Very Good and Very Bad News in the Vaccine Wars

It’s just as well that no one knows the names of the 17,253 sets of parents in California who have opted not to have their children vaccinated, citing “philosophic” reasons for declining the shots. The same is true of the anonymous 3,097 in Colorado who have made the same choice—giving their far smaller state the dubious distinction of being dead last among the 50 states and the District of Columbia in the simple business of protecting their children against disease.

On the other hand, kudos to you, Mississippi, for finishing number one—with an overall kindergartener vaccination rate in the past school year of 99.7%—and to you, Louisiana, Texas and Utah, for finishing not far behind. Your children, by this measure at least, are the safest and healthiest in the country.

These and other findings were part of the alternately reassuring and deeply disturbing survey from the CDC’s Morbidity and Mortality Weekly Report (MMWR), looking at vaccination coverage for more than 4.25 million kindergarteners and the opt-out rates for more than 3.9 million in the 2013-2014 school year

The report’s top line number seems encouraging. The national compliance rate for the three major vaccines covered in the survey ranged from 93.3% (for chicken pox) to 94.7% (measles, mumps, rubella, or MMR) to 95% (diptheria, tetanus, pertussis).

But even those numbers don’t mean America has aced the test. Vaccination rates need to reach or exceed 95%, depending on the disease, to maintain herd immunity—the protection afforded by vaccinated people to those few who can’t be vaccinated, by giving the virus too few ways to body-surf its way across a population until it finds someone who’s vulnerable. So while a 90% vaccination rate might look like an A, it in fact may be no better than a middling C.

And in some parts of the country, the numbers are much, much worse. As I reported in TIME’s Oct. 6 issue, vaccination refusal tends to be a phenomenon of the wealthier, better educated, politically bluer parts of the country—the northeast, the Pacific coast and pockets around major universities. Those are communities in which folks know just enough to convince themselves that they know it all—which means they know better than the doctors, scientists and other members of medical community at large, who have overwhelmingly shown that vaccines are safe and effective.

That’s part of the reason New York City’s elite private schools have vaccination rates far lower than the city’s public schools, and why, according to a shocking story by the Hollywood Reporter, some schools in the wealthier neighborhoods of Los Angeles have a lower vaccination rate than in South Sudan.

Digging deeper into the MMWR report, there are other, broader causes for worry. There are the 26 states plus the District of Columbia that don’t meet the Department of Health and Human Services’ guidelines of 95% coverage for the MMR vaccine. There are the 37 states that don’t even meet the CDC’s standards for properly gathering data on vaccination rates in the first place. And there are the 11 states with opt-out rates of 4% or higher.

The anti-vaccine crowd frames the refusers as part of a brave vanguard of parents who won’t be hectored into getting their children protections that they, the parents, have decided are useless or dangerous. But it’s worth remembering what the world looked like in the era before vaccines. And you don’t have to work too hard to do that, because you know what it looked like? It looked like West Africa today, where people are being infected with the Ebola virus at a rate of 1,000 new cases per week—on target to be 10,000 by December—where entire families and indeed entire villages are dying agonizing deaths, and where whole populations would line up by the millions for the protection a vaccine would offer. 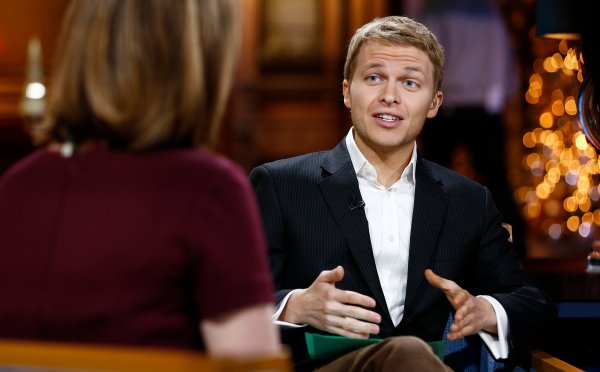 How Words Can Kill in the Vaccine Fight
Next Up: Editor's Pick