How Jet Lag Can Contribute to Obesity

Working the night shift has long been linked to an increased risk of obesity, heart attack and breast cancer. One 2011 study even showed that shift work lasting a decade or more boosts your risk for type-2 diabetes by 40%. And new study published in the journal Cell looked at why.

Researchers led by Eran Elinav, MD, PhD, senior scientist in the immunology department at the Weizmann Institute of Science in Israel, suspected the gut microbiome, which he calls “the neglected organ,” might be affected by a disrupted circadian rhythm. It wasn’t an obvious choice. Microbes hang out in the dark of our guts, so they’re never directly exposed to light and dark cycles, he says. That’s why it was surprising to find out that the microbiome is very much affected by disruptions to our bodies’ inner clocks.

Elinav started by making mice work the graveyard shift, subjecting them to a state that would be the equivalent of jet lag from an 8-hour time difference in humans. Mice are nocturnal, so in this case, they stayed awake during the day. “We saw that in the presence of jet lag, their microbes were completely messed up,” he says. The bugs changed in composition and function, losing their circadian rhythm and becoming far less efficient at tasks like cell growth, DNA repair and detoxification. Like humans, mice microbes perform housekeeping and repair functions while they sleep, and growth and energy-promoting functions when they’re awake. But in the study’s graph of these functions in jet-lagged mice, the tasks hardly vary throughout the day and are performed at much lower levels.

These mice were also more susceptible to obesity and diabetes, and when Elinav transferred their gut bacteria into sterile, germ-free mice, they also transferred the heightened risk for disease, “proving that it’s actually their microbes driving this susceptibility,” he says.

Such a theory is much harder to test in humans, of course, but Elinav studied two people traveling from the U.S. to Israel, which induced an 8-hour jet lag similar to the mice. He sampled their gut bacteria three times over two weeks, capturing the main stages of jet lag, and found that their microbes indeed changed in composition, and in ways that were startlingly similar. Elinav even transferred the humans’ jet-lagged bugs into germ-free mice. “We could very nicely see that transferring the gut microbes from the point where jet lag was at its highest induced much more obesity and glucose intolerance,” he says.

Thankfully, the gut microbes of the travelers had returned to normal two weeks after their flight, and transferring their bugs into mice no longer led to increased obesity and glucose intolerance. But the implications of the findings are troublesome for frequent travelers and especially shift workers, whose work demands a consistent disruption of circadian rhythms. 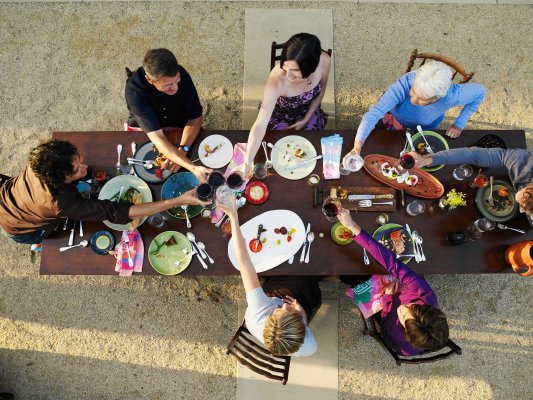 Family Dynamics at the Dinner Table Affect Kids' Weight
Next Up: Editor's Pick