In this photo provided by the Nepalese army, soldiers carry an avalanche victim before he is airlifted in Thorong La pass area, in Nepal, on Oct. 15, 2014
AP
By Rishi Iyengar

The effects of Cyclone Hudhud, which battered India’s east coast over the weekend, are being felt further north, as resultant blizzards in neighboring Nepal’s Annapurna region killed at least 20 people on Wednesday.

Officials said that nine locals, three Polish nationals, three Israelis and one Vietnamese were killed in the region’s Mustang district, according to the Indian Express. Four Canadians and an Indian also lost their lives in the neighboring district of Manang, and the search for nearly 85 others reported missing is being focused on the Thorang pass that connects the two areas.

Reuters reported that the Nepalis killed were a group of yak herders and that the search for hikers, which was called off Wednesday night local time owing to bad light and weather, resumed on Thursday morning. “One army helicopter has already left for the site and more helicopters will be pressed into service later,” said Mustang district Governor Baburam Bhandari.

This week’s disaster, which took place during Nepal’s peak trekking season, marks a bad year for the country’s tourism industry. Several Sherpa guides lost their lives in an avalanche at the base of Mount Everest in April, the worst accident in the history of the world’s tallest mountain. CNN reports that many Sherpas refused to go back up Everest after the incident, and as many as six trekking companies canceled their 2014 expeditions.

Kathmandu-based Adventure Mountain Explore Treks and Expedition are still heading out while exercising a great deal of caution and restraint in all situations.

Tika Regmi, who heads the company’s trekking and mountaineering department, says all his guides are advised to stay put during a natural disaster, or immediately descent if safe. “But some guides and Sherpas feel they need to listen to the customers’ wishes,” he tells TIME. According to Regmi, there are foreign trekkers who feel getting their money’s worth is most important and will press on despite adverse conditions. “But no amount of money is more valuable than their lives,” he says.

Three Adventure Mountain guides are currently at a guesthouse with their clients, and Regmi says it was their reading of the situation that saved their lives. Another company, whom he did not wish to name, pressed on and now has several groups missing. “It’s a natural disaster so no one can control,” he says. “We can only control our people and our guides.”

Regmi has already started receiving emails with requests for cancellations. He says the danger should pass within a week as the weather improves, but does worry about the long-term impact of these incidents.

“I’m sure it’s not a good message for people who are coming from all over the world,” he says. 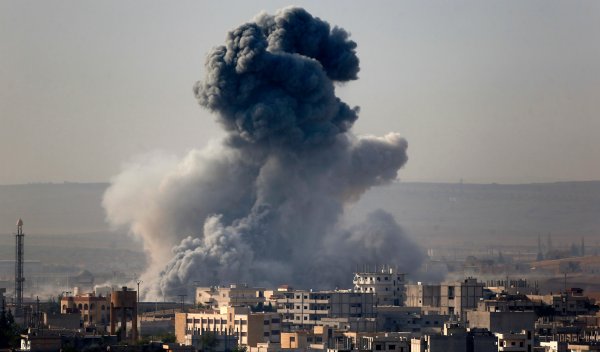 ISIS in Retreat From Syrian Border Town, Official Says
Next Up: Editor's Pick