Thai military General Prayuth Chan-ocha speaks during a press conference after receiving the royal endorsement as the military coup leader on May 26, 2014, in Bangkok
The Asahi Shimbun—2014 The Asahi Shimbun
By Charlie Campbell

Thailand’s military dictator General Prayuth Chan-ocha is facing fierce protests on his maiden trip overseas, with Thai exiles in Italy rallying Thursday against his May 22 coup, and an indignant crowd expected to gather in London on Friday to protest the botched investigation into the brutal murder of two British backpackers on the resort island of Koh Tao.

Two Burmese casual workers, Zaw Lin and Win Zaw Htun, both 21, have been arrested for rape and murder of Hannah Witheridge, 23, and murder of her friend David Miller, 24, who were found bludgeoned to death on the island’s idyllic Sairee Beach.

The mishandling of the case has made headlines around the globe.

On Tuesday, ignoring a litany of procedural irregularities, Prayuth told representatives from the British and Burmese governments that their role would be “limited to observation” as both nations must “respect our processes,” reported the Bangkok Post.

The investigation has been dubbed “a perfect job” by Thai police chief Somyot Pumpunmuang, but is in fact an “appalling mess” according to Felicity Gerry QC, a prominent British defense lawyer specializing in high-profile sexual-assault cases.

Her condemnation echoes those of Amnesty International, Human Rights Watch, Thailand’s forensics’ chief, the U.K. government and the victims’ families.

Reports have emerged that Zaw Lin and Win Zaw Htun were beaten and threatened with electrocution during interrogation. (The Thai police robustly deny the allegations.)

They were also forced by police into a macabre re-enactment of the murder, which, Gerry tells TIME, is “bound to prejudice everything and does the victim and victims’ families no good at all.”

Tourists have also been allowed to visit the crime scene and the handling of evidence has been condemned.

Meanwhile, on Tuesday, a witness hearing was called by Koh Samui Court, but the defense team, having just flown in from Bangkok, was permitted just half an hour to meet the suspects.

It was “just enough time to explain what is a lawyer, why you need a lawyer and what does a lawyer do for you,” says Andy Hall, a Thailand-based migrant labor activist helping to organize the defense.

A request to postpone the hearing to allow adequate time for the defense to prepare was thrown out by the judge, who claimed defense witnesses posed a flight risk, even though the witnesses were employed and legally resident in Thailand — coveted status for migrant Burmese.

“It makes absolutely no sense why, in such a sensitive case, the court would rush hearings and it once again undermines the accused’s right to a fair trial,” says Hall.

Back in the U.K., the distraught families of Miller and Witheridge can only watch and pray. “As a family we hope that the right people are found and brought to justice,” said Witheridge’s family in a statement last week. 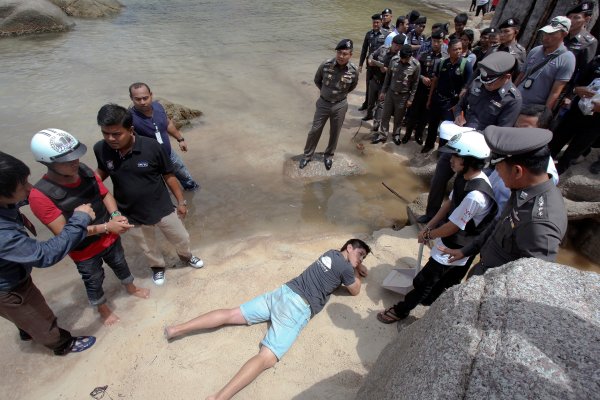