How to Escape the Friend Zone

For a while, I assumed that guys put me in the friend zone because they didn’t want to date a plus size princess (what I affectionately call myself.) But, really, I think it was my own insecurity that was the problem. By holding myself back instead of going after what I wanted, I was the one guilty of putting myself in the friend zone.

In fact, somewhat recently, I realized that many of the guys I’ve had crushes on would totally have dated me, but since I gave the impression that I wasn’t interested, they followed my lead and dropped pursuit. When I was 13, I spent every night talking on the phone with a cute, ginger-haired boy named Kevin. I wanted him to be my boyfriend so badly, but I convinced myself that he’d never go out with a chubby brown girl, so I hooked him up with my little blonde best friend. (Fast-forward about 15-odd years, and Kevin and I actually did end up dating for a while. You might call it my childhood dream come true, and you can read all — well, maybe not all — the mushy details here.)

Then, when I was in college, I fell for an older, thoughtful poet. He was beyond dreamy, and although we’d watch movies in the dark at each other’s houses all the time, nothing romantic developed between us and now I understand why. As fate would have it, I was forced to face my friend-zoning tendencies when I ran into the poet last year at a party and jokingly said “I had the biggest crush on you, but you weren’t interested.” He looked shocked and reminded me that whenever he’d invite me over to watch a movie at his place, I’d just curl up into a tight ball on the opposite side of the couch. My body language had told him everything he needed to know.

The thing is, I’m a big proponent of starting things off slowly — developing a friendship first. But, I had trouble getting past that whole friendship part. There was no doubt I had to change some habits if I wanted to let love in. One thing that helpd me leave the friend zone was accepting the vulnerability that’s attached to being a part of an intimate relationship. Being a guy’s best friend was a position I was comfortable in. I knew how it worked, and I knew the pain that came when he eventually and inevitably started dating someone else. I chose to put myself in the friend zone because it was safe: I knew the score.

I almost never told guys I liked them, because I was terrified of the unknown — terrified of putting myself out there. I didn’t want to be the first one to admit I wanted something more from the relationship. Instead, I was willing to sit back and wait, while pretending I didn’t care either way. I was lying to them and I was lying to myself.

Another thing I needed to recognize was that everyone has a fear of rejection — including all of my male friends throughout the years. My own fear of rejection is based on my weight, but I was also using it as an excuse to keep a wall up and not let my guard down. I can’t even imagine how frustrating it was for my poet crush to want to make a move on me when I was literally curled into myself. What’s worse: By building these invisible barriers of protection around myself, I was essentially asking my would-be boyfriends to try and get through them. And that wasn’t fair at all.

In the midst of these self-discoveries, I was in a friendship where I constantly heard, “Awww, you guys are so cute together; why AREN’T you dating?” and “He CLEARLY likes you, what’s going on?” One day, not too long ago, I made a decision to step out of the friend zone and let my buddy know I was interested in being more than just pals. The conversation started awkwardly at first, as I rambled on about our relationship and how great I thought he was. Somehow, I got the courage to tell him that I felt a chemistry between us and was interested in exploring that. We talked it through and in the end, he suggested taking me on an actual date. Robert and I have been dating ever since.

What I’m saying is this: It can be very tempting to hide behind our insecurities, whatever they are. It often feels easier than taking brave, bold steps, except I learned that taking those strides leaves me far more fulfilled than hanging out in that easy place. I almost always challenge myself to make the harder choice, and I can confidently say that I’ve never regretted putting myself out there. If you’ve been spending too much time in your “friend zone” — in work and/or play — then maybe you should step out of it and see where that takes you.

On her blog, Plus Size Princess, CeCe Olisa has detailed everything from what it’s like to be the only big black girl in a yoga class (fine, thanks!), to her adventures in plus-size dating in the Big Apple. Now, the New York City transplant is lending her poignant, often-hilarious voice to R29. 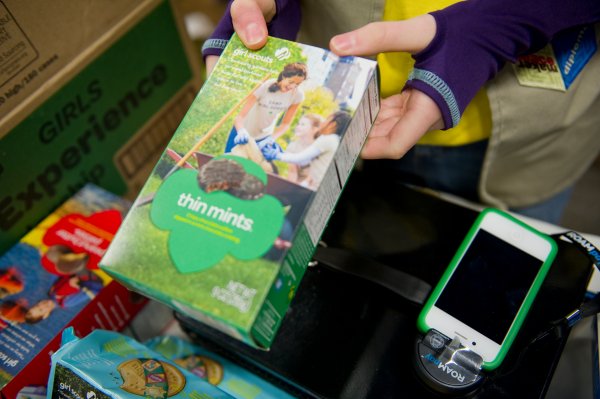 These Are the Best Craft Beers to Complement Your Girl Scout Cookies
Next Up: Editor's Pick