The Kansas City Royals Are the Future of Baseball

Sure, the Kansas City Royals are an intriguing tale for the typical rags-to-riches reasons. A team that hasn’t made a post-season appearance in 29 years becomes the first team in baseball history to win its first eight games in the playoffs. On Wednesday afternoon, the Royals beat the Baltimore Orioles 2-1 in Game 4 of the American League Championship Series, completing a sweep and sending the team to the World Series.

But the Royals are more than just an enchanting small-market success story. They represent the changing game of baseball.

In the post-steroid era, the game is going through a remarkable transition. Power is out. Pitching, speed and defense are in. Home runs per game are at their lowest levels since 1992. Teams scored 4.07 runs per game during the 2014 regular season, according to stats site Baseball-Reference.com–the lowest total in 33 years. Runs-per-game are down 15% since 2007, and off 21% from their steroid-era high of 5.14 in 2000. Players are striking out 7.7 times per game, an all-time record, breaking the prior high of 7.55 set last season. In fact, in each of the past seven seasons, baseball set a new all-time high for strikeouts per game.

Enter the Royals. The Royals had the fewest home runs in the majors this past season, with 95. But no team had more stolen bases, and the Royals have kept running this post-season. The team has stolen 13 bases so far: seven of them came in Kansas City’s wild 9-8 comeback win over the Oakland A’s in the AL Wild Card game.

The last big-league club to reach the World Series while finishing last in home runs, but first in swipes, was the 1987 St. Louis Cardinals. Those Cardinals teams of the 1980s played an exciting brand of “small-ball” throughout the decade: the ’82 Cards finished second in steals, and last in home runs, and won it all (the ’82 Oakland A’s finished first in steals, thanks to Rickey Henderson’s 130 swipes, a modern-era, single-season record that still stands).

For the Royals, that speed pays off in the field too. According to FanGraphs.com, Kansas City players collectively finished with the highest Ultimate Zone Rating (UZR) – an advanced metric that measures defensive value – in the majors. Kansas City’s outfield, with three-time Gold Glove winner Alex Gordon in left, Lorenzo Cain in center, and defensive replacement Jarrod Dyson shoring up center field in the late innings (Cain then usually moves to right), have baseball analysts raving. “Let’s be clear what we’re talking about here,” wrote Sam Miller of Baseball Propectus. “We’re not just talking about a good outfield, or a great outfield. We’re talking about what one might decide to argue is the greatest defensive outfield of all time.”

The Royals have found a winning formula. These days, if you swing for the fences, you’re more likely than ever to strike out. So just put the ball in play – Royals hitters have both the lowest strikeout rate in the majors, and the lowest walk rate – and take your chances with your legs. Steal bases to eke out those diminishing runs.

Since today’s pitchers are better keeping balls in the park, if your opponent does make contact, make sure you have players who turn these balls into outs. (Like third baseman Mike Moustakas diving into the stands). Let the big-market New York Yankees and Los Angeles Angels overpay for aging sluggers who will inevitably depreciate at the back-end of their ludicrous contracts (Alex Rodriguez, Josh Hamilton, Albert Pujols). Small-ball is cheap, and effective. This is where the game is heading. The Royals just do it best.

Read next: The 7 Greatest Trick Plays in Sports Movie History 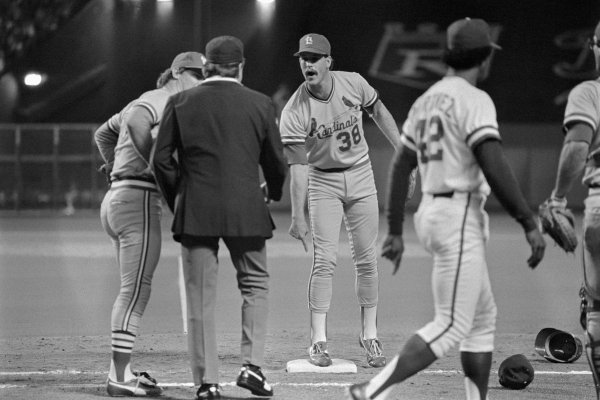 The Ump Who Blew the '85 World Series Wants a Rematch
Next Up: Editor's Pick