The Most Talked-About Celebrity Bangs of All Time

Beyoncé got bangs, and people have feelings about it.

Is the super short, Bettie Page-inspired fringe the Bangpacolyspe? “Vintage but not cheesy”? A Blue Ivy art project? Proof that Queen Bey has bad hair days just like us? Absolutely none of our damn business? It’s all a matter of opinion… that will be shared again and again on Twitter.

For whatever reason, emotions run high when it comes to celebrity bangs.”If you’re going with a black eye or bangs, go with the black eye,” actress Kaley Cuoco said after getting skewered for embracing the fringe on a 2013 red carpet. And so, in the name of journalism, we have compiled a list of the most influential — and at times, “controversial” — celebrity bangs.

Here’s the 1950’s pin-up said to have inspired Beyoncé. If you’ve had any impact on Beyoncé, you’re obviously one of the most influential beings on the planet.

“This is my midlife crisis,” FLOTUS told Rachel Ray, “jokingly,” in a 2013 interview. And oh, what a bold statement the bangs were. The Wall Street Journal noted: “These aren’t the kind of subtle, side-swept bangs that some women favor, including Duchess Kate. Rather, Mrs. Obama opted for full-on, forehead-covering fringe. It’s a bold move at a high profile time for the First Lady, just days before President Obama’s inauguration.” The Cut prematurely mourned the loss during Obama’s Bowie State commencement speech, but The Daily Beast was quick to assure concerned masses that “they’re still on her head… she just parted her hair differently.”

(The bangs have since retired.)

But, “were Michelle Obama’s bangs inspired by Kerry Washington?” The Daily Mail (and others) wondered. FLOTUS does binge-watch Scandal.

Michelle isn’t the only woman in politics to make waves with her choice of bangs. Hillary Clinton’s January 2014 bangs were “oddly controversial,” Bustle noted, as other publications questioned what her “bangs mean for America.” Imagine if Clinton had sported bangs and her infamous scrunchie? Then the Union would have been put in a tailspin.

The New Girl star and hipster icon isn’t just known for her bangs, as Buzzfeed points out, she is hardly recognizable without them.

It turns out that Zooey Deschanel is virtually unrecognizable without her bangs http://t.co/OGqoxzusd8 pic.twitter.com/9IahXU03fZ

I want this bang hair cut with some side hair falling. #DevilWearsPrada #AnneHathaway #Hair pic.twitter.com/ZzikacVNqN

Yes, Anne Hathaway often sports bangs in real life. But this isn’t about Anne Hathaway. This is about her character Andrea Sachs in The Devil Wears Prada. Andrea was nothing without bangs. Nothing. And after she got them, she became everything, inspiring little girls everywhere to don the haircut that goes hand in hand with being a successful assistant to a high-powered, mercurial fashion editor.

The look was created for Mara’s role as Lisbeth Salander in The Girl with the Dragon Tattoo. Vogue dubbed this ultra chic individual’s adoption of blunt bangs, “The Rooney Mara effect.” 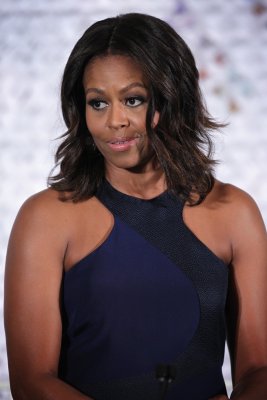 Even Michelle Obama Was Awkward and Self-Conscious in Middle School
Next Up: Editor's Pick