Obama Sightings Will Be Rare This Election Season

U.S. President Barack Obama heads to the Marine One helicopter to travel from the White House to Andrews Air Force Base for a meeting with foreign defense chiefs from more than 20 countries including Turkey and Saudi Arabia on strategies for fighting Islamic State, in Washington D.C. on Oct. 14, 2014.
Jim Bourg—REUTERS
By Zeke J Miller

President Barack Obama will be all but absent from the Democratic campaign trail this midterm election season, appearing in just seven campaign rallies in blue-leaning states before election day Nov. 4.

Increasingly a political liability for his party, Obama will appear with just one Democratic candidate for the Senate, Gary Peters in Michigan, as his party struggles to hold onto a majority, a White House official said.

The president’s poll numbers are near historic lows, and in contested races, Democrats believe Obama’s endorsement would be a lead weight for their candidates. Republicans have run tens of millions in ads tying Democrats to Obama, as Democratic candidates have tried to argue their independence from him.

Democratic governors may prove to be the bright note in an Election night forecast to be generally dismal for the party next month, with Republican odds of taking the Senate increasing and House Democrats preparing for a net loss of seats. 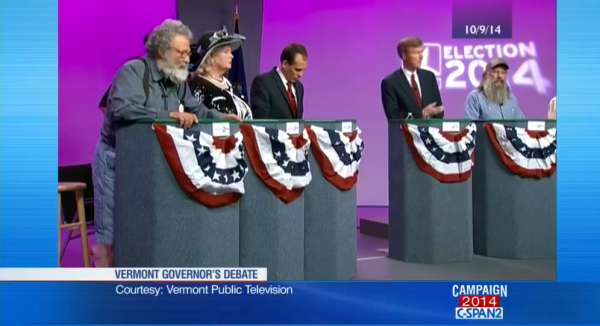 America Needs More Crazy Debates Like In Vermont
Next Up: Editor's Pick