When it comes to Ebola, the full-body Personal Protective Equipment [PPE] suit is probably the best way to prevent infection. But a PPE can also be one of the easiest ways to get Ebola. A PPE is usually made up of a full-body, impermeable suit with a hood, rubber boots covered by Tyvek booties, multiple pairs of surgical gloves, a surgical mask over the nose and mouth, a plastic bib, goggles, a plastic apron and a lot of duct tape. There is a reason why they are nicknamed moon suits: worn properly, they shouldn’t show an inch of skin. Putting them on right requires two people and about 10 minutes. Taking them off, in even the best of circumstances, is a clumsy, arduous process with multiple opportunities to make a lethal mistake.

It is not yet clear how, exactly, two health care workers at a Dallas hospital tending Thomas Eric Duncan, the first man to be diagnosed with Ebola in the United States, caught the disease, but health authorities are looking closely at the protective measures used at the hospital, and whether or not they were sufficient. Meanwhile, in Spain, where a nurse, Teresa Romero Ramos, is being treated for Ebola that she caught from a patient recently returned from Sierra Leone, officials are questioning whether or not she wore her PPE properly. On a Spanish television program quoted by the New York Times, Madrid’s regional health minister, Javier Rodríguez, questioned the need for extensive training on using the PPEs. “You don’t need a master’s degree to explain to someone how you should put on or take off” a protective suit, he said.

Maybe not, but no matter how experienced and qualified you are in putting on and taking off a PPE there is always room for error. I recently spent two weeks in Monrovia, Liberia, reporting on Ebola, and climbing into, and out of, PPEs on a regular basis, and I am still not sure I ever got it right. I was trained by the best, too: the Red Cross Dead Body Management teams, the guys responsible for picking up deceased Ebola victims and transporting them to the crematorium for safe disposal. An Ebola patient is at his most infective in the hours and days after death, when the virus swarms the skin and bodily fluids.

When the Dead Body Management team workers finish zipping a corpse into a double-sealed body bag they undergo an extensive decontamination process that best resembles a military drill in its precision and attention to detail. Each worker is paired with a sanitizer, a man wearing a backpack sprayer filled with a chlorine and water solution. The process is initiated with a good dousing of chlorine solution and a vigorous washing of the gloved hands. The worker removes his goggles, which are sprayed thoroughly and then discarded. His hands are sprayed again. Then the hood goes down, and the zipper is sprayed, as are the hands for another time. He unzips, and his hands are sprayed yet again. Then he has to shrug out of the suit without allowing any of the external surfaces to come into contact with his hands or the clothing underneath. And so it goes, layer after layer until the worker is left standing in boots, medical scrubs, and the last pair of gloves. Again he is liberally sprayed down with the chlorine solution, at which point he has to jigger off his gloves in a way that ensures that the surface does not come into contact with the skin.

Each organization, be it the Red Cross or Médecins Sans Frontières [MSF], has a similar ritual, even if small details vary. Still, mistakes are made. Even MSF, which has spearheaded the Ebola response in west Africa since day one, and probably knows more than any other organization about how to prevent infection, has seen two international health workers sickened with the disease. A United Nations medical worker infected in Liberia and transported to Germany for care died on Oct. 13. A doctor working for an Italian medical charity contracted Ebola last month, and is still receiving treatment in Germany.

The gear works, but the possibility of human error is still high, especially when working in a high-stress environment, when fatigue and fear stalk every move. PPEs can also provide a dangerously false sense of security. When they are not put on right, or if they are taken off incorrectly, they may as well not be there at all.

If you are lucky the droplet of sweat dropping into your eye as you remove your goggles without bending over first didn’t pass over some Ebola-contaminated material on your hood. I met one health care worker who thinks he caught Ebola when a young patient vomited on him, and the vomit passed through a chink in his Tyvek armor, where his suit didn’t entirely zip up over his mask. Both he and the patient survived. Which is why having the right kind of protection is only the beginning. There needs to be training, and it has to be drilled in daily. There needs to be a buddy system, in which one health care worker is always watching the other, to ensure that the protective gear is on correctly, and that it is taken off correctly. But there will always be mistakes. Ebola will get through. The important thing is to be ready when it does. 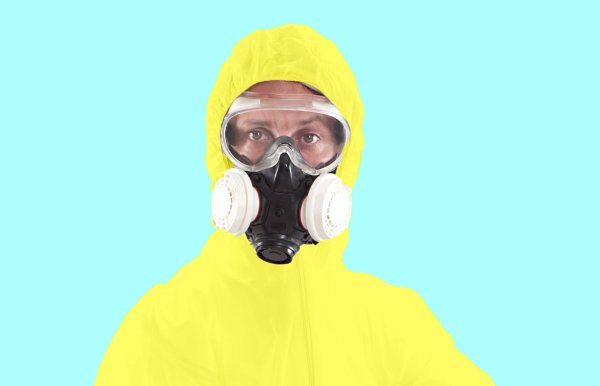 The Ethics of Wearing an Ebola Costume for Halloween
Next Up: Editor's Pick