He’s not kidding. Fury, writer-director David Ayer’s war film to end all war films (fingers crossed), begins with Wardaddy killing a German cavalry officer with a knife, then cutting his eye out as a souvenir. It ends, a draining two hours and 10 minutes later, in a battle that makes the Alamo look like a pie dessert — à la mode.

This is War Movie 101: all fighting, nearly all the time. Ridley Scott’s Black Hawk Down pictured a similarly unrelenting siege (Somalia), as did, in a fantasy landscape, The Lord of the Rings: The Two Towers (Rohan). Saving Private Ryan traced an American unit’s trajectory across World War II–era France, and Platoon and Full Metal Jacket, once that film got past the fatal hazing of basic training, submerged the viewer in the Vietnam nightmare as seen by its edgy American invaders. Fury doesn’t come close to the achievement of those edifying cinematic ordeals, let alone to Samuel Maoz’s harrowing Israeli film Lebanon, which summoned a claustrophobic psychopathy by setting virtually all its action inside an Israeli tank. But Ayer’s movie has the admirable ambition of showing how even the Greatest Generation could brutalize and be brutalized by war.

Brad Pitt, you’ll recall, already won World War II in Inglourious Basterds. Hell, last year he won World War Z. So how can he and the near victorious GIs of the 2nd Armored Division be established as underdogs in a movie set in Germany in April 1945, just a few weeks before Hitler would blow his brains out in a bunker? Ayer’s solution: put ’em in a tank, where their rumbling weapon was far outclassed by the enemy’s. Henry Ford produced the Americans’ thin-skinned Sherman tank; Ferdinand Porsche designed the Germans’ much larger, sturdier Tiger. It was, essentially, the Tin Lizzie vs. the Mercedes-Benz Super Sport.

And though World War II would shortly end, the U.S. soldiers couldn’t take it easy, like college seniors in the final term before graduation. Their mission was to roll through Germany, whose Nazi leaders called for every citizen to fight the invaders to their death. To the Americans, each person they meet is a potential sniper; every man, woman and child is cannon fodder. Some of the soldiers became efficient killing machines. Some of them may have liked it.

Norman, who looks about 12 and takes most of the movie to grow stubble on his sweet peach face, doesn’t like killing, doesn’t want it and, when he’s drafted as Wardaddy’s gunner, doesn’t know how to do it. His first job is to scrape the remains of his predecessor off the insides of the tank, nicknamed Fury. He is the token innocent, the audience surrogate, almost the girl joining a quartet of grizzled veterans.

Because their characters are reduced to their religious, ethnic or lowlife stereotypes, they may as well be called Bible (Shia LaBeouf), Mex (Michael Peña) and Animal (Jon Bernthal). Their tour has taken them to hell and halfway back, which makes them the rude tutors in Norman’s life-or-death indoctrination. “The war’s gotta end, soon,” Wardaddy says, in one of the boilerplate truisms that serve as this movie’s dialogue. “But before it ends, a lotta people gotta die.”

Sometimes, even a little death is a lot. Conquering one village, Wardaddy and Norman enter a house that holds two frightened young German women, Emma (Alicia von Rittberg) and Irma (Anamaria Marinca, star of the Romanian prize winner 4 Months, 3 Weeks and 2 Days). Irma makes lunch for Wardaddy, who sends Norman off to the bedroom with Emma in what may be their mutual deflowering. The assignation is meant to be tender, but the viewer has to wonder if Emma (or for that matter, Norman) is a willing participant, and if the scene doesn’t carry the lingering toxicity of sexual violence. Then the other tank troopers barge in, and Animal uncorks a flood of insults that amount to assault. By velvet glove or iron fist, barbarism rules.

That, Ayer would argue, is just war, daddy. And in staging his big battle sequences, he brings Fury to fitful life. The attack of three Shermans on a giant Tiger is choreographed for maximum impact, as is the looming face-off between Wardaddy’s crippled tank and about 300 SS troops marching toward it. Pitt, who at 50 still looks great with his shirt off, has the gruff charisma to play a dauntless soldier with killer courage and a vestigial streak of humanity.

He carries a film that could stumble under the burden of its clichés. You know that when one character who’s chomped out bits of Norman’s callow butt for most of the movie finally makes gentle amends, he’ll be the next to die. And that another character, having faced death countless times by German fire or misadventure, will survive through an act of enemy kindness. World War II was a historical event, but also a movie genre, and Fury occasionally prints the legend. The rest of it is plenty grim and grisly. Audience members may feel like prisoners of war forced to watch a training-torture film.

The original version of this story misspelled the name of Brad Pitt’s character. It is Don “Wardaddy” Collier. 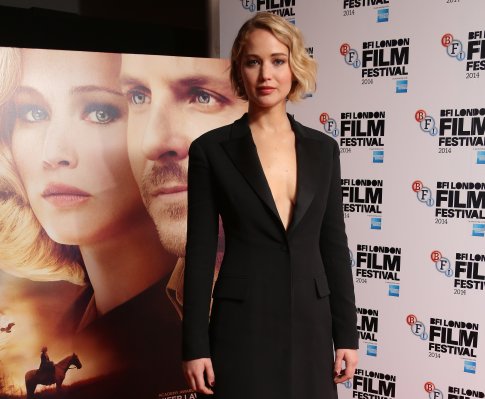 Jennifer Lawrence Starred In a Movie, and You Can't See It
Next Up: Editor's Pick