No One Should Be Excited About Winning the Senate

When all is said and done next month, hundreds of millions of dollars will have been spent to influence a few million voters who will determine the balance of power in the U.S. Senate.

Behind closed doors, Democrats readily admit their Senate agenda is dead in the water, whether they win or lose. Republicans agree their pitch to radically alter the course of Washington by picking up a few seats after November is essentially a fairy tale. In conversations with more than two-dozen operatives and party strategists, none was willing to make the case against winning the Senate with their name attached, wary of upsetting those who have invested do much in the cycle. But several on both sides of the aisle argued that winning could actually be a bad thing in the long run.

“The irony of this cycle is that hundreds of millions are going to be spent fighting over an outcome that won’t impact the policy American’s see out of Washington one bit,” said one senior Capitol Hill Democrat. “If Democrats lose the Senate, the 2016 Democratic nominee can run against Congress and Senate Democrats would be poised to recapture it in two years. Unless or until the House changes, Washington won’t change.”

Republican operatives are quick to say the same about control White House, but express outright worry about the impact of taking the Senate their chances of doing so in 2016. “We’re promising people that things will dramatically change if we win the majority, but we all know that’s not going to happen,” said a Republican operative working on Senate races. “Where will that leave our candidates in 2016?”

In many circles, the talk is more than just a defeatist attitude. It’s strategic question that has rarely been voiced publicly. Operatives on both sides see upside in being in the minority next year. In Democrats’ telling, likely-candidate Hillary Clinton could run on a narrative of Republican obstruction to passing legislation on issues like income inequality, raising the minimum wage, and equal pay for women. Republicans, looking to boost a bench of governors eyeing the White House, see a potent message in allowing them to rail against Washington dysfunction.

“It really is a kind of prank prize, but more for Democrats than Republicans,” said Republican consultant Rick Wilson. “For the GOP, the chance of a Senate majority to block Obama’s Supreme Court nominees is worth all the agony, trouble, hard choices, and put-up-or-shut-up problems.”

Republicans know they may have substantially less latitude, not more, to oppose President Barack Obama outright if they gain the majority. They may be able to oppose specific nominees, but would be wary of earning an obstructionist title in practice, lest their 2016 candidates go down in flames. Others point to the fleeting nature of the potential Republican pick-up, with the GOP facing an unfavorable map in 2016 that is likely to result in losing seats.

Ultimately the biggest winners and losers are the Senators themselves, with the potential to see their power dramatically increased or diminished as committee chairmanships and the Senate agenda hang in the balance.

The primary fear among Democrats is nominations, particularly the potential or a vacancy on the Supreme Court, which Obama alluded to in conversations with donors this summer. After that, former Harry Reid aide Rodell Mollineau said, it’s about controlling the conversation in Washington. “Do you really want to spend the next two years on defense talking about national right to work laws and whatever harsh immigration policies Republicans come up with, or would you rather have a conversation about jobs and minimum wage,” he said.

On the Republican side, operatives now see the building up of expectations as necessitating a win, following the party’s 2012 defeat and inability to take the Senate during the 2010 wave. “Another loss would only further send the party’s political infrastructure down a spiral that will be hard to dig out of in time to fight against Hillary in 2016,” said one Republican operative focused on 2016 races. “We need momentum excitement coming out of November to get supporters engaged so we can start building the political behemoth that will be required to take on Hillary.” 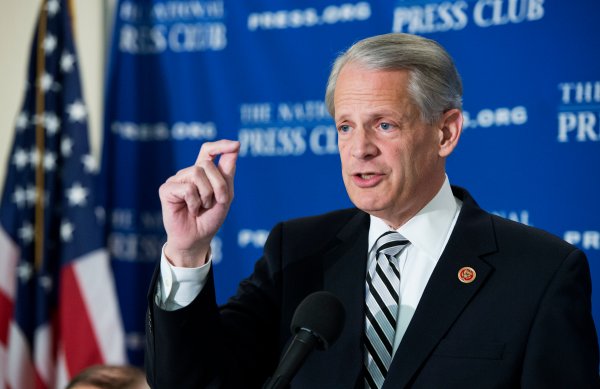