I Delivered One Healthy Baby and One Deceased Fetus

My husband and I spent several months debating the merits of adding one more chick to our crowded, muddy, Lego-filled nest.

We were already the (rapidly aging) parents of three boys, and our lives were chaotic and busy and full. But when I looked at my dining room table, there was an empty chair; a perfect, baby-sized space.

So, before we hung up the going-out-of-business sign, we decided to *ahem* try vigorously for exactly one month, trusting the universe to make the magic happen… or not. If it wasn’t meant to be, we would fast-track the vasectomy and put the crib on Craigslist. We shook on it.

Determined to make this month count, I stocked up on prenatal vitamins, exercised, tried to get some extra rest, and started each morning with a kefir, chia seed, and bee pollen smoothie. Weird? No. At least not compared to the salt crystals and wooden spoons and moon charts scattered about our bedroom. People may dismiss those tactics as old wives’ tales. I say, EXACTLY. When it comes to pregnancy and childbirth, ancient feminine wisdom is everything.

Voilà. Two weeks later, two pink lines. Two really dark pink lines, that appeared several days before my period was due. A blood test confirmed it, and three weeks later we had the first ultrasound. We did not see a fetus. We saw fetuses. Twins. In an instant, we gained entrée into the wild world of multiples; a place where people say things like, “But a minivan isn’t big enough,” and mean it.

It didn’t take long for the twins to become known collectively as Cuatro Cinco. After the initial shock, we rolled with it… as most parents learn to do. The universe (and probably those mystical Mayan chia seeds) had indeed provided. So, we researched double strollers and creative ways for me to consume the recommended 100 grams of protein I would need to choke down each day, queasy or not. I began to love having a “they” in my belly and pictured them curled together like a Yin-Yang symbol.

I’m not sure the term ballooning does justice to what was happening to my abdomen. By 14 weeks, I looked seven months pregnant. The twins were growing like those capsules you put in water and five minutes later — dinosaur sponges! The genetic testing had indicated all baby-systems were go. It also revealed the presence of a Y-chromosome, so we knew we were about to welcome a little brother, and possibly two.

During my 15-week ultrasound we saw one fetal exhibitionist, sprawled on his back, arms and legs flexing (Ultrasound tech: “Well, I know it’s early, but there’s your Y chromosome”) and one calm fetus, breech with both legs tucked under itself like a yogi, peacefully resting off to my left side. I felt like I knew them both already.

And then I started shrinking.

Suddenly, I could wear pre-pregnancy clothes again. I chalked it up to being in the second trimester and having less bloating. But by 18 weeks, I looked just like I had in previous pregnancies. I called my obstetrician’s office and shared my concerns. They had me come in and a nurse listened for fetal heart tones. She was sure she heard two distinct heartbeats, and I was comforted enough by that to hold off on an ultrasound for another two weeks. She was wrong, but it didn’t matter. What was done had happened weeks ago.

At 20 weeks, we had our Level II ultrasound. It was finally time to examine all the pieces and parts times two — and hopefully learn the sex of modest Baby B. Instead we learned that there would be no Baby B.

The monitor on the wall showed only stillness. No blood flow, no heartbeat. Just a tiny fetus already being dwarfed by its robust and thriving brother. I say “it” in absence of a gender-specific pronoun; we never learned the sex of Baby B. The fetus was already being compressed and flattened when the loss was discovered. The medical term for this is fetus papyraceous — meaning “like parchment.” Measurements showed a femur length of 15 weeks, 1 day. I watched the rest of the ultrasound in a daze, palm to sweaty palm with my husband, regretting each “I can’t handle twins” thought I had allowed to creep in my brain.

Later that afternoon, we tried to be stoic; pragmatic. We shared the news with family and friends, presented in medically accurate terms and wrapped in the appropriate platitudes. Better to know now. Nature is wise. Everything happens for a reason.

The following day was July 4th. I never felt less like celebrating in my life, but we still had three rambunctious boys who understood little of the loss, and who were ready to barbecue, swim, and watch fireworks in the park. Life needed to go on.

Still, I remember stepping outside to pull a few weeds and slowly collapsing to my knees in the grass, sobbing into handfuls of dandelion. I’m sorry… I’m sorry… I’m sorry. I’m so sorry, Baby. Was it that vigorous bike ride? That cough that wouldn’t quit? How had I failed this little one who was still inside my body but who I would never hold? That day was the worst — drowning in reality and permanence.

My wonderful, long-time obstetrician assured me that nothing I had done caused this. He said often a later loss like ours indicated an issue with the umbilical cord, maybe even something as simple as a knot. I know that was meant to make me feel better. All I could think was, “A fucking knot?” This fetus did one too many somersaults and that was it? I would have preferred to hear something about inevitability, or incompatibility with life, rather than the suggestion of simple bad luck.

Days passed. Kind friends brought food and blooming plants, gestures of love when finding the right words proved difficult. Several times I was told to look at the bright side: “At least you still have one.” This truism always seemed to suck the air from my lungs, unintentionally minimizing my grief and leaving me feeling both guilty and ungrateful.

The tears eventually decreased, but my anxiety about the health of my surviving twin remained. I bought a portable fetal Doppler. Several times a day I would drop everything and listen for my baby’s steady heartbeat and his subtle movements, screeching at full-volume through my headphones like a needle dragged across a record.

The remainder of my pregnancy was difficult. I was hospitalized for a week in August due to a mystery virus that left me feverish and fatigued. Shortly afterward, I was diagnosed with the painful pressure of polyhydramnios (excess amniotic fluid) and two weeks later, gestational diabetes. Thankfully, none of this seemed to faze our son. He was and is a champion.

My final pregnancy ended via Cesarean. The doctor held up a beautiful 10-pound boy who immediately hollered and peed on everyone before nuzzling into my neck between electrodes. Minutes later, per previous discussion, doctors showed us the remains of our fetus. My eyes were blurry from anesthesia, but I remember seeing something shaped like a 3-inch long, flattened kidney bean attached to a gingko leaf… our Baby B and her/his placenta. A photograph was taken with our consent for scientific and educational purposes, but I have never seen it.

It’s hard to believe how quickly time has passed. My son is now 11 months old and he is a cheerful, inquisitive baby. He has adopted the tranquil nature we first observed in his twin; in a crowded room it can be easy to forget he’s there, smiling and quietly surveying the scene. My main concern now is to provide him with a life so rich and fulfilling he will not have time to dwell on any sense of loss lingering in his heart.

I have read the blogs and been to the online support groups for twinless-twins. Many members, even those who lost a twin at birth or in utero, report feeling an incompleteness or melancholy later in life, in some cases guessing the existence of a co-multiple sibling before they were ever told. So, there will be no secrets. I just want to make sure we address any concerns the right way and at the right time, avoiding the unintended consequence of creating guilt or sadness that may never have existed otherwise.

For now, I will do nothing but appreciate each baby-squeal of discovery and each joyful “Mama!” directed my way. Although the tiny hole in my heart will likely remain, I believe I am mothering the four children who were meant to give my life purpose. They teach me humility, bring me to happy tears, remind me why I don’t need to spend money on nice things, and allow me to swell with pride at their impressive use of sarcasm.

Platitude or not, nature IS wise. Everything does happen for a reason… if only to make us aware of our own strength, endurance and capacity for love. 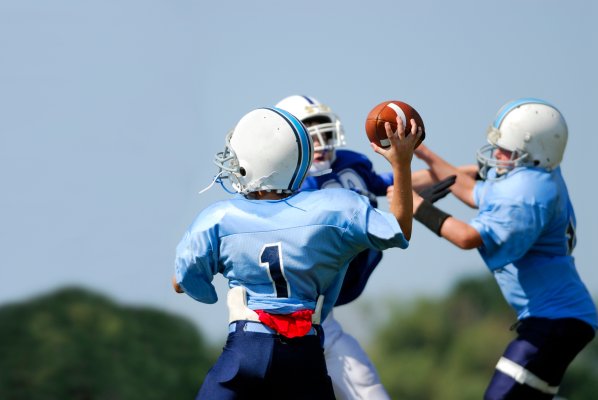 Parents Deeply Concerned About Injuries in Youth Sports
Next Up: Editor's Pick