Iraqi civilians sift through rubble in the ruins of homes that were damaged by fighting after an attack from the Islamic State group, in the town of Heet, in western Anbar province, Iraq on Oct. 6, 2014.
AP
By David Stout

Iraqi security forces evacuated another military base in restive Anbar province on Monday in the face of an offensive by the Islamic State of Iraq and Greater Syria (ISIS).

The base is the latest in a string of military installations to fall into ISIS hands, according to CNN. Its abandonment comes less than two weeks after ISIS fighters captured nearby Heet on Oct. 2, which lies just 85 miles west of Baghdad.

“Our military leaders argued that instead of leaving those forces exposed to attacks by ISIS, they would be best used to shore up the defense of Asad air base,” a senior Iraqi security official told the Agence France-Presse.

On Monday, the U.N. said that an estimated 180,000 Iraqis have fled Heet since it fell earlier this month to the radical Islamist group, which continues to cleave away large swaths of the country’s Sunni heartland from central government control.

“The town was one of the few parts of the governorate where humanitarian aid has been delivered in recent months,” read a report released by the U.N.’s Office for the Coordination of Humanitarian Affairs. “This is the fourth major displacement in less than a year in Iraq.”

ISIS is currently believed to control 80% of Anbar province, which is home to a majority of Iraqi’s Sunni population.

Over the weekend, reports circulated that ISIS fighters had also infiltrated the suburb of Abu Ghraib on Baghdad’s outskirts that lies just 8 miles from the capital’s airport.

On Sunday, U.S. Joint Chief of Staff General Martin Dempsey made a candid admission that Apache helicopters were deployed earlier this month to prevent ISIS fighters from overrunning Iraqi security forces just 15 miles from the terminal.

“The tool that was immediately available was the Apache. The risk of operating in a hostile environment is there constantly,” Dempsey told ABC’s This Week.

“And had they overrun the Iraqi unit, it was a straight shot to the airport. So, we’re not going to allow that to happen. We need that airport.”

A U.S.-led coalition of nations continued to launch fresh air strikes against ISIS personnel and infrastructure in both Iraq and Syria this week; however, analysts say the aerial assaults have largely failed to reverse the group’s momentum on the ground. 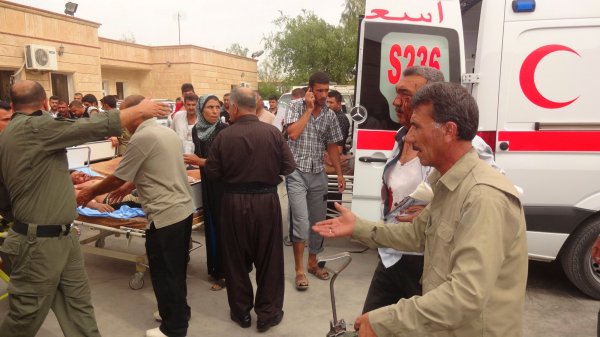 60 Dead in Iraq Bombings
Next Up: Editor's Pick