A man stares at the blazing government headquarters in Chilpancingo, in Mexico's Guerrero state, on Oct. 13, 2014, after protesters set it on fire during demonstrations demanding the return of the 43 students still missing since an attack by rogue officers earlier this month
Yuri Cortez—AFP/Getty Images
By Per Liljas

Protesters looted and burned part of the government headquarters in Mexico’s Guerrero state during demonstrations demanding the return of 43 students who have been missing since a gang-connected police attack a few weeks ago.

No injuries were reported as the invading group of teachers and students allowed workers to leave before torching the complex, but five teachers and two police officers have been wounded in previous clashes between protesters and police, Agence France-Presse reports.

The 43 students have been missing since municipal police fired at their buses on Sept. 26. Authorities say they are waiting for DNA results from several mass graves that have since been discovered. The city’s mayor, his wife and the police chief have evaded questioning in a case that has enraged the Mexican public and brought tens of thousands on the streets.

“Starting tomorrow [Tuesday], we will increase our actions and radicalize our movement if the governor does not give information about the students’ whereabouts by midnight [Monday],” Ramos Reyes, leader of the CETEG teachers’ union, told AFP. 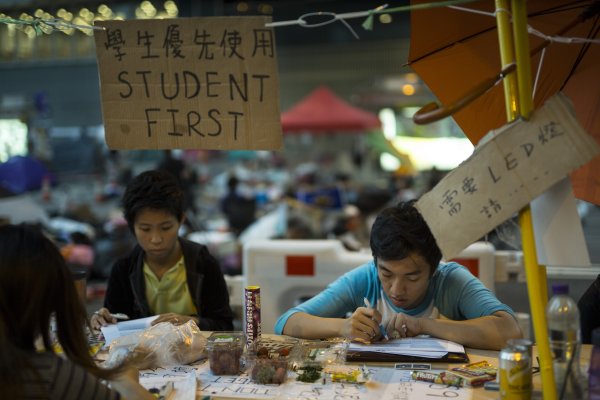 Student Protesters Prepare for Midterms and for Harder Questions
Next Up: Editor's Pick