Dancing With the Stars Watch: The Switch-Up

Welcome back to Dancing With the Stars, where each week the stars cinch up their spandex and hoof it on the dance floor in the hopes of currying America’s favor and a shot at a Mirror Ball Trophy. This week we are being treated to the Switch-Up. No, the dancing reality show has not been preempted by either the Jason Bateman movie, The Switch, nor the Jason Bateman movie, The Change-Up, nor Teen Wolf Too nor, sadly, anything to do with Jason Bateman whatsoever. Instead, all the spray-tanned and hair-sprayed stars switch partners, and it’s supposed to kick up the drama, but in reality just kicks up the dramatics.

Antonio Sabato Jr. and Allison Holker: The professional hunk teamed up with the new pro for a Bollywood routine, which is sort of unfair because the judges never know what to do with Bollywood numbers and always judge them harshly. Antonio delivered the goods, but he’s no Akshay Kumar, if you know what I mean. 28/40, with guest judge Jessie J lowballing with a 6. (Tom Bergeron helpfully suggested having someone else start her car for her as a safety precaution.)

Bethany Mota and Mark Ballas: One of TIME’s most influential teens admitted that she does not know what “swag” is, but promised to try and bring it to her hip-hop routine. The duo busted some moves to Usher’s “She Came to Give It to You,” and Bruno Tonioli thought she did a fantastic job and is “blossoming with confidence,” which is something only Bruno can say. Jessie J thought she “attacked it,” and Julianne Hough took the opportunity to diss her brother. 32/40, which Mark considered an unfairly poor score.

Jonathan Bennett and Peta Murgatroyd: Jonathan was still reeling from his low scores last week, but was ready to rumble with Peta with a fierce … jitterbug. They performed a fast-paced 1950s-inspired routine that was filled with lifts and kicks, but after Jonathan almost dropped Peta on her head, they lost a little luster. Carrie Ann Inaba thought there were moments of brilliance, but many parts were off. Jessie J and Julianne competed for harshest critique with Jessie J just eking out a win. Jonathan was shocked, but should not have been what with the whole almost dropping Peta thing. 24/30.

Alfonso Ribeiro and Cheryl Burke: Expectations were riding high for Alfonso after he got a perfect score last week for his Carlton. This week, he didn’t get to do a dance he originated, but a traditional flamenco. Cheryl choreographed a “fully professional” routine for him, which he was able to pull off. Julianne said it was the first partnership she believed in tonight. It was so good Jessie J “turned American.” 34/40.

Janel Parrish and Artem Chigvintsev: Janel and Artem set out to make their partners Lea and Val jealous, and luckily they were assigned a burlesque routine, which helped them meet their goal. Janel wore sparkly bustier and underpants, while Artem went for the suspenders and no shirt look for their sultry routine set to a Jessie J song (awkward). Val hammed it up on the sidelines and Janel apologized to her dad for the overly sexy routine. Julianne thought it was not “authentic” burlesque, whatever that is, but Bruno dismissed her criticism, because there’s no such thing as “too sexy.” Jessie J thought it was all hilarious, because she wrote that song about her mom (more awkward!). 33/40.

Michael Waltrip and Witney Carson: The producers let Michael’s inner dad out, by assigning him a disco routine with the youngest pro on staff for the ultimate Dad-portunity. The routine was a silly trifle, but the judges were really harsh in their critique. Julianne announced that it was getting awkward to watch him continue in the competition. By the time he made it off the dance floor, Michael looked upset, but then he made a Drake reference proving that even when he is down he is still the ultimate dad. 20/40, which clearly broke Michael’s heart.

Tommy Chong and Emma Slater: After getting some tips from Peta for how to navigate Tommy’s “memory issues,” Emma choreographed a mambo to Musical Youth’s “Pass the Dutchie” while clad in a Rasta-colored bikini. As much as the producers cast Michael as Ultimate Dad, Tommy gets the full stoner treatment. Jessie J liked the routine, but Julianne thought he looked “tired” and thought he was “running out of material.” 23/40.

Sadie Robertson and Derek Hough: After spending a week on the Robertson family farm, Derek and Sadie had plenty of time to perfect their Charleston. The chaste routine was one of the first dance of the night to garner almost universally positive remarks. 36/40, which is the highest score of the night.

Lea Thompson and Val Chmerkovskiy: Lea wisely reminded Val that she’s “not Janel” before they got ready for their “Broadway” routine. (Is “Broadway” really a dance style?) For the performance, Lea dressed as a nurse and Val was inexplicably dressed as an old man with a walker. While not completely clear, it appeared that Lea was a naughty nurse hitting on her patients at a nursing home. Tom dubbed it “Mama’s Family the Musical,” while Bruno made a Cocoon reference. Julianne thought Lea felt “a little unsure,” but that it was generally a fun routine. Carrie Ann called it “wackadoodle” and Bruno thought it was a treat. Val finally explained that it was the home for retired ballroom dancers with “a little bit of swag,” which almost made sense. 34/40.

The Leaderboard: Alfonso Ribeiro is in the lead with 74 points, followed by Sadie Robertson and Lea Thompson with 73 points each. At the bottom are Jonathan Bennett with 48 and Michael Waltrip with 45.

Best Reason to Come Back Next Week: Pitbull will be on the show to bust a move while screaming, “Dale!”

Worst Reason to Come Back Next Week: Pitbull will be on the show to bust a move while screaming, “Dale!” 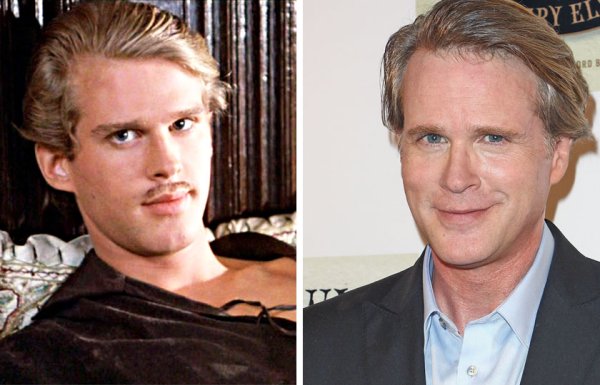 The Cast of The Princess Bride: Where Are They Now?
Next Up: Editor's Pick