Blowing the Whistle on the End of Iowa State–UNC

Kennedy Meeks of the North Carolina Tar Heels, center, reacts as DeAndre Kane of the Iowa State Cyclones falls underneath the basket at the AT&T Center in San Antonio on March 23, 2014
Ronald Martinez—Getty Images
By Jack Dickey

There was a lot to like from Sunday’s NCAA-tournament slate, with Stanford’s upset of Kansas leading into the nail-biter between Wichita State’s undefeated veterans and Kentucky’s heretofore underwhelming upstarts. Third on the docket was Iowa State against North Carolina, with young Fred Hoiberg and his surprisingly successful Cyclones favored to beat the esteemed Roy Williams and his erratic Tar Heels squad to land in the Sweet 16. That game didn’t disappoint, either, until it did, with an ending that ought to go down as an officiating debacle and a blow against instant replay’s credibility.

The two teams nipped at each other throughout, with North Carolina falling behind early and Iowa State down as much as eight points late. With a little more than two seconds left on the clock and the score tied, Iowa State’s DeAndre Kane, taking on two powder blue defenders, hoisted a shot off the glass. The ball fell through the hoop for the final two of his 24 points, and the Cyclones had the lead, 85 to 83. The clock temporarily froze — as it does after any made basket in the last minute of the second half — at 1.6 seconds remaining.

North Carolina’s Jackson Simmons grabbed the bouncing ball and heaved it to Nate Britt, who sprinted down the court, past the centerline and called timeout, as Williams had requested from the sidelines. The clock, once Britt had grabbed the referee’s attention and earned his whistle, showed 0.3 seconds left.

After the whistle, the officials went to the monitor to check the situation out. Had there indeed been 0.3 seconds left on the clock? Could there have been more? Or maybe even less? After a protracted huddle, they emerged with a wretched decision, which should make sense only to those who watch the games with their own stopwatches and reject the decisions of the oh-so-fallible in-arena timers. The game, the officials told both coaches, was over.

Their reasoning, as deduced by CBS’s Steve Kerr, was that the clock had started far too long after Britt received the inbounds pass. And it had: Deadspin’s Tim Burke counted that 1.73 seconds elapsed between Britt’s touch and the referee’s whistle, which means the timer’s trigger finger was about four-tenths slow, at best. Kerr said the refs made the right decision.

Perhaps they had — in a world where the clocks on the court should be expected to signal precisely nothing to players, where the numbers on the clock at which Britt stared were in fact indecipherable hieroglyphs. But no: they were numbers, meant to tell the players playing in the game how much time was left in it.

This is not to blame the particular officials working on Sunday evening in San Antonio; they followed their sport’s code to the letter. This is only to ask in what possible way a technology purportedly implemented to increase precision can get away with an unprovable assertion in response to an in-fact unanswerable question.

Would Britt have called time-out had the clock started on time? There’s no way of knowing. Under instant replay’s presumptuous pedantry, there can be only guesswork. 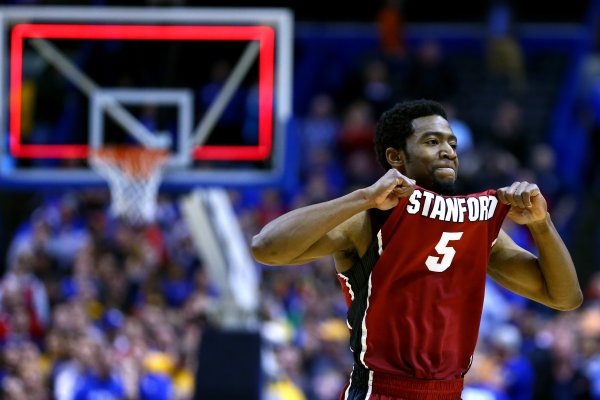