A trader works on the floor of the New York Stock Exchange during afternoon trading on Oct. 9, 2014 in New York City.
Andrew Burton—Getty Images
By Fortune / Tom Huddleston, Jr.

Stocks closed Friday with a sharp sell-off, capping what has been a highly volatile week for U.S. markets.

The Dow Jones industrial average finished the day down over 115 points, turning negative for 2014. The decline comes one day after the blue-chip Dow index plummeted 335 points in its worst day of trading since June 2013. Concerns over global economic growth once again wreaked havoc on the marketplace on Thursday, completely erasing the strong gains experienced a day earlier when investors’ spirits were buoyed by the release of Federal Reserve meeting minutes suggesting the Fed is in no hurry to raise interest rates.

The S&P 500 and Nasdaq also got crushed on Thursday, with each index losing about 2%, respectively. The S&P 500 is down 1% on Friday, while the Nasdaq has fallen 2% as the tech-heavy index was hit hard by poor performances for a number of semiconductor companies. NXP Semiconductors and Avago Technologies were the index’s biggest losers for the Nasdaq on Friday afternoon as a poor quarterly report from Microchip Technology triggered an industry-wide sell-off of chip-related companies.

It has certainly been an up-and-down week at the marketplace. Here are some numbers to put the market turbulence in perspective:

– With drop on Friday, the Dow Jones has now lost some 650 points, or a whopping 4%, in the past three weeks.

– In fact, the past three weeks have erased a massive amount of value from the U.S. economy, with Bloomberg noting that U.S. equities have lost more than $1 trillion in value over that period.

– After dropping four out of five days this week, the Nasdaq is on pace to finish down some 5% over the past five days, which would be its worst week since 2012.

– OK, one more on the Dow Jones, which moved by at least 200 points in either direction for the fifth time in seven days on Thursday.

– Energy stocks were some of the hardest hit on Thursday as oil prices dropped sharply, resulting in Exxon Mobil and Chevron each falling about 3%, while the S&P 500’s energy sector was down more than 3.5%.

The market’s volatility in recent weeks has been reflected in the Chicago Board Options Exchange Volatility Index (VIX), often referred to as the “fear index,” which spiked 23% yesterday to hit 19. The VIX is up again on Friday, by 3.6%, and the index is up 41% on the year. Of course,Fortune’s Stephen Gandel noted yesterday that wild VIX fluctuations are not exactly the end of the world for the markets and that traders expect the VIX to be lower in a few months. 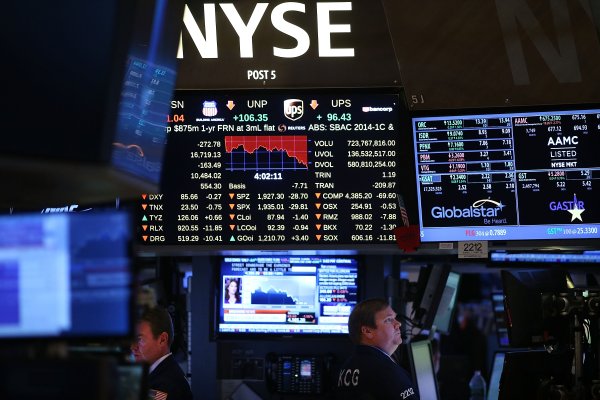