The Recent Loss of My Cat Led Me To Explore the Weird, Wild World of Pet Memorials

For some reason, when I took this photo, I had a creeping feeling that it was special. It turned out to be the last photo I ever took of my dear friend, and cat, Darwin.

That day, he took off on a walkabout, as he generally does. The cabin we live in is right up against a big nature preserve, and it’s not unusual for him to be gone for four or five days at a time. About the time I get worried, he waltzes in nonchalantly, and promptly voms up some mouse bits for me.

But this time was different. I started checking the DOA (dead on arrival) report. I walked around at night calling for him. It had gotten cold fast, and I was obviously worried about my boy being out in the elements. Then late one night, 5 days later, he was at the door, but he looked different — haggard, sunken and awful. I swept him up, and it was immediately apparent something serious was wrong. He was a bag of bones.

He checked into the vet first thing in the morning, and was given a good prognosis, with clean bloodwork. The phone call I was expecting was that I should come and pick up a weakened Darwin; I imagined tucking him into a basket and feeding him broth with a dropper. The call I got was from a grave and sorry sounding vet: Darwin didn’t make it through the night. I’ll never really know what happened to him.

After 10 years of knowing a cat, dealing with their death is hard; I skipped to the bargaining stage of grief immediately. If only I hadn’t threatened him with the squirt bottle when he ate butter on the counter, or kicked him out of the bed when he insisted sleeping on top of my face at night. I would trade all the butter in the world to have him back, even put up with him nibbling on my face while I sleep, I promise! I even thought about burying him at the severely horrific pet cemetery near my parents’ house just in case.

Upon paying the $600 vet bill, I was given a plastic bag with my dead, frozen cat in it, thoughtfully wrapped in a blanket. “Don’t worry about returning it, we have plenty,” the vet tech said, handing him over.

I couldn’t really justify the $150 cremation, so naturally, I drove around town with my dead cat in my car for the day, deciding what I should do. It was weirdly comforting, having him there, instead of seeing him taken away in the arms of the vet, thinking he’d be okay, and never seeing him again.

I wanted to memorialize him somehow; I’ve spent a lot of nights trying to find the bottom of the Internet, and I’ve come across a lot of weird shit that people do to their pets’ remains. From having their ashes pressed into diamonds or records to having them wrapped as mummies, I’d be lying if I didn’t consider a few.

The folks over at Perpetual Pet can freeze-dry your beloved pet in a familiar pose. Pretty much the ultimate for people who can’t let go, I love the idea of explaining the dead cat lounging on top of the bookshelf to unsuspecting strangers. For the surprisingly low price of $700, I could have my cat’s dead body chilling in my house forever. What I don’t relish is the thought of possible insect infestation or cleaning him. I feel like a quick once-over with a vacuum would be sufficient, but do I really want to be the person that has to vacuum her dead cat? People already think I’m a witch.

People say a lot of things; they also say that no two animal noses are alike, which seems believable enough. Enough to get custom nose-print jewelry? Rock My World Inc on Etsy offers just that—for about $200 you send in an impression of your pet’s snout, and they send you a silver pendant of it. I loved Darwin’s pointy little weasel nose, but disembodied, I don’t think it would be very cute. What does one pair this Dead Pet Nose Necklace with?

The highest echelon of Cat Ladyness has to be knitting things with your dead cat’s fur. When I was a kid, as a way of coping with insomnia, I felted a little ball of cat yarn; when one of my sisters found it stashed in a doorframe, she of course didn’t understand my art.

Using dog fur for knits has been pretty popular in Alaska for awhile—sheep don’t do great up here, and anyone with sled dogs at home runneth over with soft, fluffy fur. It’s common to find dog-fur knits at local farmer’s markets, and lots of people have bags of dog fur stashed away to spin. But if you aren’t a skilled spinner, you can have your pets hair spun for a mere $8-15 an ounce. Chiengora Fibers will even knit up a cozy hat or pair of cozy mittens for you. I loved this idea — Darwin had such amazing fur, a knitted muffler would even smell like him! Then I learned the disgusting way that it’s rather difficult to shear a dead cat.

I love teeth; they are beautiful and personal tokens, and can be worked into wearable jewelry fairly easily. Etsy store Bonetrail offers precious and affordable teeth and bone jewelry; it has a creepy Victorian look, and they offer custom pieces as well. The flower ring especially caught my eye—it’s both macabre and pretty, and unless you were really looking, you wouldn’t really even see the animal part. The only problem? Harvesting a tooth from a dead animal is a bit of an undertaking, to say the least. I went as far as bringing pliers with me, lost my nerve almost immediately after unwrapping Darwin. He did look peaceful — how could I jack open his face and yank out a tooth?

In the end, I found a nice spot on our property, and dug a hole. My dog sat with me and watched, seemingly wise to the situation. I wrapped Darwin in the gross green towel he loved to nap on, said some weird things about what a good cat he was, and carved his name and dates into the aspen tree next to the grave. I sprinkled some iris seeds too, just for good measure. It felt good, being in control, and being able to say goodbye. I thought I’d be traumatized to see his corpse, but really, it helped make it seem more real and natural. This is okay. This is death.

When I’m struck with pangs of grief, I usually turn to The Good Book — and I do mean J.R.R. Tolkien’s “Lord of the Rings.” Gandalf has some really good things to say about hard times and death. Also baby animal pictures. Those help too.

How will you remember your pet once they’ve been sent to the afterlife? Are we insane to put so much time and effort into pets? I’m happy that I have so many photos of Darwin, but I’m still eyeing that tooth and flower ring — maybe I can just pretend it has my cat’s tooth in it. 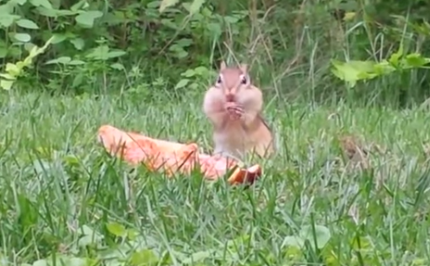 Watch a Tiny Chipmunk Try Really Hard to Finish a Slice of Pizza
Next Up: Editor's Pick