Pressure is building on Hong Kong’s embattled top leader over a scandal involving undisclosed payments from an Australian engineering firm, with prosecutors in both Hong Kong and Australia investigating the matter and the democratic bloc in the Hong Kong legislature preparing impeachment proceedings.

The concurrent investigations are a fresh challenge to the rule of Chief Executive Leung Chun-ying, locally known as “C.Y.” He is already facing thousands of pro-democracy protesters who refuse to leave the streets until Beijing backs down from a plan to vet candidates in future Chief Executive elections.

“The timing is not good for C.Y. Leung,” says Michael Davis, a law professor at Hong Kong University. “This is of course a political headache.”

The investigations follow a report published by Fairfax Media in Australia on Wednesday, which stated that the Hong Kong leader accepted $6.4 million in payments from engineering firm UGL. Leung, who took office in March 2012, closed a deal with UGL before standing for Chief Executive, but did not disclose the payments to be made under that deal when taking the post, Fairfax reported.

John Garnaut, the Australian journalist who co-wrote the report, told the South China Morning Post that he received documents revealing the deal on Oct. 5 from an anonymous source.

On Thursday, Hong Kong’s Justice Department gave the prosecutors’ office in Hong Kong the authority to investigate the matter for any illegalities. As well as announcing plans to bring impeachment proceedings against him, democratic members of the Legislative Council have asked the Independent Commission Against Corruption (ICAC) to investigate the Beijing-backed leader.

Either of the two investigations could spell disaster for Leung, says Surya Deva, a professor at the City University of Hong Kong and a specialist in Asian corporate law.

“If there is any adverse finding in one of the cases, it will affect the other,” says Deva.

“If you’re doing something illegal or unlawful, you’re not doing it alone,” he says, referring to UGL and Leung.

The scandal involves two bundles of payments Leung reportedly received in 2012 and 2013, as part of the sale of property-services firm DTZ to UGL. At the time of the sale, Leung was Asia-Pacific director for DTZ. He resigned from that post on Nov. 24, 2011, three days before he announced his Chief Executive bid. He went on to win Hong Kong’s highest post in March 2012.

UGL and Leung have both said they were under no obligation to disclose the payments, since the deal was signed before Leung took office.

Deva said it’s not clear if Leung’s decision not to reveal the payments to the public upon taking office broke Hong Kong laws. But Leung’s silence on the deal was, at best, unethical—perhaps unethical enough to fell Leung’s political career, he says.

“Legally, he may be in the clear, but ethically, he is in the wrong,” he says.

At issue are stipulations in the contract obliging Leung to act for UGL “as a referee and adviser from time to time”—an obligation that extended into his eventual taking of Hong Kong’s helm. Leung put a handwritten note into the contract that he would do so “provided that it does not create any conflict of interest.”

Davis adds that the fresh scandal—coupled with the ongoing Occupy Central demonstrations that show little sign of letting up—might persuade Beijing to lean on Leung to resign, especially if the stalemate between the protesters and the Hong Kong government endures. Indeed, optimism for any breakthrough in the ongoing standoff dulled on Thursday night, when Chief Secretary Carrie Lam abruptly cancelled talks with student protest leaders and students pledged to up the ante with a rally on Friday night.

“The Chinese government’s policy on corruption is, of course, selective,” says Davis. “But if [Leung] continues to mismanage the Occupy Central crisis, and now with this scandal, he may become too much of a liability.”

Leung was the Chinese government’s second choice for Hong Kong’s top leader in 2012. A pro-Beijing electoral committee of 1,200 members had originally favored Hong Kong tycoon Henry Tang for the job, but an admission of adultery, plus the discovery of a lavish, illegally built basement at Tang’s home, tanked his prospects. In the end, a slim majority of just 689 voters secured Leung the job—a feeble tally that has prompted the pro-democracy camp to give him the derisory nickname of “Six Eight Nine.”

Even so, Beijing has appeared to put its full weight behind the beleaguered leader during the protests, flatly refusing demonstrators’ demands that Leung resign.

Davis, the law professor, says a forthcoming resignation seems unlikely, at least not until the investigations conclude, and only if the probe returns findings of illegalities. ICAC investigations are notorious for their length—an inquiry into allegations that former Chief Executive Donald Tsang accepted favors from business tycoons has been dragging on since Feb. 2012.

“This may weigh on him in the long-term,” says Davis, “but I don’t think we’re anywhere near that yet.” 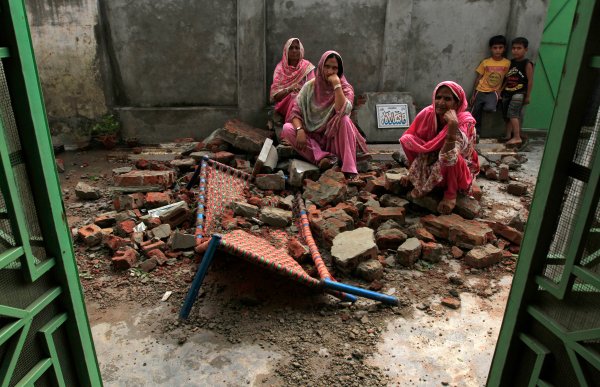 India, Pakistan In Prolonged Border Conflict
Next Up: Editor's Pick