The Perils of Nanny Cams and Kid Trackers

I’m acutely aware of how much time I spend fretting about my kids. I’m an admittedly nervous mother – all hell breaks loose in my house if someone dares to give my toddler a whole grape or a hot dog that hasn’t been halved down the middle. Stories about choking or children who go to bed and never wake up haunt me. I sometimes wonder if all parents watch for the rise and fall of their child’s chest when they peek in on them at night. I also wonder if that is something I will ever stop doing.

If we didn’t raise our first child in a tiny apartment in Brooklyn where we were forced to share a bedroom, I probably would have invested in one of those video monitors that have become so popular among parents like me – the ones who worry. I always assumed that’s who those monitors were for, but a New York Times Motherlode blog post opened my eyes to another type of parent who likes to use them–the observer. In the piece, Thanks to Video Monitors, Parents are the New Big Brother, several admitted to holding on to infant video monitors once their children were well into toddlerhood, because they enjoy peeking into their kids’ world:

I never really thought about the concept of toddlers and privacy, but if I stop and examine how I feel about it, is it ridiculous to say that I believe they should be afforded some? I think all parents love to peek in on their sleeping children or sneak up and look in unnoticed when their child is lost in play. I certainly understand why parents would be drawn to making a habit of it by ogling a video monitor nightly. But there are things I remember about my childhood – and a lot of my best memories were solitary ones.

I was a private child. I loved playing alone. I see my almost-4-year-old doing the same thing I did as a child—getting lost in play in his room for hours. Would he act the same if he knew I was watching? I don’t think so. I happen to know he is not too young to crave privacy; for one, he’s very adamant about having the door closed when he uses the bathroom. Sometimes when I walk into his room when he’s playing he tells me to “Leave, Mommy.” One child in the New York Times article admits to knowing when she is being watched; her mother hushes her through the monitor when she and her brother play too loudly. “On a recent Saturday morning, Abby pointed out the camera in her room. ‘It’s used for Mommy and Daddy, so if I bang, they are going to talk through the camera,’ she said.”

We’re observing our children more than ever before. We may be raising children to believe – from a very early age – that they’re not entitled to their own space and privacy. As they grow, we hammer this idea into their heads a little more, through a device most of them beg for: the cell phone. Everyone’s favorite accessory isn’t necessarily surveillance, but it is performing the same function—enabling parents to track and observe that their children are okay, without the need for blind trust.

Recently, New York City Mayor Bill DeBlasio vowed to end the cell phone ban in schools to a collective sigh of relief from parents everywhere. He admitted that his own son violates the ban and called it a “safety issue” for parents to be able to keep track of their kids. Raising children in the city is potentially worrisome, but is having a direct line to your child at all times really a safety issue? When I was growing up and a parent had to reach a child in an emergency, they called the school. Perhaps we have more emergencies now, or are we just so used to being on top of our children that we truly believe they can’t make it to school and back without being able to reach us, immediately?

In our attempts to protect our children, we may be crippling them instead. Learning how to move through the world without a direct line to your parents is an important skill for older children. We’re demanding our kids be reachable at all times for their own good. Or is it for our own good? “On the one hand, being able to reach our children at all times gives parents a sense of security and it gives kids a sense of security,” says Eileen Kennedy-Moore, a Princeton, New Jersey psychologist and professor for the new video series, Raising Emotionally and Socially Healthy Kids. “But I think also that it can be an easy out – to immediately call a parent if they struggle. If we leap in too quickly to solve problems that our kids can figure out on their own, we steal their opportunity to develop important coping skills.” What’s more we let them think they need our help. “Of course we want to take reasonable steps for safety,” says Kennedy-Moore, “but we also want to give our children the message that ‘I have faith in you. I believe that you can handle this.’ That’s a very empowering message.”

In addition to putting kids in a position to constantly outsource problem-solving to their parents, cell phones are effectively putting our children on call – all day long. Imagine forfeiting the freedom you had as a child, to leave the house and be absolutely free of your parents until you returned. One mother who grew tired of having her calls seemingly ignored, even went as far as creating an app that will shut down your child’s phone if he doesn’t answer it. Does that sound like someone who is worried about safety, or control? I’d say the latter.

Tonya Rooney, an Early Childhood Education lecturer at Australian Catholic University, has done a lot of research on the repercussions surveillance has on children. In her research article, Trusting children: How do surveillance technologies alter a child’s experience of trust, risk and responsibility, she concludes:

I stomped through Europe in my early twenties without a cell phone and with only a promise to call my mother once a week. If I observe my child secretly in the days of his young life and hand him a cell phone to track him as soon as he’s old enough to leave the house on his own, am I setting him up for the same independence I enjoyed? Will he be able to handle it? It’s a trajectory that we have the power to stop if we realize it may not be in the best interest of our children to raise them to think it’s okay to be watched and tracked.

But, our kids will probably never know the freedom we did, so they won’t know what they’re missing. 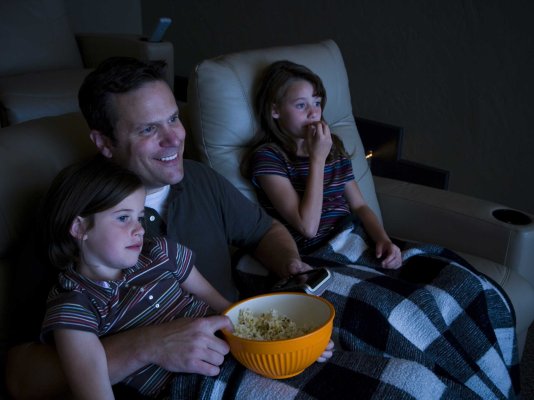 How Letting Your Kids Stay Up Late Could Wreck Your Life
Next Up: Editor's Pick