In some years, and this year was no exception, there is no obvious choice for the Nobel Peace Prize. Speculators can guess, pundits can argue, but ultimately the Norwegian committee’s decision — if there is one — comes as a surprise to many.

In 1935, however, the choice seemed obvious. The plight of Carl von Ossietzky, a journalist and socialist activist held in a Nazi concentration camp, had drawn international attention. After serving during the First World War, von Ossietzky became a staunch pacifist and decried German rearmament, facing persecution under successive German governments but refusing to flee despite the threat to his safety. He had been put in a Nazi camp in 1933.

Albert Einstein and French author Romain Rolland were among the period’s celebrity activists who supported Ossietzky’s nomination for the peace prize. Wrote TIME that year:

But the Third Reich was anything but pleased that one of its prisoners might receive the high profile award. The Germans pressured the committee against choosing him, with one Nazi state newspaper warning the Committee “not to provoke the German people by rewarding this traitor to our nation. We hope that the Norwegian Government is sufficiently familiar with the ways of the world to prevent what would be a slap in the face of the German people.” Under this Nazi pushback, the Committee announced it would not award anyone the prize that year–citing violence in Africa and political instability in Asia. “The time seems inappropriate for such a peace gesture,” the Committee said in a statement.

The Committee would redeem itself a year later, retroactively awarding von Ossietzky the 1935 prize, worth $40,000. The move infuriated Hitler. German media called von Ossietzky a “traitor” and the award an “insult” to Germany. The Führer threatened to cut off relations with Norway, even after the Foreign Minister resigned from the Committee over the decision, and declared that Germans would never again be allowed to receive Nobel Prizes. (Several German scientists who were subsequently awarded Nobel Prizes were unable to accept the award until after World War II.)

But by the time the award was announced, von Ossietzky’s health had worsened. The Germans had already moved him from the prison camp to a hospital in Berlin, perhaps aware of the impending international attention that would soon befall him. When they unexpectedly allowed journalists to meet with him, he was “looking thin and sounding tired,” TIME wrote after an interview with him:

Von Ossietzky was never allowed to accept his prize in Norway, and his tortuous saga continued. Though he was eventually released from prison supervision, it was widely assumed that the release was on the condition that he refrain from activism. In an eerie TIME interview in 1937, von Ossietzky praised the Nazi government and announced that he had been allowed to accept the prize money. But the TIME article also made clear that von Ossietzky’s words were not entirely freely spoken. “Hollow-eyed and pale, Ossietzky knew that if he got himself imprisoned again, it would be his death,” the article noted.

Still, the sickly Nobel Laureate’s troubles continued. A swindler claiming to be a lawyer proposed to collect von Ossietzky’s prize money for him, only to launder the funds and keep them for himself. Almost all of the money was recovered by May of 1938 when von Ossietzky died at 48 of, according to the official death record, meningitis — but by then he was, as TIME wrote, a “long-ailing, wornout, beaten Nobelman.”

Read the 1935 story about the Nobel Peace Prize Committee passing over von Ossietzky: Way of the World 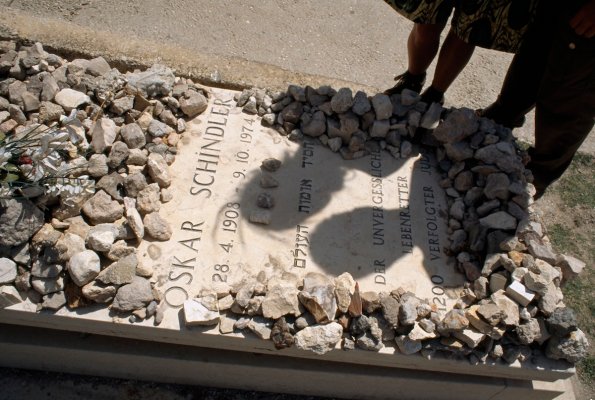 There's a Nazi Buried on Mount Zion in Israel — For a Good Reason
Next Up: Editor's Pick