How the Brighton Bombing 30 Years Ago Portended Peace

In the early hours of Oct. 12 1984, a bomb packed with 20lb of gelignite gouged a ragged O of surprise—or outrage—in the frontage of Brighton’s Grand Hotel. The intended target, then Prime Minister Margaret Thatcher, escaped the blast, but not everyone proved so fortunate. Most guests had come to the English seaside town for the annual convention of Thatcher’s U.K. Conservative Party; five died and 31 were injured, including Norman Tebbit, Secretary of State for Trade and Industry, and his wife Margaret, a nurse, left permanently paralyzed.

Later the same day, the Prime Minister gave her keynote speech to delegates as planned. But it was not the speech she had planned. The attack, Thatcher said, “was an attempt not only to disrupt and terminate our Conference; it was an attempt to cripple Her Majesty’s democratically-elected Government. That is the scale of the outrage in which we have all shared, and the fact that we are gathered here now—shocked, but composed and determined—is a sign not only that this attack has failed, but that all attempts to destroy democracy by terrorism will fail.”

From the distance of three decades, the Iron Lady turns out, as so often, to have been both right and wrong. The group responsible for the attack, the Provisional IRA, has disarmed and disbanded. The bomber, Patrick Magee, jailed for life in 1986, regained his freedom fourteen years later as part of the Northern Ireland peace process his murderous act disrupted, but failed to derail.

That same process has quelled, but not completely extinguished, Irish republican terrorism. Magee has become an advocate for reconciliation and is scheduled to appear at an event in Brighton to mark the 30th anniversary of the bombing. Tebbit feels less conciliatory. Invited in 2007 to participate in a radio reunion of figures involved in the events of that day, including Magee, he replied: “The only reunion I’d be happy to attend was the one where Magee was reunited with a bomb.”

Just as hard for old adversaries to stomach has been the rehabilitation—and rise—of Sinn Féin, the party that once acted as the political wing of the Provisional IRA. In 2007, Sinn Féin won the second largest number of seats in the Northern Irish Assembly, installing Martin McGuinness, a former member of the Provisional IRA, as Northern Ireland’s Deputy First Minister. The party’s popularity south of the border, in the Republic of Ireland, is also surging. An Oct. 9 poll puts it at level pegging with the governing and hitherto most popular party, Fine Gael. The ranks of Irish republicans have not been vanquished but empowered.

Britain, meanwhile, is grappling with a new wave of terror that continues to build, from adversaries who appear implacable. Defenders of civil liberty worry that measures to counter the threat from militant Islam risk damaging the democracy they are designed to protect. Such an outcome would ignore the hard lessons of Brighton and its aftermath. The remodeling of republicanism as an electoral force may not be the triumph Thatcher envisaged as she stood at the podium hours after the bomb blast, outwardly calm, her helmet of hair immaculate. Nevertheless democracy has prevailed, as she said it would. 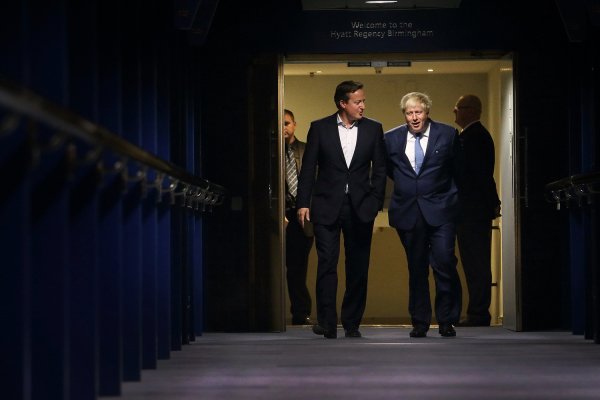 U.K. Edges Toward Departure From E.U.
Next Up: Editor's Pick