Let There Be Light

Sisters Sonia, right, and Anita Singh, who are both blind, let rain fall on their faces as their parents work nearby
Brent Stirton—Reportage by Getty Images
By Bryan Walsh

Anita and Sonia Singh were born into darkness. Like millions of people around the world, the two girls came into the world with congenital cataracts, robbing them of all but the faintest awareness of light and dark. In a congenital cataract, the lens of the eye is clouded from the moment of birth, leaving the pupil a milky white or gray. A person with the condition—if left untreated—will be blind for life.

India, where Anita, 5, and Sonia, 12, were born, is home to an estimated 12 million of the 39 million blind people in the world. The good news about congenital cataracts is that the condition is curable with a simple surgical operation, one that takes as little as 15 minutes, provided the work is done when the patient is young enough for the brain to recalibrate to the light. In India, such an operation might cost $300—at least several months’ salary for an average rural worker. For those like Anita and Sonia, who live in a small village in rural West Bengal, that means the real cause of their blindness is poverty. For their families, the effort of caring for the two girls—who can never be left alone and can’t go to school—makes escaping the grinding cycle of poverty all but impossible.

But an organization called WonderWork is trying to change that. The New York City–based NGO works with local surgeons in developing countries, providing training and funding that enables the doctors to perform basic surgeries—including cataract removal—that can make an incredible difference to an individual and life. WonderWork brought Anita and Sonia to a team of doctors based at the Vivekananda Mission Hospital in West Bengal who were able to treat their cataracts before the girls were condemned to a life of permanent blindness. At a cost of just a few hundred dollars, they were given the gift of sight.

For a project called First Sight, the photographer Brent Stirton followed Anita and Sonia from their small village to the operating table and back. He captures the limitations and small joys of a life lived in darkness, as when Anita and Sonia feel the rain fall on a rice field while their parents labor in the paddies. He accompanies them as they leave their village for the first time in their lives, arms wrapped around each other on the seat of a bus, on the way to a life-changing operation. And he’s there, after the surgery, when the bandages around their eyes are unwrapped and the two girls see for the first time in their lives, and the darkness is lifted.

The problems of extreme poverty can seem overwhelming, leaving our hearts frozen by the sheer scale of human suffering. But the efforts of groups like WonderWork show that it takes only a few hundred dollars to make a life-changing difference. After a few months of rehabilitation, Anita and Sonia should see perfectly. And Stirton and his camera were there to witness the dawning of that light. 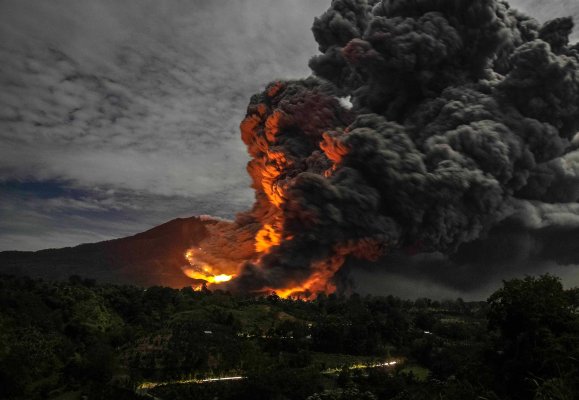 See a Volcano Erupt in Indonesia
Next Up: Editor's Pick