The Rock and Roll Hall of Fame has announced its 15 nominees for the class of 2015 and, as usual, it’s a Whitman’s Sampler of genres — industrial avant garde artists Nine Inch Nails, pop-punk pioneers Green Day, Brit rock royalty The Smiths and “Lean On Me” singer Bill Withers are some of the first time nominees for the Class of 2015. They are joined by some long-time contenders, including Chic, who have been up for consideration nine times, and 1960s blues-rock legends Paul Butterfield Band who have now been nominated three times.

The 2015 induction ceremony will be held in April in Cleveland, home of the Rock and Roll Hall of Fame and Museum.

In order to be eligible for induction, artists must have released their first single or album 25 years ago (no later than 1989). Once again, fans will have a voice in the voting — the top five artists selected by the public will be included on a “fans’ ballot” that will be tallied with other votes from those who make up the Rock Hall’s voting body. Fans can cast their vote at the Rock and Roll Hall of Fame’s website, or via Rolling Stone or USA Today.

Here are the nominees:

Bio: This is the first time that the short-lived British band with the long-lasting legacy and ardent fan base has been nominated for the Rock Hall. The band — vocalist Morrissey, guitarist Johnny Marr, bassist Andy Rourke and drummer Mike Joyce — formed in Manchester in 1982 and broke up in 1987 after releasing four incredibly influential albums. The Smiths were largely responsible for the birth of Brit pop in the ’90s.

Bio: American disco outfit Chic has been nominated for the Rock Hall nine times since 2003, but perhaps 2014 will be their lucky number, thanks to the work of Nile Rodgers with Daft Punk. The band, which was founded by guitarist Rodgers and bassist Bernard Edwards, rose to fame in the disco era thanks to a string of glitzy hits. Their funky disco tunes influenced artists across genres, including Sugarhill Gang, Duran Duran, Blondie and Queen.

Bio: The California punk revivalists went mainstream with their 1994 major label debut Dookie, which helped usher in a wave of pop-punk acts hoping to replicate Green Day’s phenomenal success, which includes sales of over 75 million records around the world and winning 5 Grammy Awards. The band released three albums in 2012 — Uno!, Dos!, and Tres! —but have not yet announced a new album. This is the first year they were nominated for the Rock and Roll Hall of Fame.

Bio: Joan Jett has been eligible for the Rock Hall for years — and should have been inducted ages ago — but this year’s nomination started gaining traction after she joined Nirvana on stage last year. Krist Novoselic introduced her by pointing out that it was surprising that she had not been inducted in her own right. During her ferocious performance of “Smells Like Teen Spirit,” the Twitterverse was buzzing about the same fact — and it appears that the world was listening. This one is long overdue.

Essential Tracks: “Bad Reputation,” “I Hate Myself for Loving You,” “I Love Rock and Roll”

Bio: The pioneering German electronic music band was founded by Ralf Hütter and Florian Schneider in 1970 in Düsseldorf. The notoriously reclusive act’s revolutionary sounds and technologies inspired a generation of artists across genres. David Bowie, Bjork, Blondie, New Order and U2 have all called themselves fans of Kraftwerk, while acts like Prodigy and Daft Punk were influenced by the band.The band received a Lifetime Achievement Award from the Grammys last year.

Bio: Withers had a string of hits in the 1970s and 1980s, including “Ain’t No Sunshine,” ”Just the Two of Us” and “Lovely Day,” but hasn’t released new music in nearly three decades. He won a Grammy Award in 1972 for Best R&B Song for “Ain’t No Sunshine,” a track that still gets regular radio play and enjoys a second life as fodder for vocalists on singing reality shows. The last album he released was 1985’s Watching You Watching Me, but this is the first time he has been nominated for the Rock and Roll Hall of Fame.

Essential Tracks:“Ain’t No Sunshine,” “Just the Two of Us,” “Lean On Me”

Bio: When Motown Records was starting out they had two major successes — the Smokey Robinson-fronted group, The Miracles, and The Marvellettes, the label’s first girl group. The band shot to superstardom straight out of the gate with their hit “Please Mr. Postman,” which went to number one on the Billboard charts. The band was first eligible for induction into the Rock Hall in 1987, but weren’t nominated until 2012. Their importance, legacy and influence have been overlooked so far — hopefully that will be rectified this year.

Essential Tracks: “Please Mr. Postman,” “Don’t Mess With Bill,” “Too Many Fish in the Sea”

Bio: Dr. Dre may be better known for Beats now, but back in the day, he was an incredibly influential rapper, helping kick-start the gangsta rap movement alongside Eazy-E, Ice Cube, Arabian Prince and DJ Yella in N.W.A. The group frequently came under fire for their lyrics, which some claimed glorified drugs and violence and were derogatory towards women. (No surprise, then, that their debut album, Straight Outta Compton, was one of the first albums to get a Parental Advisory label.) The group disbanded in 1991, but their influence still reverberates in rap today. They were first nominated for the Rock Hall in 2012.

Bio: While Trent Reznor is making a name for himself as David Fincher’s go-to film scorer, Reznor is still best-known for his work in the influential electro-industrial band Nine Inch Nails. In 2011, for Rolling Stone’s list of the 100 greatest artists of all time, David Bowie wrote about NIN’s 1994 album The Downward Spiral, saying: “Second to the Velvet Underground, there has never been better soul-lashing in rock…. It still sounds incredible today.” More recently, the band’s 2013 album Hesitation Marks was nominated for a Grammy for Best Alternative Music Album. This is the first year that the band was eligible for induction into the Rock Hall.

Essential Tracks: “Hurt,” “Everyday is Exactly the Same,” “Into the Void.”

Bio: Lou Reed’s band The Velvet Underground was inducted into the Rock and Roll Hall of Fame in 1996 by Patti Smith. In the wake of his death last year, it’s no surprise that he has now been nominated for his solo work. While Reed’s legacy is most closely identified with the Velvet Underground, some of the music he created on his own in a series of diverse and brilliant albums were as impressive as Velvet’s and, occasionally, even better. On his third nomination, it seems likely that he will be inducted this year.

Essential Tracks: “Satellite of Love,” “Perfect Day,” “Walk on the Wild Side”

Bio: Paul Butterfield and his American blues band were a fixture on the festival circuit in the 1960s, including sets at the infamous Woodstock and Monterey Pop festivals and the Newport Folk Festival, where Bob Dylan used them as his backing band. Butterfield was best known for his blues harmonica playing, while lead guitarist Mike Bloom­field helped the band create a pioneering sound that fused blues and jazz with a rock-and roll-sensibility. The band was nominated twice before for the Rock and Roll Hall of Fame, first in 2012 and again in 2013.

Bio: The Spinners have been making music for over 50 years: The soul music group had a long run of hits that are still in heavy rotation on oldies stations across the country. The group started in Detroit in 1954 under a different name before becoming The Spinners in 1961 and signing to the infamous Motown label in 1963. Their biggest success, though, came in the 1970s, after they signed to Atlantic Records. The group was originally nominated for the Rock and Roll Hall of Fame in 2011.

Essential Tracks: “Working My Way Back To You Girl,” “Could It Be I’m Falling In Love,” “I’ll Be Around”

Bio: Gordon Sumner, better known as Sting, was inducted into the Rock Hall by Gwen Stefani in 2003 with his influential 1980s band, The Police. This year, the activist, actor and musician is nominated for his solo career, which started with the release of The Dream of the Blue Turtles and continued through last year’s The Last Ship. He’s won nine Grammy Awards for his solo work. In 2011, TIME named Sting one of the 100 most influential people in the world.

Bio: The rocking blues guitarist who was equal parts Jimi Hendrix and Muddy Waters rose to fame in the 1980s on a wave of jam-heavy blues revival songs, known for unrepeatable riffs he would whip out on his electric guitar. He passed away at the age of 35, posthumously winning the Grammy Award for Best Contemporary Blues Album in1991. While Rolling Stone considers Vaughan to be the twelfth greatest guitarist of all time, this is the first year he was nominated for the Rock and Roll Hall of Fame. 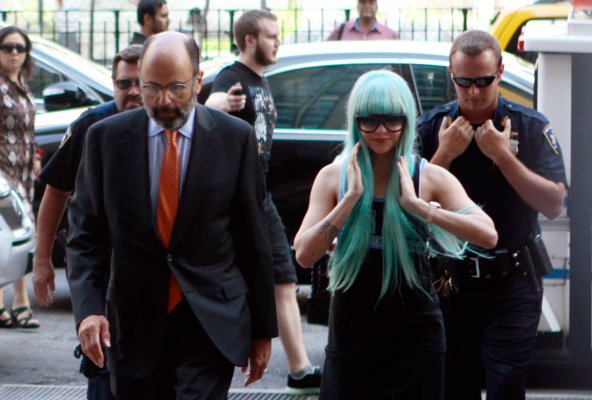 The Amanda Bynes Story Isn't a Story At All
Next Up: Editor's Pick