The Cast of Mad Men Bemoans the End of the Show

We didn’t find out much from the Mad Men crew at the Paley Center for Media in New York City Friday night. The notoriously tight-lipped showrunner Matt Weiner ensured that no spoilers or even hints were leaked to the PaleyFest audience before the first half of the seventh and final season premieres on April 13. In fact, he didn’t even speak and allowed his actors to answer questions for him.

But we did find out that Jon Hamm is really going to miss the show.

“A week from today we’ll start shooting,” Hamm (Don Draper) said of the final seven episodes, according to Entertainment Weekly. “We’re in some phase of grief at this point and it’s probably denial. We’re collectively starting to realize that the end is coming faster than we thought it was.”

Christina Hendricks (Joan Harris) said she’s “just bracing” herself. Jessica Paré (Megan Draper) said she cries “every day.” Elisabeth Moss (Peggy Olson) joked, “I don’t plan on seeing any of these people ever again,” though she said she texts Weiner every day about the “boulder on her chest” that came with the realization that the show is ending. The biggest lifestyle change may be for 14-year-old Kiernan Shipka (Sally Draper), who said, “I’ve been on the show longer than I haven’t, which is so weird to think about,” according to HitFix.

But even if they’re crying over the show ending, the actors may not being crying over what happens at the end of season seven—because they don’t even know. “I think some of us know where our characters are going to be, but I don’t think any of us have the scope, tone or vibe of the whole, and I think that’s probably been consistent through the majority of the show,” says Hamm. “Matt will tell us certain things or ask certain things about what’s going on in the characters’ lives.”

But if you’re desperate for Mad Men clues, maybe this enigmatic trailer for season seven will help: 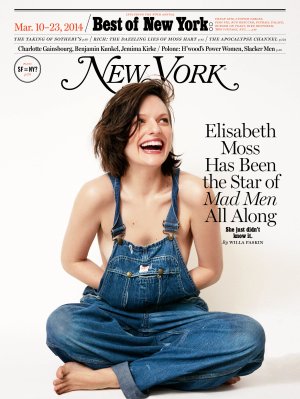 An Ode to <i>Mad Men'</i>s Peggy Olson: TV's Most Relatable Feminist
Next Up: Editor's Pick