Panic shows itself in a lot of ways–none of them terribly pretty. It’s when reason gets shouted down and shown from the room, when we quit being governed by what we know and instead by what we fear. It’s what America has been experiencing since Sept. 30, when news broke that the first Ebola case had been diagnosed in the U.S. The country’s nerves were already jangled by the continuing spread of enterovirus D68 (EV-D68), a flulike disease that has infected 664 people–most of them children–in 45 states so far and the District of Columbia. It has killed one 4-year-old New Jersey boy.

That disease is arguably the bigger threat on U.S. soil, but it’s Ebola that knocked us silly. Contagion has a way of doing that. The enemy is not just among us; it’s potentially invisibly within us–the most primal violation of all. Until recently, Ebola had a comforting, faraway otherness about it. But with confirmation of a diagnosis and, later, death in the U.S.–and let’s be clear, it’s the only such case so far–Ebola has gone from being a thing of there to a thing of here.

“One case has transformed the way we think about Ebola,” says Jane Risen, a behavioral scientist at the University of Chicago Booth School of Business. “It switched it from being impossible to possible.”

It doesn’t help that the victim, Thomas Eric Duncan, who died on Oct. 8, grew ill in Dallas after arriving from Liberia to visit his family, mainlining the disease straight to the heart of America. It doesn’t help either that Ebola is so sublimely awful. A disease that causes the very viscera to break down and bleed out is not the kind of thing that encourages rational thought. And so, accordingly, we have reacted irrationally, with ripples in many directions.

Airline stocks have tumbled on fears that international travel is a deadly risk. Attendance at Dallas schools fell 10% after parents began keeping kids home. Employees at a day-care center half a continent away on New York’s Staten Island have begun wearing latex gloves because many of the students are members of a Liberian community. Sales of hand sanitizers, surgical masks and other biohazard gear are soaring, according to online retailers. One of them, the reassuringly named LifeSecure, told Bloomberg News that its sales had spiked “several hundred percent.”

Social media, no surprise, have fed the blaze. Searches on Google related to the virus–including “Ebola que es” and “Ebola outbreak”–are up 1,000% this year. On Oct. 1, the day after Duncan’s illness was announced, online chatter mentioning Ebola peaked at 6,200 tweets per minute, compared with 100 tweets per minute before the announcement. Few of those posts are sharing the reassuring–and accurate–news that Ebola is hard to catch, is not an airborne virus and can be transmitted only by direct contact with the bodily fluids of an infected and symptomatic person.

Instead, they are 140-character rumors and horror stories. Public-health officials have thus had to scramble to refute claims that Ebola had broken out in Iowa (it hadn’t) and in New Jersey, after a passenger on a Newark-bound plane vomited–a symptom of Ebola, yes, but in this case simply a sign of an upset stomach.

Misinformation spreads through societies in much the same way diseases do, and it’s not just for irony’s sake that researchers use the word infected to describe the rumormongers who are exacerbating the problem. “We have millions and millions of people on these social networks,” says Ceren Budak, who studies online communications at Microsoft Research. “Most of them in certain cases are not going to have reliable information, but they’re still going to keep talking.”

In the center of the storm, the residents of the Vickery Meadow neighborhood in Dallas–a community of Liberians and other immigrants–are suffering in their own way. Rocks were thrown at the apartment complex where Duncan had stayed–and where his family members were quarantined before being moved to a townhouse nearby. Medical clinics, food pantries and after-school tutoring centers have gone begging for the volunteers who usually make up the staff, as outsiders shun the community–giving the people living there a second cause for worry.

“They’re not just scared about getting Ebola,” says Matt Karwowski, a contact tracer for the U.S. Centers for Disease Control and Prevention (CDC). “They’re scared about how they’re perceived by the community, what it’s going to be like to re-enter the community when it’s all over.”

As so often happens, some elected leaders are making matters worse, seeing a crack of political daylight and rushing to take advantage of it. “Could we have a worldwide pandemic?” Kentucky Senator Rand Paul wondered aloud in an interview with Breitbart News. Louisiana Governor Bobby Jindal and Texas Senator Ted Cruz–who, like Paul, are potential members of the GOP’s 2016 presidential field–raised the prospect of limits on travel to and from Sierra Leone, Liberia and Guinea, the three nations hardest hit by Ebola. It’s a move Paul endorses too and one that CDC director Dr. Tom Frieden says is exactly the wrong thing to do, since it would make it harder for medical teams and supplies to get to and from the region.

President Obama, likely sensing vulnerability on the issue, ordered stepped-up Ebola screening at airports in both the U.S. and West Africa. That will include taking the temperature of all passengers arriving from the African disease zone–a move that might calm nerves but would reveal nothing about any infected people in the symptom-free incubation phase. With Spain now reporting its first case of Ebola, in a nurse who had been caring for a patient with the disease, points of embarkation in Western Europe could come in for more scrutiny too.

None of this, the epidemiologists know, will do much to address the ostensible goal, which is to control the disease, stop its spread to the rest of the world and get help to the people who are stricken already. But none of it comes from the part of the human mind that is equipped to do such cool, focused, deliberate work anyway. It comes instead from the part where fear and suspicion and irrationality live. Putting the disease back in its box requires doing the same to our worst impulses first.

There is no good time for a disease like Ebola to strike, but in the U.S., the moment seems especially bad. Diseases largely eradicated here–measles, mumps, whooping cough–are suddenly reappearing, viral brush fires that could be easily eliminated if all parents vaccinated their kids. The SARS outbreak of 2003 and the swine-flu scare of 2009 have sensitized us to the threat of emerging pandemics. Then came the enterovirus, and then Ebola–literally a murderers’ row of bugs.

“For years we’ve been prepped for this kind of anxiety by public-health officials and the media,” says Philip Alcabes, a professor of public health at Adelphi University and the author of Dread: How Fear and Fantasy Have Fueled Epidemics From the Black Plague to Avian Flu. “We hear about pandemics, so in some cases people can’t be blamed for thinking that Ebola is that thing.”

In the more toxic provinces of the Internet, racial and cultural animus emerges–a common theme in times of epidemics. It showed itself during the Black Death in the 14th century, which Europeans blamed on astronomical or climate events. But since it’s hard to get angry at the stars or the skies, they blamed the Jews too and set about attacking their villages.

It happened again in the 1800s, when cholera hit New York City and Philip Hone, a former mayor, blamed Irish and German immigrants–“filthy, intemperate, unused to the comforts of life and regardless of its proprieties”–for such outbreaks. It happened in 2009, when the swine-flu outbreak led to the familiar seal-the-border refrain, the ineffective cure that is so often recommended for whatever ails us.

Kurt Gray, an assistant professor of psychology at the University of North Carolina at Chapel Hill, attributes the problem to what he calls “dyadic completion,” a term that sounds overwrought and overthought when people are panicking over a fatal disease but one that explains a lot. “We think of evil involving a dyad–a villain and a victim,” he says. “So when we have a victim, we’re looking for an evil entity to blame for the suffering.”

It’s this kind of thing that led evangelical pastor Pat Robertson to lay blame for the 2010 Haitian earthquake on a “pact to the devil” that the Haitians had struck and led former New Orleans mayor Ray Nagin to argue that Hurricane Katrina was in part divine retribution for U.S. intervention in Iraq. It’s also, Gray says, what explains why, after a swarm of locusts destroyed a year’s crops in France in the Middle Ages, officials put the locusts on trial–because what else was there to do?

“This happens all the time across a host of kinds of suffering,” he says. “A virus doesn’t have a mind that would allow it to choose to do harm, so when it comes to Ebola, we blame the outsider instead.”

Putting a brake on those base behaviors can be achieved, but it takes effort. Social psychologists see value in not even trying to make people think more rationally about risk without first acknowledging their fear–especially in the case of Ebola. “It’s not crazy to worry,” Alcabes says. “It’s a scary infection. So many people die.”

Barbara Reynolds, director of the CDC’s public-affairs division, put together a public-messaging protocol during the avian-flu outbreak that stresses an I-feel-your-pain approach. “I had to throw out all the paternalism that comes when we are trying to make sure people don’t panic,” she says. “The message isn’t going to get through if you don’t first say, ‘We get it.'”

Sometimes fear is not only understandable; it’s also actually useful. Frieden doesn’t mind if members of his Ebola team remain a little spooked by the disease. “We want them to be scared,” he said during a news conference. “We want them to channel that fear into being incredibly meticulous about infection control.”

Pushing back in the information wars can help too. Obama’s team has constantly reassured the public that the government “will stop the disease in its tracks,” a phrase that has enjoyed its own viral spread throughout the White House. The CDC is taking the fight to Twitter. One tweet that included an illustration of how the disease can and cannot be spread was retweeted more than 4,200 times, and the agency gained almost 5,000 new followers on the day after Duncan’s diagnosis.

Sometimes simple compassion can help too. In Dallas County, Judge Clay Jenkins has been assigned the job of overseeing the government’s response to the Duncan case. He conspicuously wore no biohazard gear when he entered the apartment in which Duncan and his family had been living. He also drove the family, which is being monitored twice daily in quarantine for signs of infection, to its new quarters himself and appeared immediately afterward before the press.

“I’m wearing the same shirt I was when I was in the car for 45 minutes with that family,” he said. “If there was any risk, I wouldn’t expose myself or my family.”

Somewhere in Jenkins’ brain the same panic circuits that all humans have surely went off, at least briefly. Yet he overcame them with reason and with a knowledge of how Ebola behaves. And he soldiered on.

It’s not entirely our fault if we fail to do the same. Millions of years of behavioral wiring tell us to be afraid. But it’s entirely to our credit if we rise above our fears. An epidemic, approached in the right way, can sometimes be an opportunity to cure more than just a disease. 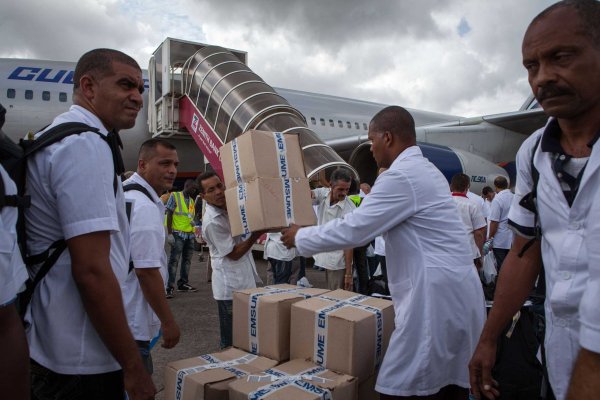