Call it a shot across the bow of the traditional banking system.

Having formally announced its intention in August to go public, major U.S.-based peer-to-peer (P2P) lender Lending Club is looking to take its growth to a new level.

The point of P2P—or marketplace lending—is to deliver better rates for both investor and borrower by realizing efficiencies through technology.

Let’s say you have $100 you’d like to invest in three projects you’ve found on a P2P marketplace. These can be anything—a new fence, perhaps, or money to pay down debt. The projects have varying degrees of risk because of the borrower’s relative risk of default. Say you bundle your three investments in a medium-risk portfolio and invest. Depending on the lending platform and holding all else constant, you could be looking at getting roughly an $8 return on your investment each year for three to five years. Longer term means less liquidity, but allowing for risk, that sure beats the going interest rate for a traditional savings account these days. The borrower walks away happy having acquired needed capital at a comparatively better interest rate. And the lending platform takes a cut for facilitating, or originating, the loan.

It’s a reaction against how traditional banking has met demand for smaller lines of credit like personal and small business loans: largely with more easily underwritten, higher-interest credit cards.

Lending Club’s announcement—widely reported in August—comes at a time when the demand potential for securing smaller personal loans is soaring.

In July, outstanding consumer credit in the U.S. inched up to a seasonally adjusted $3.24 trillion, which included roughly $880 million in revolving credit, a perennial refinancing option for consumers according to Lending Club’s S-1 filing. In the second quarter of 2014 alone, Lending Club facilitated more than $1 billion in loans, or roughly one-fifth of its $5.04 billion worth of loans to date.

Digging into the data on P2P lenders to look at the industry as a whole and to try to gain a deeper understanding of each specific lender, we focused on the three principal U.S. players—Lending Club, Prosper and Peerform—to determine the strengths and weaknesses of each company.

Looking at How the Major U.S. P2P Players Compare

While Lending Club is the clear leader in terms of total loans funded ($5.04 billion), there are nuances to each of the three major U.S. lenders. It’s important to evaluate all three—Lending Club, Prosper, and Peerform—from the perspectives of both a borrower and a lender to understand how these P2P lenders stack up.

Founded by Mikael Rapaport in 2010, New York-based Peerform is the relative newcomer in the group. Its average interest rate of 15.85 percent falls right between the average interest rates of Lending Club (14.4 percent) and Prosper (17 percent), while its reported return of 9.88 percent actually puts it above both major competitors in that category.

Lender states include all states except for Alabama, while borrower states number 23 in total. Peerform has an annual percentage rate (APR) range that tops out at around 28 percent. Keep in mind that the actual cost of borrowing is better represented by the APR, which considers fees and charges in addition to the interest rate.

As it turns out, later this month the Securities and Exchange Commission (SEC) may further restrict its definition of who qualifies as an accredited investor. Although Prosper and Lending Club don’t share Peerform’s accredited investor requirement, each of the three is regulated by the SEC.

Even though Peerform offers many of the same types of loans as its two major competitors, its loans only range from $1,000 to $15,000 (Lending Club’s range, by comparison, goes up to $35,000). And although its average origination fee is par for the course, its minimum credit score of 600 is by far the lowest among the three.

While we were unable to determine Peerform’s default rate (and subsequently the net yield at each loan grade), we did find that the effective yield (the average interest rate minus the service charge not accounting for late fees, recoveries, or charge-offs) for Peerform is the lowest of the three at each loan grade.

Based on the effective yield alone, Peerform is the least profitable of the three major U.S. P2P lenders.

We should also mention that it’s the most limited in terms of features and lender accounts, with a clear focus on individual investment accounts (Prosper has a similar focus, though it also offers a range of retirement accounts).

Average Interest Rate: 15.85%
APR Range: 7.1%-28.1%
Loan Terms: Not provided
Default Rate: Not provided
Reported Return: 9.88%
Conclusion: Its focus on accredited investors leaves it a step removed from the peer aspect of peer-to-peer lending. When it comes to how it fares against both Prosper and Lending Club, we’re left with a somewhat-incomplete picture.

Its average interest rate of 17 percent and reported return of 9 percent puts it above Lending Club in both categories, making it an even costlier choice for borrowers and an even more profitable choice for lenders, holding all else constant.

With that said, Prosper reports a slightly higher default rate of 7.29 percent. Using numbers we calculated based on lender information available, Prosper is the most profitable of all three. After accounting for its higher default rate, however, Lending Club actually delivers an average net yield that bests Prosper’s by 0.08%.

You can see in the visual that Prosper’s riskier loan grades (A being relatively lower-risk, lower-reward loans, and so on) have default rates that actually exceed their net yields.

Along with an average interest rate that is well above its two major U.S. competitors (17 percent), Prosper also has the largest APR range (6.7 to 35.4 percent). It posts a 3 percent origination fee, which is actually 0.05 percent lower than Lending Club’s, while its average loan of $7,840 is just over half of what Lending Club averages ($14,056).

Yields for Prosper’s example low-, medium- and high-risk portfolios are an average of 0.5 percent above representative risk portfolios with Lending Club. From just the standpoint of maximizing yield at each of the three risk classes, Prosper is the better choice for investors.

Although Prosper focuses on many of the same loan types that Lending Club does, it only requires a minimum credit score of 640, slightly below Lending Club’s requirement of 660, and it doesn’t offer nearly as many account types to its users.

With Prosper, lenders can lend in 31 states and borrowers can borrow everywhere except in North Dakota, Iowa, and Maine.

Lending Club’s APR ranges from 6.8 percent to 28.7 percent. Its higher-than-average origination fee of 3.05 percent means it can be a costlier option for borrowers.

Yet, Lending Club maintains the most extensive offering of account and loan types. For lenders, it operates in 26 states, and services are available to borrowers in every state except Alabama. Borrowers must have a minimum credit score of 660, three years of credit history, and a satisfactory debt-to-income ratio.

Although Prosper delivers yields that are on average 0.5 percent higher than Lending Club’s using example low-, medium- and high-risk portfolios, risk-seekers investing with Prosper might hesitate to give more weight to loan grades beyond C in their portfolios (recall that in our calculations, Prosper’s default rates exceed its net yields for its riskier loan grades).

While it may not be available in as many states as Prosper is, Lending Club comes out ahead when you consider that it offers its customers an unparalleled level of account and platform flexibility. It also has the highest credit score requirement and the lowest average interest rate of the three biggest U.S. P2P lenders.

It may be true that Lending Club faces various financing challenges—an over-reliance on credit score and the inability to securitize loans—that traditional banks can better mitigate. With a fairly tight margin last year and growing marketing and expansion costs that have erased its profits, it may also be called on to defend its valuation, currently privately estimated at $3.8 billion.

Even so, with more than $5 billion loaned and roughly $494 million in interest paid out to investors, it has provided borrowers and investors alike a comparatively consistent product for the exchange of capital.

In a space in which consistency is valued, Lending Club still has the upper hand on its two major competitors. For capital market investors who are interested, it’s the P2P lending service to keep an eye on.

Average Interest Rate: 14.4%
APR Range: 6.8%-28.7%
Loan Terms: 36 or 60 months
Default Rate: 6.04%
Reported Return: 8.3%
Conclusion: Lending club secures its leading place with the consistency and flexibility of its platform. With more account and loan types than either Peerform or Prosper, it has facilitated the highest amount in loans according to currently available information. While its reported return is lower than Prosper’s, so too is its default rate.

In building its peer-to-peer lending topic, FindTheBest relied on historical data in the form of seasoned returns (“seasoned” meaning multiple years). For Prosper, we used seasoned returns as of June 30, 2014 for loans originated from July 2009 to August 2013 available here on Prosper’s website. For Lending Club, we evaluated seasoned information for 2007 to 2014, which can be found here on Lending Club’s website. As originally stated in the article, Peerform did not provide comparable data.

FindTheBest believes using historical data for comparison purposes is a more accurate reflection of a lender’s performance for financial products that are inherently longer term. As with any investment decision, prospective investors and borrowers are encouraged to conduct their own research and to take into account that historical data are neither an indication of the current state of the market nor a predictor of future performance.

FindTheBest is a research website that’s collected all the data on Lending Club and Prosper and put it all in one place so you don’t have to go searching for it. Join FindTheBest to get all the information about peer-to-peer lending, personal finance and thousands of other topics. 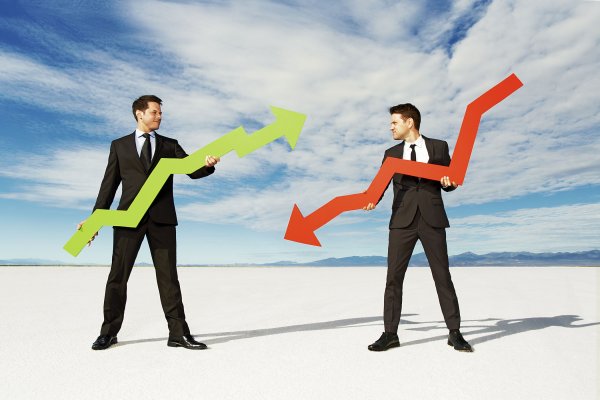 Find Out If You're Making as Much Money as Your Friends
Next Up: Editor's Pick