The Walking Dead, AMC’s zombie-packed horror epic, returns for a fifth season on Sunday, Oct. 12. Unlike season four, which began in muted, bucolic tones, this installment promises to debut with total discord. Former police officer-turned-group leader Rick Grimes (Andrew Lincoln) and his compatriots Glenn (Steven Yeun), Sasha (Sonequa Martin-Green), Maggie (Lauren Cohan) and others ended the season locked in a boxcar by a band of likely cannibals and definite sadists. If you missed anything leading up to those final moments, here’s a guide to what happened.

For an episode-by-episode refresher, check out our recaps below. If you don’t have time to watch or re-watch the entire fourth season in preparation, focus on the bolded episodes below for a speed run.

Synopsis
Last season, most of the show’s characters eventually made their way from the ruined prison they had been calling home and toward Terminus, a mysterious community at the end of the line (of train tracks, literally) that promised to offer sanctuary. Signs for Terminus suggested a safe haven. Rick and company found anything but. Here’s the official synopsis:

In other words, prepare for Tolstoy with zombies.

Characters
Rick. See below.
Michonne. Still a badass. Her relationship with Carl still seems in the zone of “that cooler, older cousin who introduces you to Morrissey.”
Carl. Last season, he showed he couldn’t hang with the kids anymore. Expect a teenager with child soldier tendencies.
Glenn and Maggie. They’re reunited, but death will probably come for one of them.
Beth. Beth appeared to have been kidnapped toward the end of the season. Daryl will likely go on the hunt once he can.
Carol and Tyreese. On their way to Terminus, presumably. Their run as substitute parents last season was about as successful as Hera and Zeus’.
Daryl, Sasha, Bob, Tara, Eugene, Abraham and Rosita. All in the rail car at Terminus.

Themes
Human-on-human cruelty. As the show has progressed, the walkers have receded into the background. What was, in season one, essentially a story about surviving the horrors of the living dead has now become a story about how humans treat one another a few years on from the end of the world. (That is, not well.) As Andrew Lincoln told TIME this week:

Rick as a man on fire. Rick has been a lot of different men over the past four seasons: a cipher for the disoriented viewer, an ardent optimist, a blessed peacemaker, a grief-stricken depressive, a tribal elder, a gentleman farmer. This season, the show’s teasers suggest a more vengeful, Old Testament Rick. Rick’s summation of being locked up was: “They’re screwing with the wrong people.”

Promotional artwork for season five seems to show a grizzlier Rick than we’ve seen before and, thus, probably some payout on the cliff hanger ending. After exploring the various aspects (and difficulties) of being group leader, a lot of fans feel it’s high-time the show got back to this version of Rick.

Deaths
Everybody. Well, not exactly — but a lot of people will die. Currently, bets are being taken on when Glenn, the former pizza delivery boy-turned-group scout, will get the axe. He didn’t die until issue 100 or so of the comics, but when he did, it happened in the most spectacularly gruesome and devastating way possible. The teaser photos hinted this event might be moved up in the television version of the fiction. Characters we wouldn’t mind see getting eaten: Baby Judith (sorry, but a baby is annoying to cart around during the end times) and Bob Stookey.

The Walking Dead returns to AMC on Sunday, Oct. 12. 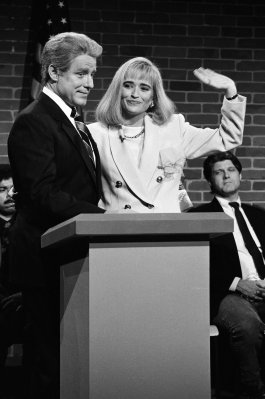 RIP, Jan Hooks: There's No I in SNL
Next Up: Editor's Pick