A Serial Israel-Basher Shouldn't Be Judging the Jewish State

According to the U.S. Code governing judicial conduct, a judge should recuse himself or be disqualified if “his impartiality might be reasonably questioned” for “a personal bias or prejudice concerning a party.” That should have led the U.S. to immediately denounce a charade that violates American law and tradition and leaves open the possibility that this flawed international commission’s findings could set legal precedents that not only further demonize our Israeli ally, but could negatively impact Americans defending our nation against terrorists in the future.

Schabas is already on record that when it comes to Israel/Palestine; his primary motivation is “to talk about crimes against humanity, war crimes and crimes of aggression that have been committed, all of which can be shown to have been perpetrated at various times during the history of the state of Israel.” His fondest hope would be to see Netanyahu “in the dock of an international court.” He’s even called for the prosecution for “war crimes” of Nobel Peace Prize winner, former Israeli President Shimon Peres.

It’s not too late for the U.S. to pull the plug on this travesty. This is why the Simon Wiesenthal Center has urged U.S. Secretary of State John Kerry as well as Attorney General Eric Holder to declare the UNHRC’s new kangaroo court against Israel without legal standing in the U.S., before it perpetrates another “legal” lynching that brazenly mocks our basic judicial standards.

Various U.S. administrations have had their hands full with previous UN-based “inquiries.” The UNHRC, renamed from the Human Rights Commission to the Human Rights Council in 2006, is an organization with a sordid history of invoking the cause of “human rights” while suppressing action against the world’s worst human rights abusers. It casts a blind eye to the inhuman rights records of Saddam’s Iraq, the Assads’ Syria, Bashir’s Sudan, the mullahs’ Iran, the Saudis’ male-only theocracy, China’s Tiananmen tank crew, sadists’ targeting of Tibetan society, the geriatric Castro brothers and late Hugo Chavez’s Latin prison farms.

Why didn’t these outrages find the their way to the UNHRC’s podium? For the simple reason that many of the heads these Orwellian regimes served on the UNHRC, sometimes even chairing it.

The UNHRC has served as a virtual good old boys club controlled by the world’s worst human rights abusers—including Iran, Sudan, China, and Cuba. Their main goals: to protect themselves and their allies from the glare of global spotlight on their human rights abuses; and to assure each other of a whitewashed clean bill of health while piling nonstop one-sided resolutions on Israel condemning the Jewish state—not Hamas terrorists—for “war crimes” and “crimes against humanity.” That first effort culminated in the 2009 Goldstone Report, which sought to degrade Israel’s ability to defend its civilians from non-state terrorists onslaughts. This report also set the stage for more international legal challenges to other democracies struggling against the transitional menace of terrorism. Its contents were so odious that Judge Goldstone ultimately repudiated it, implying he had been duped.

Here is an example of the kind of “guidance” from biased NGOs that the UNHRC relies on in drawing up its indictments against Israel. The International Organization for the Elimination of all Forms of Racial Discrimination (EAFORD) characterized Israel as “the largest open-air prison in the world” and accused it of “loose hordes of marauding gangs of Israeli illegal settlers” so as to launch pogroms against Palestinians. In addition, EAFORD charged “the human organs” of “dead, kidnapped and killed Palestinians…can be a source of immense wealth through illegal trafficking in the world market. Israeli physicians, medical centers, rabbis and the Israeli army may to be involved.”

The Bush Administration belatedly disengaged from the UNHRC, but the Obama Administration has eagerly reengaged with it. To paraphrase what has been said of unsuccessful second marriages, the results of Obama’s “smart diplomacy” in the case of the UNHRC has been a triumph of misplaced hope over experienced evildoers.

The threats of another dose of legal demonization of an embattled Jewish state from UN “justice” are clear. We wrote not only to the U.S. Secretary of State but also to the Attorney General of the United States because the UNHRC’s perverted norms of justice threaten to enter the bloodstream of American society and mores. The resulting damage to our legal and societal norms could corrode the foundations upon which the American experiment was founded: freedom and fairness. 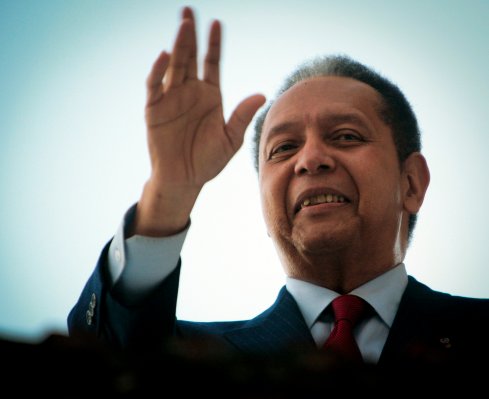 The Time I Met 'Baby Doc' Duvalier
Next Up: Editor's Pick