A year ago, the health care reform law was an albatross around the Democrats’ collective neck. Its disastrous roll out dominated headlines. Republicans gleefully predicted they would build on their House majority and take back the Senate in the midterm elections thanks to the unpopularity of President Barack Obama’s signature domestic achievement.

Republicans may well still pick up House seats and win the Senate—but if they do, it won’t be because of Obamacare. The “incredibly fading issue,” as U.S. News and World Report recently called it, it has become “background noise” in an election dominated by parochial interests, as Politico put it. Indeed, some Democrats are going so far as to predict that Obamacare could end up a silver lining come Election Day.

The Affordable Care Act is now the second-most important issue for unmarried women, according to a new poll by Democracy Corps for the Women’s Voices Women Vote Action Fund, a key demographic Democrats are hoping to turn out this November. Unmarried women vote reliably Democratic, but tend not to turn out in midterm elections. If Democrats can turn out that one group at the same levels they voted in 2012, forecasts indicate Democrats would keep the Senate and take back the House.

That kind of turnout is highly unlikely. But every little bit counts as Democrats try to fend off the kind of wave election that drowned them in 2010. That year, a genuine backlash against Obamacare helped Democrats lose the women’s vote for the first time since Ronald Reagan, and the House with it. In most battleground Senate races, Democratic candidates are winning by double-digits with women, particularly unmarried women

The law is also popular with minorities, another demographic with which Republicans have struggled. Some 74% of minorities support the Affordable Care Act, according to the Democracy Corps poll. “The health care law has become much more important as a reason why people are voting for Democrats,” says Stan Greenberg, a co-founder of Democracy Corps. “The threat of repeal appears to be giving unmarried women and minority voters a reason to vote.”

Republicans seem to have felt the tide receding. In April, Obamacare was the subject of 54% all political TV ads; by July that number had fallen to 27%, according to a July report from nonpartisan analysts Kantar Media CMAG. “Obamacare will not be the most important issue,” GOP pollster Whit Ayres, co-wrote in an August memo outlining 57 alternate lines of attack for outside spending groups such as Crossroads GPS and the American Action Network.

Still, opponents still use the issue far more than supporters; overall this election cycle, anti-Obamacare groups have spent 15 times as much on ads than groups supporting the law, the Kantar Media CMAG found. “Did Obamacare dominate the midterms as some Republicans had predicted? Definitely not,” says Larry Sabato, head of the University of Virginia’s Center for Politics. “But has it been used widely by GOP candidates for House and Senate in their TV ads and on the stump? A resounding yes. And that makes sense. Midterm elections are low-turnout battles between the two party bases. Any hot button issue that gets partisan voters to cast a ballot is used extensively. Obamacare still causes Republicans’ blood pressure to rise.”

The Affordable Care Act almost surely remains a net negative for Democrats. “It helped bake voters’ opinions into the general election cake,” says Jennifer Duffy, who follows Senate races for the nonpartisan Cook Political Report. “The early advertising effort also kept vulnerable Democratic incumbents on the defensive. This was particularly helpful in states in which Republicans had primaries.”

Support for Obamacare remains in the red, with 51.1% opposing the measure and only 38.7% supporting it, according to a Real Clear Politics average of national polls. Which is why the handful of positive ads Democratic candidates have attempted to run on behalf of the law—most notably in Arkansas and West Virginia—have been resoundingly mocked by Republicans.

But all the negative attention paid to Obamacare also had another side effect for Democrats. The four states that have seen the highest per capita anti-Obamacare ad spending—Kentucky, Arkansas, Louisiana and North Carolina—have conversely seen higher rates of enrollment, according to a July study by the Brookings Institution. “In the states where more anti-ACA ads are aired, residents were on average more likely to believe that Congress will repeal the ACA in the near future,” wrote the study’s author, Niam Yaraghi. “People who believe that subsidized health insurance may soon disappear could have a greater willingness to take advantage of this one time opportunity.” 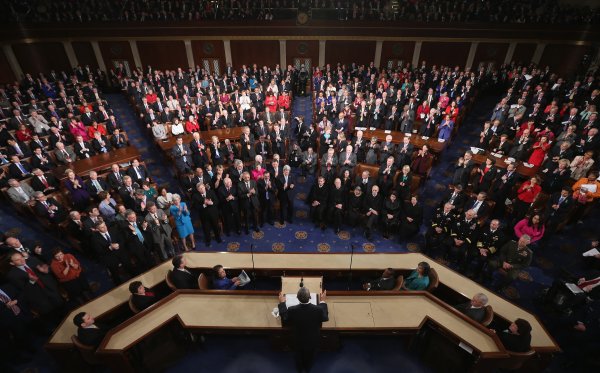 Study: Two-Thirds of Elected Reps Are White Males
Next Up: Editor's Pick