This Is How Ebola Patients Are Equipping Their Homes

When his wife grew sick with Ebola, Alex T. Kamanda didn’t have the option of sending her to one of Monrovia’s Ebola Treatment Centers. They were all full. But he knew how contagious the disease could be, and how risky it was to come in contact with her bodily fluids. So he did the best he could to protect himself while caring for her, wrapping his hands in plastic garbage bags until members of his church were able to bring him supplies. He mixed chlorine powder with water to make a disinfecting solution for his skin and a stronger version to clean up her vomit and diarrhea. It was a solution that almost certainly saved his life.

Caring for Ebola patients at home is a practice that is becoming more common in a region with not enough Ebola Treatment Units (ETUs), supplies or personnel to treat the sick—a stop-gap solution that is now being standardized in Liberia. But it’s not without controversy.

The United States has pledged to send up to 400,000 so-called “home treatment kits” to Ebola-stricken households in Liberia; some 9,000 have already been distributed, according to USAID. Each kit contains gloves, masks, disposable gowns and plastic aprons, along with chlorine powder, buckets, spray bottles and plastic bags to safely dispose of infected items.

This is not the gold standard infection control, but overcrowding in Liberia’s Ebola treatment centers leaves little choice. Government health officials and NGOs have already started door-to-door training so that affected families know how to use the equipment properly.

“’Perfect’ cannot be the enemy of ‘good’ in this case,” says Stephan Monroe, the deputy director of the Centers for Disease Control and Prevention’s (CDC) National Center for Emerging Zoonotic and Infectious Diseases. “Perfect is having patients in isolation centers with health care workers treating them, but we cannot build them fast enough.”

Treatment at home carries risks. Even fully trained and equipped health-care workers in isolation wards are getting sick. And there are concerns that providing the protection kits may encourage families to keep their loved ones at home, under the assumption that it is safe.

According to Amanda McClelland, the senior officer coordinating the Ebola response for the International Red Cross, the organization is starting to attempt safe home-based care training in Monrovia, and other groups are trying a variation of it in other locations. “We are really in this gray phase. We have to do extraordinary measures to do the best we can until the isolation centers have met the demand in the next few weeks,” says McClelland. “There’s a lot of pressure on us and other organizations to undertake things like home-based care. Which is shifting the risk from health workers to families. It’s dangerous, but there are not many other options.”

The Red Cross will have volunteers in every affected community, and if they get a suspected case they will try to transfer the patient to a treatment center, but if they can’t, they will help the family isolate the patient in the home, even if it is just a mattress tucked behind a makeshift drape. They will also train a family member to care for the patient as safely as they can until admission into a treatment center can be arranged. “It is quite a reasonably controversial idea. It’s really the measures of last resort that we are in at the moment,” says McClelland.

The missionary group Samaritan’s Purse announced on October 7 that it has also launched home-based intervention training in the most remote areas of Liberia by instructing caregivers in infection control and giving families home care kits. The Samaritan Purse kits, in addition to the basic protective gear, also include medicine to treat Ebola’s side effects, like pain, dehydration and diarrhea. So far they’ve been equipping families in an area along the River Gee in southern Liberia where cases have been on the rise, but there are no Ebola treatment centers nearby.

On Oct. 3, USAID administrator Dr. Raj Shah said in a press conference that USAID is offering support in the distribution of hygiene and protective equipment kits “so families can protect their patients in their families.” USAID, along with UNICEF and the World Health Organization, has already distributed 9,000 of those kits. According to Shah, another 10,000 are on their way, and are being distributed throughout Liberia.

According to U.S. ambassador to Liberia, Deborah Malac, home care is a short-term solution. “Until you have some place to take someone to receive further treatment, you need to protect yourself and family members as much as possible,” she says. “So [the kits are for use] in the home, but not for long term care, [and only] if there is no other alternative.” That kind of temporary solution to a vexing public health problem is also likely to be well received on the ground. The ETUs are simply taking too long, says Kenneth Martu, a community organizer in Westpoint, one of the hardest hit areas of Monrovia. “You call for an ambulance, and they say there are no beds available [in the treatment centers]. So home care is one of the best approaches in the fight against Ebola. It’s what we can do in the absence of beds. We need to prevent Ebola’s spread.”

With reporting by Aryn Baker / Monrovia 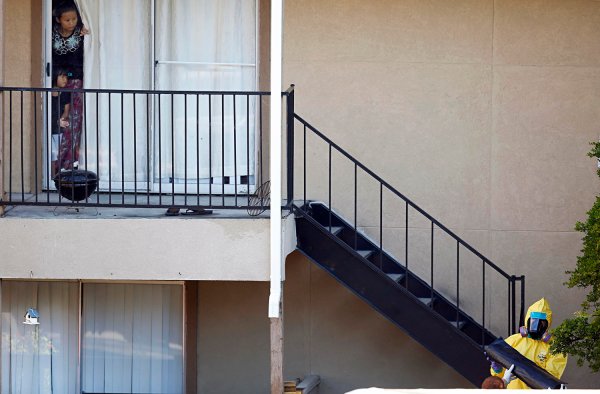