When two Spanish missionaries working in Sierra Leone contracted Ebola and were evacuated to Madrid’s Carlos III hospital, city officials and the country’s health minister assured a nervous public that the hospital’s strict protocols would prevent transmission of the virus to health workers and other patients.

But something went wrong. A 40-year-old nursing assistant has become the first person to contract the disease outside of Africa after helping care for one of the missionaries, Manuel García Viejo, before his death on Sept. 25. The nurse, who has not been named by the hospital, was infected despite being fully outfitted with two layers of protective gear on the two occasions she helped treat him. She also reported to the hospital that she was suffering from a fever a full week before she was admitted to a highly secure isolation ward early Tuesday morning. At this point no one knows exactly where a mistake was made. But the fact that the hospital’s rigorous checks couldn’t prevent the nursing assistant from becoming sick raises the question: is Europe less prepared for Ebola than it thinks?

“It came as a true surprise, and a stunning one,” says Máximo González Jurado, president of the General Nursing Council (CGE), which represents Spain’s nurses. “We thought we were well prepared, and that the risk—even if it can’t be zero—was minimal. After all, we have very good, very modern health care. Spain has the seventh best health care system in the world.”

At Hospital Carlos III, the 30 health workers who had contact with the infected missionaries donned double layers of head-to-toe protective gear each time they entered the isolation room where the patients were housed. They were also required to take their own temperatures twice daily during the 21-day incubation period for the disease. It was through that protocol that the infected nurse first reported on Sept. 30th that she had a temperature of 38.6 C (101.5 F).

For reasons that are still unclear—possibly because the fever was relatively low, but perhaps because in its early stages, Ebola’s viral count can be too low for detection—the disease was ruled out. Like Thomas Eric Duncan, the visiting Liberian who presented himself at a Dallas hospital on Sept. 25, the nurse was sent home. On vacation from work, she stayed there until an ordinary ambulance brought her to her neighborhood hospital on Oct. 6 with a fever that was by then raging.

“It would have been better if she had entered the hospital on the 30th,” Fernando Simón, emergencies coordinator for the Health Ministry, admitted to the press. But that possible mistake is not the only one under scrutiny. In August, a male nurse at Hospital La Paz, which is affiliated with Carlos III, wrote an anonymous post for the blog of the Madrid Association of Independent Nursing, in which he complained that the staff was not sufficiently trained in Ebola protocols, and that it had not performed any simulations of Ebola treatment by the time the two missionaries arrived.

It’s a complaint repeated by González, the nursing council’s president. “In the case of avian influenza A, the government formed a crisis cabinet, there was exhaustive information available to the public and complete training for health professionals,” he said. “That was not the case with Ebola. According to the information we have, the staff were not receiving the kind of in-depth training they should have.” Those who cared for the two missionaries were not isolated, a protocol that has since changed with the nurse’s case.

“We don’t do many simulations in Spain, and we need to, we need to professionalize this more,” says Dr. Antoni Trilla, epidemiologist at the Hospital Clinic of the University of Barcelona. “It’s only through achieving real verisimilitude that you discover the flaws in your protocols.” He should know: his hospital has had two Ebola scares, both of which turned out to be negative. But the cases enabled the hospital to improve, for example, its procedure for one of the most dangerous moments of care: removing protective gear after contact with the infected.

But even improved training has its limits, especially for a disease so highly infectious as Ebola. “What we know from the situation of healthcare workers in west Africa is that it is sometimes actually people who appear to have taken all the precautions that fall ill,” says David Moore, Professor of Infectious Diseases and Tropical Medicine at the London School of Hygiene & Tropical Medicine.“They may have dropped their guard when removing protective gear or in disposing of a dead body. In west Africa, they learnt that lesson the painful way.”

Caregivers in Europe are likely to learn that lesson too. “It’s unavoidable that there will be other cases like this,” says Zsuzsanna Jakab, European regional director for the World Health Organization. “But Europe—and especially the European Union—is well prepared. I would even say it’s the best prepared region.”

It may need to be. So long as air travel continues to and from the three countries in west Africa worst affected by the disease, the risk of further outbreaks remains high. With nearly 30% of the air passengers leaving Guinea, Liberia and Sierra Leone flying to Europe, the risk of more cases appearing in Europe is real—and growing. A study published in the scientific journal PLoS on Oct. 6 put the risk of Ebola being imported to France by October 24 at 75% and to the UK at 50%. The results were based on levels of air traffic.

It’s healthcare workers like the Spanish nursing assistant who will likely be worst affected. The unnamed woman was in a stable condition as of Tuesday evening, and is receiving immunotherapy in the form of a serum made from the blood of an Ebola patient who recovered. Three people, including the nurse’s husband, have now been placed in quarantine, with medical staff who treated her under observation, and contact tracing of friends and family. But even if she remains an isolated case, others are sure to follow. “We’re never going to see this become an epidemic among the general public in Europe,” says Dr. Trilla. “But there is definitely a risk for medical personnel. They’re the ones I worry about.”

— With reporting by Naina Bajekal / London 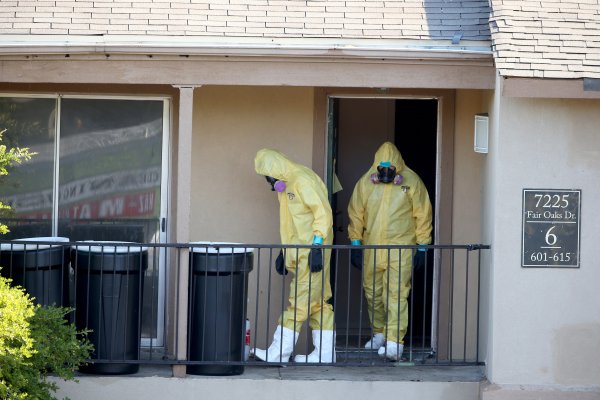