The vast majority of parents, pediatricians and media researchers all believe that violent movies, video games and television shows can lead to increased aggression in children, according to a new study published in the journal, Psychology of Popular Media Culture.

In the past, there was a perception that the field was divided about whether children’s behavior could be affected by violent content. This study dispels that notion completely by showing that, in fact, there is broad consensus that violent content can lead to more aggression.

For the study, the researchers — Professor Brad Bushman of Ohio State University, Carlos Cruz, a doctoral student at Ohio State, and Mario Gollwitzer, a professor at Philipps University Marburg in Germany — surveyed 371 media psychologists and communication scientists from three professional organizations; 92 members of the Council on Communication and Media of the American Academy of Pediatrics; and a nationally representative sample of 268 American parents. The study revealed that 66 percent of researchers, 67 percent of parents and a whopping 90 percent of pediatricians agree or strongly agree that violent video games can increase aggressive behavior among children.

Brad Bushman, lead author of the study and professor of communication and psychology at The Ohio State University believes the journalistic drive for fair and balanced reporting is partially to blame for the view that there is a lack of consensus. “I think there’s a perception partly driven by the mass media that the field is divided,” said Bushman. “When they report on a finding that violent media produces aggression in children, to find a balance, they find someone else who disagrees with it. It leads to the conclusion that scientists don’t know about this topic and that the field is divided. But the field is not divided. There is broad consensus that violent media leads to increased aggression in children.”

He compared the drive for balanced reporting to John Oliver’s piece on climate change, in which the late night host revealed the trouble with showing a one-to-one debate, when in fact 97% of the science community believes climate change is real and happening. To make the debate more representative of reality, Oliver invited three climate change deniers to argue against 97 climate scientists who believe in global warming.

The results in Bushman and his team’s study go hand in hand with a study published last year in the journal of Pediatrics. That study, lead by researchers Lindsay A. Robertson, Helena M. McAnally and Robert J. Hancox showed a link between children and adolescents who watch two or more hours of TV per weekday— in which most of the content contains violence — and antisocial behavior in early adulthood.

But there are other factors besides screen time and violent content that can lead to aggression in children. “Many factors can contribute to increased aggression in children. Things like being male, poverty or having a low IQ are not easy to change, but limiting exposure to violent media can be changed,” said Prof. Bushman.“This is one of the factors that people can do something about.”

Aside from going full-Tipper Gore and founding a media watch group and petitioning Congress to limit violence in the media, what can a parent do? Bushman has a few suggestions: Limit screen time, monitor what your kids are watching or playing online and talk to your kids about it. It’s what Bushman does with his own 14-year old son. “The American Academy of Pediatrics recommends no more than two hours of screen time per day —[My son] has more than that. But, we carefully screen the content,” said Bushman. “There’s no TV in his room, he has an iPad, but has to use it with the door open and give us the iPad at night. All TV programs with violent content can only be accessed via password. And the internet filters out violent content. There are no video games that are age inappropriate.”

When asked if his two older children — ages 18 and 19—ever show their younger sibling something inappropriate, Bushman laughed. “Their dad has been studying the affects of violent media for over 25 years. They know better.” 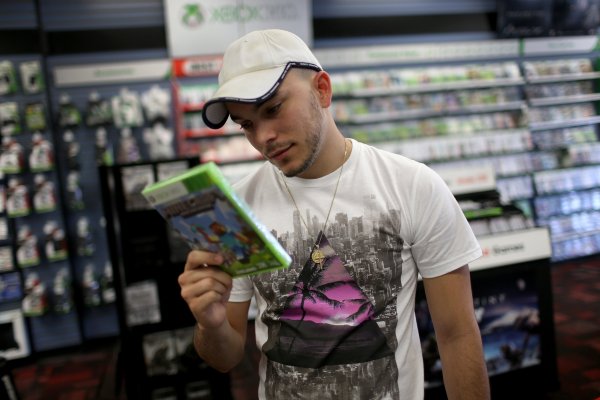