I'm Beautiful, But Hire Me Anyway

Physical attractive ought not work against you—but in HR offices it might
Johnny Greig; Getty Images
By Michael D. Lemonick

It has ranked among the top ten irritating TV ads of all time. “Don’t hate me because I’m beautiful,” pouted actress and model Kelly LeBrock back in 1980, tossing her hair coquettishly as she shilled for Pantene shampoo. What few people realized at the time was that the tag line came close to describing a real type of discrimination. It wasn’t in the form of jealousy from other women, as the commercial implied; that trope has never really held up to much scrutiny. But beautiful women do face other challenges; a study published just the year before the Pantene ad ran showed that attractive women often encounter discrimination when applying for managerial jobs—with beauty somehow being equated with reduced authority or even competence. The authors called it the “beauty is beastly” effect.

What the study didn’t address, says Stefanie Johnson, assistant professor of management and entrepreneurship at the University of Colorado, Boulder, is what women are supposed to do about it. Neither did a study she herself conducted in 2010 which showed that the effect applied to a wide range of jobs normally thought of as masculine.

But a new study Johnson and two colleagues just published in the journal Organizational Behavior and Human Decision Processes does tackle the question more directly. The improbable-sounding conclusion: if you’re beautiful and female, acknowledge it. Simple as that.

Well, not quite that simple. The research doesn’t suggest attractive women say straight out, “Yes I know, I’m gorgeous.” It is, says Johnson, “a little more subtle than that.” What she and her colleagues did was to recruit 355 students, male and female, and ask them to evaluate four fictitious candidates for jobs in construction—three male and one female. The applications included photos, and the female applicant was either unusually attractive or unusually unattractive—qualities evaluated by an independent crowdsourcing group.

In some cases, the attractive woman made no reference to either her appearance or her gender in the written application. In others, she referenced her appearance, but subtly, writing something like “I know I don’t look like a typical construction worker, but if you look at my resume, you’ll see that I’ve been successful in this field.” In still others, the attractive woman referred to her gender in a similar way (“I know there aren’t many women in this industry”), but not her beauty.

The unattractive female applicants did the same (although the “I known I don’t look…” part was may have been seen as a mere reference to her gender). In general, the “employers” tended to hire attractive women more often if they alluded either to their gender and to their beauty. With the unattractive woman, referencing gender directly made no difference—but referencing appearance made them less likely than average to be hired.

The study does have holes—rather gaping ones, actually. For one thing, the construction industry is not remotely typical of the field in which gender bias usually plays out. Like it or not, there is a real reason most construction workers are men—and that’s because they are, on average, physically larger than women and have greater upper body strength as a result. It’s the reason we have women’s tennis and men’s tennis, a WNBA and an NBA and on and on. As with the less attractive candidates in the study, the attractive ones’ reference to their appearance might well have been interpreted to mean simply that the typical applicant appears—and is—male. Johnson’s findings would carry a lot more weight if her hypothetical candidates were applying for the kinds of positions in which the gender wars really do play out—vice president of marketing in a large corporation, say.

Still, as a starting point, her research has value, and she does appear to be onto something. “What we think may be going on,” Johnson says, “is that the person doing the [hiring] has an unconscious bias.” But when that bias is brought to the conscious level, triggered by the woman’s addressing it head-on (sort of, anyway), it loses force. “Once you acknowledge it,” says Johnson, “it goes away.”

The takeaway message, she argues, is not that you should feel sorry for good-looking women, since attractive people, both male and female, have all sorts of advantages overall. “It’s more that we’re exposing a more subtle form of sexism,” she says. “People are still stereotyping women.” That, all by itself, is a form of discrimination, even if in this case it’s a form few people think about. 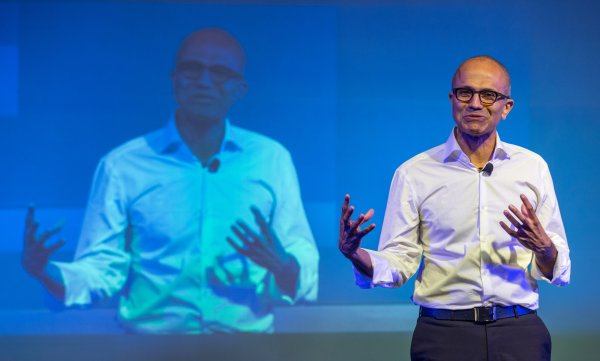 Microsoft's Leadership Is Less Than 20% Female
Next Up: Editor's Pick