Obama: U.S. Will Beef Up Airport Screenings for Ebola

President Barack Obama meets with members of his national security team and senior staff to receive an update on the Ebola outbreak in West Africa, Oct. 6, 2014, in the Roosevelt Room of the White House in Washington.
Jacquelyn Martin—AP
By Zeke J Miller

President Barack Obama said Monday that the U.S. is working on additional passenger screenings for airline passengers flying from Ebola-stricken West Africa, two weeks after a Liberian man infected with the disease entered the country.

Officials are “going to be working on protocols to do additional passenger screenings both at the source and here in the United States,” Obama said, addressing reporters following a briefing on his administration’s response to the epidemic in Africa and efforts to keep the disease from spreading to the U.S. “All of these things make me confident that here in the United States at least the chances of an outbreak, of an epidemic here are extraordinarily low.”

The president did not give specifics on the new screening measures, and Dr. Tom Frieden, director of the Centers for Disease Control and Prevention (CDC) declined to elaborate further in an interview with CNN after the meeting.

Obama also said other countries need to “step up” to address the spread of the disease, which has already killed thousands. “Although we have seen great interest on the part of the international community, we have not seen other countries step up as aggressively as they need to,” he said. “So I’m going to be putting a lot of pressure on my fellow heads of state and government around the world to make sure that they are doing everything that they can to join us in this effort.”

The U.S. has deployed more than 100 medical professionals and is readying to send as many as 4,000 troops to help contain the outbreak in West Africa, while border agents and flight attendants are receiving training materials on how to spot potential travelers infected with Ebola.

But the disease’s long incubation period means that infected travelers may not show signs of illness for as long as 21 days after they’ve been exposed, a gap that allowed Thomas Eric Duncan to enter the U.S. last month from Liberia via Brussels.

Duncan is in “critical, but stable” condition in a Dallas-area hospital after being admitted last Sunday, and is being treated with an experimental drug called brinciodofovir. Ebola is only contagious once the infected individual shows symptoms, meaning fellow travelers were not in danger.

U.S. officials have said that it is possible that others infected with Ebola may enter the United States, but have expressed confidence that they will be quickly isolated once they show symptoms. A sick passenger on a flight from Brussels to Newark, N.J. was greeted by medical crews including officials from the Centers for Disease Control and Prevention (CDC).

“Procedures are now in place to rapidly evaluate anybody who might be showing symptoms,” Obama said. “We saw that with the response of the airplane in Newark and how several hospitals across the United States have been testing for possible cases. In recent months we’ve had thousands of travelers arriving here from West Africa, and so far only one case of Ebola’s been diagnosed in the United States, and that’s the patient in Dallas.”

In an interview with CNN after the meeting, Dr. Tom Frieden, the CDC’s director, declined to elaborate on the potential new screening measures. 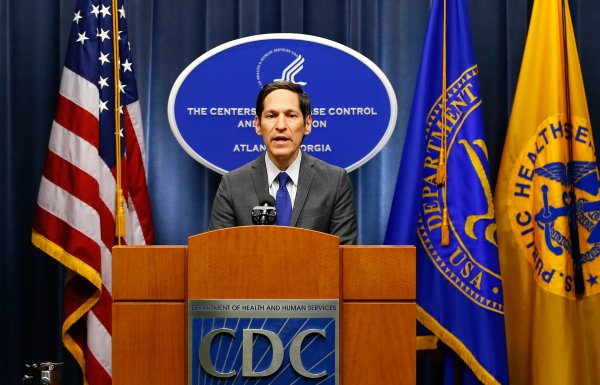 Dallas Ebola Patient Gets Experimental Drug
Next Up: Editor's Pick