Assassin's Creed Unity Will Only Run at 1080p on PCs

Ubisoft’s upcoming Assassin’s Creed Unity, a sneaking game about two secret societies warring during the French Revolution, will only be capable of 1080p display resolution if you’re rocking a Windows PC.

The 1920-by-1080 club’s doors are officially closed to game consoles, says Ubisoft. What’s more, both consoles will top out at 30 frames per second (enthusiasts tend to prefer games that run at 60).

Speaking with VideoGamer.com, Unity senior producer Vincent Pontbriand said the PlayStation 4 and Xbox One CPUs weren’t up to the job of juggling the game’s massive crowds.

“Technically we’re CPU-bound,” he said. “The GPUs are really powerful, obviously the graphics look pretty good, but it’s the CPU [that] has to process the AI, the number of NPCs we have on screen, all these systems running in parallel.”

Pontbriand says Ubisoft Montreal’s design team, which had been hoping for a “tenfold improvement” in A.I. performance from the new consoles, was surprised and frustrated by the bottleneck. “It’s not the number of polygons that affect the framerate,” he said. “We could be running at 100fps if it was just graphics, but because of AI, we’re still limited to 30 frames per second.”

Frame rates aside, the pixel difference between 900p and 1080p would in theory be a GPU- and not CPU-related bottleneck, thus locking both consoles at 900p may have been a political decision.

Indeed, Pontbriand told VideoGamer.com that the studio “decided to lock [both PlayStation 4 and Xbox One versions] at the same specs to avoid all the debates and stuff.”

PlayStation 4 and Xbox One buffs have been locking horns since the systems launched last November over worries the Xbox One isn’t as powerful as Sony’s system. The concern is premised on the way each system displays graphics, and games released for both consoles have so far run at slightly lower resolutions on the Xbox One, though developers have argued the differences are visually trifling.

Last fall, when Assassin’s Creed IV: Black Flag arrived, both PlayStation 4 and Xbox One versions ran at 900p. But Ubisoft quickly released a patch that upgraded the PlayStation 4’s visuals to full 1080p. Given Pontbriand’s statements, it seems unlikely it’ll do something similar with Unity.

The corollary to all of this? The highest fidelity version of the game, assuming you have enough processing gas to cook with, is going to be on Windows PCs. 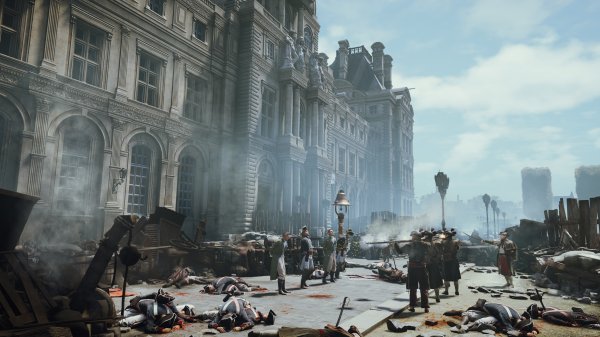 How Assassin's Creed Unity Navigates the French Revolution's Politics
Next Up: Editor's Pick