The Real Silver Lining of the Absurd AIG Lawsuit

Have I mentioned how outrageous it is that AIG shareholders are suing the government over the AIG bailout that prevented them from total wipeout? Have I compared them to homeowners suing the fire department for getting their furniture wet while saving their home? Have I mocked the bailout critics who admit this lawsuit is “asinine” and “mostly insane” but still claim it’s performing a public service?

Oh, I have? Just last week?

Well, this week, the critics will get their wish, as the architects of the Wall Street bailouts—Hank Paulson, Tim Geithner and Ben Bernanke—are scheduled to testify in this frivolous lawsuit. So this is a good time to concede there actually is a silver lining to this cloud of absurd litigiousness. But it definitely isn’t what the critics think it is. It’s that the AIG lawsuit, while breaking new ground in chutzpah, might help remind Americans that even though government rescued some Wall Street firms, the financial crisis still cost a lot of Wall Street investors a lot of money. The financial sector emerged way better than it would have without government help, and it’s certainly thriving today, but financiers didn’t all emerge unscathed.

The critics have applauded the lawsuit for a very different reason. They expect this week’s testimony to reveal The Truth about AIG, which will surely involve Geithner and Goldman Sachs conspiring with Colonel Mustard to destroy Main Street while bwahahaha-ing all the way to the bank. In fact, the truth about the AIG bailout is already out there. It was infuriating, because bailouts are always infuriating, but it was necessary and ultimately successful. After insuring toxic mortgage assets for every major global financial institution, AIG was dead in the water in September 2008, and its failure in the wake of the Lehman Brothers collapse could have shredded the global financial system. Not only did the $182 billion AIG bailout save the firm, it saved the system. And U.S. taxpayers eventually recouped their entire investment in AIG, plus a cool $22.7 billion in profit.

The bailout helped AIG shareholders, too. Their equity was worth something instead of nothing. Former AIG chief executive Hank Greenberg, the lead plaintiff in the lawsuit, unloaded $278 million worth of company stock in 2010; it presumably would have been worth nothing if the government had let the firm declare bankruptcy and the global economy implode. Greenberg’s complaint that the government unconstitutionally seized his property—and that AIG was entitled to the same bailout terms as much less troubled banks that posed much less of a threat to global financial stability—should have been laughed out of court.

That said, it’s important to recognize that while AIG’s shareholders didn’t lose everything, they lost an unimaginable amount of money. AIG stock plummeted from a high above $150 a share to less than $5 the day of the bailout. The government then took over 79.9 percent of the company, further diluting the value of each share. And when AIG needed more help, there was even more dilution. In his memoir, Stress Test, Geithner recalls how at a time when the country wanted his head for being too gentle with AIG, Greenberg visited him to complain that the Fed had been overly harsh by taking so much equity in AIG. “I told him we hadn’t done the deal to make money, and we’d be happy to sell him back some of the equity if he’d be willing to take some of the risk,” Geithner recalled. Greenberg wasn’t willing, so taxpayers rather than shareholders enjoyed most of the upside of AIG’s recovery.

I helped Geithner with Stress Test, so I’m biased, but I think Greenberg’s pique is silly; there wouldn’t have been any upside for anyone if the government hadn’t stabilized AIG and the rest of the system. At the same time, I think the terms of the AIG bailout were legitimately tough on investors who made bad bets on a reckless firm. They were certainly tougher than the terms of the broader Wall Street bailout known as TARP—and some bankers complained bitterly about TARP’s terms, which were intended to be (and were) tough enough to encourage banks to pay them back as quickly as possible. All of the bailouts were designed to balance the need to quell the panic in the markets and pave the way for economic recovery with the need to protect taxpayers. They ultimately did both.

The larger point, so often missed in the post-crisis too-big-to-fail debate, is that the lavish Wall Street bailouts did not shield all of Wall Street from pain. Critics of the bailouts often say they sent a message that you could invest in Wall Street behemoths without risk, that government would cover all your losses when markets turned sour. It’s amazing this even needs to be said, six years after a financial shock five times as large as the shock that preceded the Great Depression, but that’s simply wrong. Some of the jerks in suits took baths. Main Street bore the brunt of the pain, and that’s not fair, but there was plenty of pain on Wall Street, too.

Lehman Brothers disappeared; its shareholders were wiped out, and its executives all lost their jobs. Investors in Bear Stearns, Fannie Mae, Freddie Mac, Countrywide, Washington Mutual, Wachovia, Citigroup, Bank of America, GMAC, and other firms that got sucked into the crisis took baths, too. Very few of the big Wall Street CEO’s kept their jobs after the bubble burst, although some were fortunate enough to cash out their stock before the house of cards toppled completely. Some savvy investors have taken advantage of the misfortunes of others; David Tepper, a hedge fund manager, made billions by buying bank stocks after the market hit bottom in March 2009, essentially betting on the success of the government rescue plans. But markets always have winners and losers; the bailouts did help some of the losers limit their losses, but they didn’t change that essential capitalist truth.

So we should mock the gall of the litigants who are suing the fire department that saved their homes. Still, we can recognize that some of their furniture got wet. 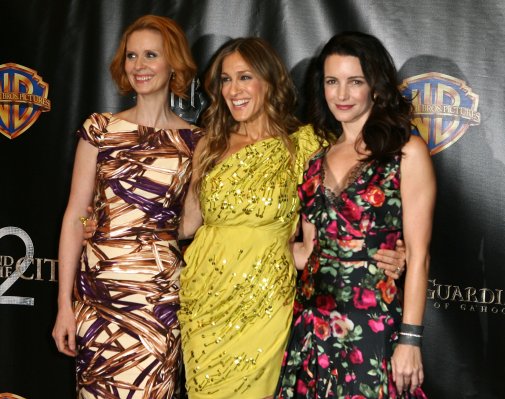 Don't Get Too Excited, Fans: A Third Sex and the City Movie is a Stretch
Next Up: Editor's Pick