Here Are the States Where Gay Couples Can Get Married

Wyoming became the latest state to legalize gay marriage Tuesday after state lawyers filed a legal notice saying they would not appeal a court decision that overturned the state’s same-sex marriage ban. That means gay couples can now marry in the state where gay teen Matthew Shepherd was beaten to death in 1998, in what became known as a high-profile hate-crime.

The news comes after a federal judge struck down Arizona’s same-sex marriage ban Friday, making Wyoming the latest in a series of court decisions that have opened the door for gay marriage in that state and 12 others this month.

The Supreme Court’s Oct. 6 decision to reject appeals from five states—Indiana, Utah, Wisconsin, Oklahoma and Virginia—seeking to limit same-sex marriage seems to have created a domino effect in the lower courts. The decision to deny appeals signals that the Supreme Court agreed with lower courts’ rulings that restrictions on gay marriage were unconstitutional, but the Court did not yet want to make a sweeping ruling that applies to all 50 states.

On October 7, a federal court in San Francisco declared Idaho and Nevada’s gay marriage bans unconstitutional. After issuing a temporary block on the ruling, the Supreme Court removed the hold on October 10, allowing same-sex marriages to move forward in those states as well. Nevada started issuing marriage licenses on the Oct. 9, Idaho couples began getting married on Oct. 15.

And on Oct. 12, an Alaska court overturned the state’s 16-year old constitutional amendment banning gay marriage, allowing same-sex couples to marry for the first time. Governor Sean Parnell said the state would appeal, but that case would go to the Ninth Circuit, the same court that struck down Idaho and Nevada’s gay marriage ban.

The above map currently shows where gay couples can and can’t get married, as of Oct. 17. The graphic will periodically be updated to reflect further appeals and rulings.

Correction: The graphic originally misidentified the state of Missouri. 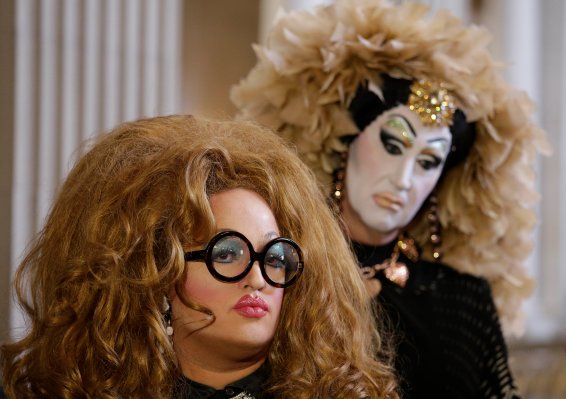 Facebook Apologizes for Blocking Drag-Queen Profiles
Next Up: Editor's Pick