There were plenty who expressed dismay that Jeff Goldblum would not be in the 2015 sequel to Jurassic Park, but it looks like the actor’s fans won’t have to worry about a similar outcome for the long-rumored Independence Day sequel. In an interview with TIME, Goldblum said that though it’s not official, director Roland Emmerich and producer Dean Devlin (the pair shared writing credits on the original film) have told him there’s a part for him in the sequel, which appears increasingly inevitable. “I had a meeting and have been talking over the last several months or year with Roland Emmerich and Dean Devlin, the producer, and they’ve been cooking up and say they have a part for me in what they hope will be a plan to make another one pretty soon,” Goldblum tells TIME.

More immediately, Goldblum starred in General Electric’s recent commercial for its new LED lightbulb, which can be turned on and off by a cell phone. Comedy duo Tim & Eric, who have worked with Goldblum on a handful of projects in recent years, directed the appropriately absurd two-minute spot. TIME spoke with Goldblum about the commercial, his guest-starring role on The League and his interest in hosting Saturday Night Live again:

TIME: How did you first get involved with the GE commercial?

Jeff Goldblum: Through the usual channels and whoever talks to whoever, and then you hear about it. But wait a minute, did I first—no, I guess it was regular channels. But then I have a personal in-touch-ness and friendship with Tim and Eric, the great Tim and Eric. Tim Heidecker and Eric Wareheim, because you know I’d done a couple things with them on their first show, Tom Goes to the Mayor, and then on their second show, Tim and Eric Awesome Show. I always enjoyed them, I’m fans of theirs. And then I went to see their live show — they’re on tour, in fact and they might be coming to a venue near you. That’s sort of a fabulous thing. And I did a little part in that movie they did and I stayed in touch. And they come to see me here and there. Tim did a lovely favor for me and participated in this movie that I did a few years ago called Pittsburgh. He did a little voiceover moment that was important to me in this thing that I did. So I’ve stayed in touch with them, and I went over to his child’s one-year birthday with him and his wife—he’s a very delightful person, they both are. Anyway, so they got in touch with me right away, said, “Do you want to do this thing?” And one thing led to another.

Was the Terry Quattro character something that they had come up with or is that your creation?

It was already conceived. Some commercial people had somehow written it and then [Tim and Eric] had polished it and contributed to it. And then they came over here to my house in a very friendly way, we went over the script, I read through it, we had some ideas, we all came up with a little tweak here and there. We came up with ideas for a wardrobe, and then those fittings, I was involved in a couple of those with very talented, friendly people when we came up with those funny costumes. They allowed me generously to have a little input here and there, and as I suspected, we had a really fun, creative collaboration. I really like those guys. They’re very good. And they had many of their usual team around them of production designers and cinematographers, so they could create their own special brand of storytelling. And I like the idea of the product — it was interesting and not bad to me, this idea of energy-saving and environmentally correct and wholesome stuff, so I like it.

I was looking back a little bit and trying to see what sort of commercial work you’d done previously, and I’d found this one called “Hilton Time.”

That’s so funny. Where did they play that? I think they played it in a specialty market.

Yeah, it didn’t necessarily seem like an American commercial.

Right. I think it was a specialty market of some kind, I can’t remember what though. Then I did some kind of computer chip something for Japanese television, and then I remember vaguely I did Holston Pils for people in Britain land, in England. Oh, and then I was early on in the Mac realm, that got turned into those funny drunken clips. That’s when I did some improvising and then I think something for PayPal. I have an ouvre, don’t I?

Well it was just so funny, because the Hilton one ended with you playing some sort of game against yourself, so this GE spot almost seems like that, but taken to the Tim and Eric level of absurdity.

Right, right. Remind me what I was doing in the Hilton one, because I haven’t seen it in a million years. I was kind of an elegant, bon vivant version of myself.

And I couldn’t tell for the longest time whether it was a parody or serious or somewhere in between. You’re kind of giving these women looks and they’re looking back at you, and the last line of your voiceover is something like, “Hilton Time means having the time to meet someon you haven’t seen in a while.” And the person who sits down across from you is you.

Oh wow, that’s right. How trippy. I’m remember now. Nice! Through the looking glass (laughs). And I like this GE one — it went online and people have been talking to each other saying nice things about it.

I’m a fan of The League and have always wondered how it came about that you ended up playing Nick Kroll’s character’s dad, which is just a perfect bit of casting.

How did that happen? Oh, you know, usual channels and contacts, like I say, but then Nick Kroll — we were friends and he’s a lovely guy and we were having a writing session with a whole group about some movie we might have been setting up for a moment, so yeah, it kind of happened through friendly channels there too, with young Nick Kroll. How bout that? And there are people who come up to me and say, “Hey lets take a picture where we make that face” that I make with him. The something face where we purse our lips and smirk — the subtly disgusted face, and I happily do that. I’m nothing if not amenable. And maybe underline the nothing. I was going to tell you about something else, but I do believe I’ve forgotten.

It seems like there’s been a lot going around in the last few months about potential sequels for Jurassic Park and Independence Day, so I was wondering whether those were things that you’d given any thought to or might be involved with?

Well, people like that Jurassic Park thing, and I think they’re making another which I tell them, I’ll be first in line for, but am not in. And then Independence Day, I had a meeting and have been talking over the last several months or year with Roland Emmerich and Dean Devlin, the producer, and they’ve been cooking up and say they have a part for me in what they hope will be a plan to make another one pretty soon.

Right. When I looked into it a bit, I saw something from a year ago saying, “Oh, maybe some people are working on it, but maybe not Will Smith,” but all of that always seems so nebulous until it actually happens.

I think you’ve put your finger on it. “Nebulous until actually” is what that file is under, but yeah, they’re still talking about it and I’ve heard recent rumblings here and there about it, and “Oh, there’s a scripting coming in” — maybe last weekend there was a script handed in, so it’s brewing.

And then a little more immediately, you’ve got Mortdecai coming up early next year.

Oh yes! David Koepp wrote both the Jurassic Parks that I was in, and makes a little funny cameo appearance in the second one where he was eaten by a marauding T-Rex. I’ve been in touch with him here and there over the years — he’s a lovely fellow, very smart, gentle, sensitive and funny. He wrote a script which reminded me of one of my favorite kinds of writing and writers, P.G. Wodehouse — I don’t know if anyone else has said that or anyone else will think that, but it’s kind of an idle, rich British marange of a piece that made me laugh. I have a moment or two in it, and I love Johnny Depp and Gwyneth Paltrow. It’s a lovely cast. I had a nice time shooting it. And David Koepp came on a night with his wife to one of the six or seven shows we did at the Carlyle last week, or two weeks ago, and so I saw him and caught up with him then.

One last one — SNL kicked off its 40th season a couple weeks ago, you haven’t hosted since ‘97, which was kind of unbelievable to me. Is that something you still have an interest in doing again?

Oh sure, I love it, love Lorne Michaels. I watch it. Working with Fred Armisen on Portlandia has been great and reminds me of that. I had a great time doing it those couple times. And people still come up to me — this is another thing, cause I think they play this on the YouTube where Will Ferrell is doing Harry Caray in that little science skit that we did — I think a lot of people are aware of that. So yeah, I’d like to do it again. 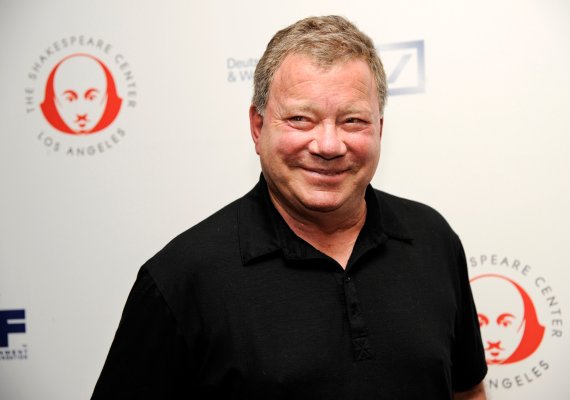 Shatner Cameo Rumored for Star Trek 3
Next Up: Editor's Pick