A scanning electron micrograph of Ebola virus budding from the surface of a Vero cell of an African green monkey kidney epithelial cell line.
NIAID—EPA
By Alice Park

A once-missing homeless man believed to have had some level of contact with Dallas Ebola patient Thomas Duncan was found Sunday, NBC news reports.

The man’s temperature was taken yesterday, and he was asked to remain available for temperature checks today and for 21 days, but left, said Judge Clay Jenkins, who is leading Dallas’ emergency response efforts. The Dallas County sheriff’s office and police department were searching for the man.

“This person has not committed a crime; he is a low risk individual. We want to move him to a comfortable, compassionate place, and care for his every need while we monitor him throughout the monitoring period,” said Jenkins during a news conference Sunday. “He is asymptomatic. We are doing this as a precautionary measure.”

The man belongs to a group of 38 people who are having their temperatures taken twice a day and asked about any possible Ebola symptoms for 21 days, since they may have had contact of any kind, even indirect, with Duncan. Centers for Disease Control (CDC) director Dr. Tom Frieden said that 10 people who had more direct contact with Duncan are being watched the same way.

Seven of the 10 are health care workers who were at the hospital while Duncan was treated, and three are from his family or community. Four of Duncan’s close relations, including his female partner and three young men living in the apartment where he stayed prior to falling ill, have been quarantined. One of these individuals, however, did not have direct contact with Duncan; however, he may have wanted to stay with his family.

The four were moved on Saturday to a more secure location and none are showing any symptoms of infection. One of the young men is able to play basketball at the new residence, said Jenkins.

Duncan’s condition worsened on Saturday, and he is now in critical condition at Texas Health Presbyterian. Frieden said any decisions about whether Duncan would be treated with any experimental therapies would be decided by Duncan, his family and his doctors. One potential treatment initially makes patients worse before they improve, and none have been approved by Food and Drug Administration because none have been tested for safety and efficacy in human patients.

The news about the missing contact in Dallas comes on the same day that health officials ruled out a potential case of Ebola in a traveler arriving at Newark airport. That passenger’s symptoms and tests did not indicate he was infected with Ebola, said Frieden. But concern about the disease has escalated since Duncan’s diagnosis. The CDC received an average of 50 calls or emails daily from doctors, hospitals or health departments about potential Ebola cases, before Duncan’s case, and that volume has jumped to about 800 inquiries a day.

Frieden stressed that keeping Ebola from spreading in the U.S. will require a combination of strong public health efforts within the country — making sure health care providers ask about recent travel history for any patients presenting with fever and other symptoms of Ebola, and quickly isolating them if they have been to West Africa — and maintaining efforts to stop the epidemic in Guinea, Liberia and Sierra Leone as well.

So far, CDC-trained screeners at airports in the three affected countries have removed 77 from boarding planes headed to the U.S., and those temperature-taking efforts, along with asking passengers about any potential contact with Ebola patients, remain critical, said Frieden. But aid efforts to help health officials in Africa are just as essential to protecting the U.S. as well.

If people are prevented from leaving or entering the three countries struggling with the Ebola epidemic, he said, then the disease will continue to rage there and potentially pose a larger threat to the global community in coming months. “As long as cases continue there, there is the possibility that someone will travel, and infect someone else in this country or other countries,” he said. “An outbreak anywhere is potentially a threat everywhere.”

Frieden will meet with President Obama this week to discuss global efforts to contain Ebola in Africa. 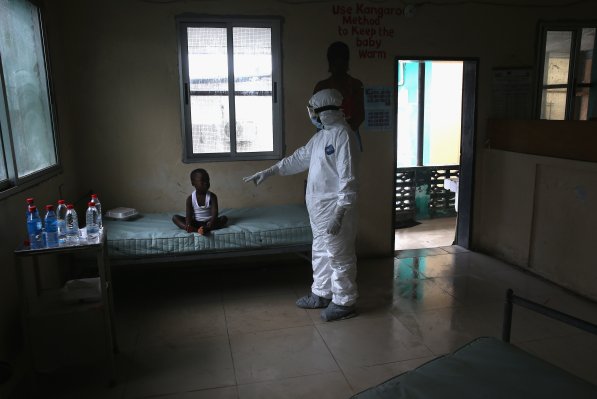 Liberians in Dallas Send Hope Back Home
Next Up: Editor's Pick