Prime Minister Benjamin Netanyahu of Israel in the Oval Office of the White House on Oct. 1, 2014 in Washington, DC.
Olivier Douliery—Corbis
By Nolan Feeney

Netanyahu told CNN’s Fareed Zakaria in a segment airing Sunday that while ISIS is “growing by day,” its power lies not in its numbers, but in “the strength of terror and fear.” Natanyahu reaffirmed previous remarks to the United Nations that “Hamas is ISIS and ISIS is Hamas” and said that he would never negotiate with Hamas as long as it “remains committed to [Israel’s] destruction.”

In addition to combatting ISIS, Netanyahu said Israel and other moderate Arab states see Iran’s nuclear program as a “twin” challenge that goes hand-in-hand with stopping the spread of radical Islam.

“They all want to get rid of Israel on their way to the Great Satan,” he said. “We’re just the little Satan. The Great Satan is the United States.”

Netanyahu said the biggest security threat in the Middle East is not border disputes but “what lies on the other side,” saying that militant Islam is “walking into the cracks” of Middle Eastern states and citing Hamas and Hezbollah presence in Gaza and Lebanon, respectively, as examples.

The prime minister said that he trusts Obama “to do what is important for the United States” but that “the jury is out on all of us” to combat these threats.

“We’re going to be tested, all of us,” Netanyahu said. “Ultimately, it’s not what we intended to do, it’s what we end up doing, especially what we end up preventing.”

Netanyahu also reaffirmed his hope for a two-state solution with Israelis and Palestinians after a summer of violent conflict between the Israeli military and Hamas forces in Gaza that saw more than 2,000 Palestinians killed. 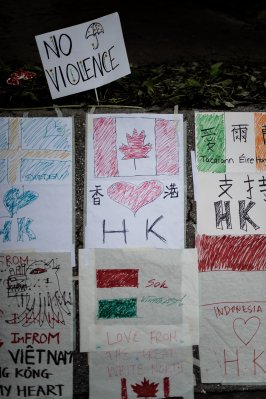 Global Support Intensifies for Occupy Movement
Next Up: Editor's Pick