Sarah Silverman made a triumphant return to Studio 8H last night–triumphant because Silverman was fired as a featured player on Saturday Night Live after appearing for just one season (1993-1994), but now, thanks to her subsequent success, gets to host the whole evening. That definitely deserves a victory lap.

The opening monologue took full advantage of her history on the show, cutting between old footage of a ’90s bit in which the baby-faced, 20-something Silverman acted as an audience plant to pepper the host with questions, and the current 40-something Silverman onstage answering herself.

The odd questions included “how does a human knee bend?” and “what did dinosaurs eat?” which current-day Silverman answered charmingly.

Last night’s episode of Saturday Night Live was far more consistent than the Chris Pratt’s season opener, with more gems than clunkers. While the writers and cast work on getting their post-hiatus groove back, it seemed like the right move to let a professional comedian host.

The Good, The Bad, The Weird:

The Best Joke: “Adam Levine, we are not stopping at Pizza Hut!” Silverman gets to yell, in a scene about a pick-up from the airport goes that deteriorates after she confesses to cheating on her boyfriend. As for most prolonged joke, the trailer for The Fault in our Stars 2: The Ebola in our Everything was timely, hilarious and strangely moving. You can’t quarantine your heart!

The Best Sketch: Pairing the production values of a political commercial with Train’s “Hey Soul Sister,” SNL‘s white cast members and Silverman gently remind white people that while they’ve had a great run, they are going to be in the minority soon. The ad encourages white people to make the most of their remaining time as a majority by hiking, camping and maybe electing four more white presidents, even if they have to be women. The sketch was especially funny as it seemed to also poke fun of itself, as SNL has continued to come under fire over the years for not casting many people of color.

The Worst Sketch: What was meant to be a funny jab at a woman’s love of her expensive blender just felt like an overt attempt at product placement. Hopefully Vanessa Bayer and Silverman got free blenders for agreeing to this.

The Weirdest Sketch: Silverman donned a fur coat and wig to play Joan Rivers roasting people in heaven. As befits a Joan Rivers tribute sketch, there were some harsh-but-funny zingers, including one aimed at Richard Pryor (“The longest relationship he had was with multiple sclerosis”). Other targets included Steve Jobs, Ava Gardner and Freddie Mercury (played here by Adam Levine), the latter of whom earned the comment, “You’re so gay, even your teeth aren’t straight.” While well-intentioned, the tribute may have fallen into the “too soon” category for the audience, and the dearth of laughs made the sketch uncomfortable to watch even from home.

Maroon 5: As Silverman asked in the cheating sketch, “Why is Adam Levine here?” Oh right: To remind the world to go buy “Animals.”

“Supportive Women”: While the sketch itself was not exactly hilarious —with Silverman, Aidy Bryant and Cecily Strong contradicting soap opera tropes and playing supportive women—Kenan Thompson’s performance as the truly odd host of Forgotten TV Gems is worth watching.

Pete Davidson: The show’s first millennial star made a strong debut last week, but was completely absent this week.

Skip: Riverboat Sisters. Kenan Thompson played a riverboat emcee who introduced a trio of singers—Silverman, Cecily Strong, and Sasheer Zamata—dressed as Tina Turner in wigs and flapper dresses singing “Proud Mary”. They interrupted their performance for heartfelt personal monologues spoken directly into the camera. The actors seemed to want the sketch to end as much as the audience did.

Do Not Skip: Weekend Update. Michael Che and Colin Jost have hit their stride as the new hosts of Weekend Update. Their easy back-and-forth about what words each of them can say (“in the club” is out for Jost and “toodle-oo” is off-limits to Che) and their quick-witted, straight-faced banter is a good omen for the future of the segment. Highlights include Che’s question about the spread of the Ebola virus into the United States (“Who goes to Texas and Africa?”) and Kenan Thompson’s Al Sharpton’s mispronunciations. 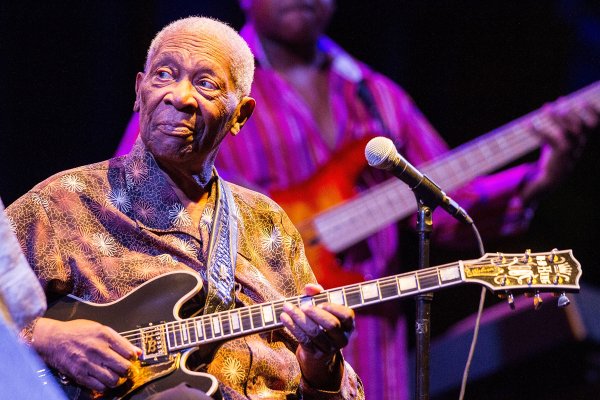 B.B. King Cancels Tour Dates Due to Illness
Next Up: Editor's Pick