Let's Give America's Royal Baby a Time Out

Former President Bill Clinton, right, and former Secretary of State Hillary Rodham Clinton, second from right, wave to the media as Marc Mezvinsky and Chelsea Clinton pose for photographers with their newborn baby, Charlotte, after the family leaves Manhattan's Lenox Hill hospital in New York City on Sept. 29, 2014.
William Regan—AP
Ideas
By Nick Gillespie
Nick Gillespie is the editor in chief of Reason.com and Reason.tv and the co-author with Matt Welch of The Declaration of Independents: How Libertarian Politics Can Fix What’s Wrong with America.

As the father of two, I can personally attest to the power of babies and toddlers to melt the coldest heart (mine) and coax a smile from the stoniest of faces (also mine). Well, my kids’ power, anyway. They were (and are) supernaturally, objectively, transcendently beautiful creatures. About yours, I couldn’t honestly say (though I kind of doubt it).

But really, is there anything more distasteful than the obviously strategic use of babies by the rich and powerful to gild their images—and the media’s feckless complicity in the spectacle? Whether it’s the British royal family constantly pushing the toddler Prince George toward the camera or breathless reports of Hillary Clinton’s newfound “grandmother glow,” can we just change its diaper, give it a pacifier, and put it to sleep already?

It’s easy to understand why Brits might take an interest in George and his parents. Not only will the 14-month-old one day rule over them, they’ve really got nothing better to do. Dr. Who is only on so many hours a day, after all. Watching the boy-king pad around on his hands and knees is a welcome diversion from contemplating a century-long slide from world domination, his father Prince William’s advancing baldness, and his grandfather Prince Charles’ continuing existence. And now that the Duchess of Cambridge Kate Middleton has taken care not to flash the commoners anymore, watching George hold court at “low-key tea parties” is about as diverting as it’s going to get in old Blighty.

But why do Americans care about this kid (or, same thing, why does the press assume we care)? There’s nothing more genuinely antithetical to American values than the wealth, titles, and leisure of the British royal family. If memory serves, we even fought a war over it. Inherited privilege brings with it a empire-sized sense of entitlement, which is on brilliant display in William and Kate’s new legal action against photographers who they claim are “stalking” the very baby they trot out daily like an exotic monkey.

William and Kate, a royal spokesman explained to CNN, want their son to have “as normal a childhood as possible” and demand that the press not publish unauthorized shots of George. Please. If you want the kid to have anything approaching a normal childhood, put him up for adoption or have him work his way up from the royal stables (sort of like how the Duchess of Cornwall did). Even America’s raggedy version of royalty—that would be the Kardashians or maybe the Duggars—understand that unearned wealth comes at the cost of your privacy and control over your image.

Controlling your image, of course, is something that Hillary Clinton knows a thing or two about. The former first lady, senator, defense secretary, and presumptive 2016 presidential candidate is a master of adaptation and continued success. Indeed, it’s tempting to say at this point that her husband is slowly being revealed as a bit player in her personal and professional epic, rather than vice versa.

During Bill Clinton’s presidential years, Hillary Clinton readily morphed from a feminist icon who would serve as co-president to a long-suffering, stand-by-your-man, cookie-baking spouse and back again. As a senator from New York, she earned high praise for pragmatism, coalition building, and bipartisan binge-drinking. Despite a patently disastrous term as secretary of state (exemplified by the violent death of the American ambassador to Libya and the failure to “reset” relations with Russia), she’s nimbly laid all the blame for U.S. foreign policy in President Obama’s lap and has emerged as an unreconstructed war hawk at a moment when Americans are calling for blood again.

If Clinton has had one blind spot in her image, it’s that she’s often perceived as less than fully human. If Bill felt our pain, Hillary either kind of enjoyed it or couldn’t be bothered to deal with it. Now that daughter Chelsea—whose undistinguished professional life is reminiscent of British royalty—has produced baby Charlotte, that’s all changing.

Hillary is missing no opportunity to publicly play at grandmother, a role that can only soften and round out her image as the presidential campaign season swings into high gear. “I highly recommend it,” she told CBS News about becoming a grandparent. At a recent speech to a group of women real estate agents, a member of the audience told Clinton that she looked “beautiful.” To which Clinton responded, “I think it’s a grandmother’s glow.”

Or maybe it’s the fire of political ambition lighting up her cheeks. As far back as June, she was systematically linking her grandchild to world events, telling People, “I’m about to become a grandmother… I want to live in the moment. At the same time I am concerned about what I see happening in the country and in the world.”

OK, we get it. The kid is a prop in a political play. The baby doesn’t just soften you up, Mrs. Clinton, it softens us up, too. Which may actually be excellent public relations but is also deeply disturbing. 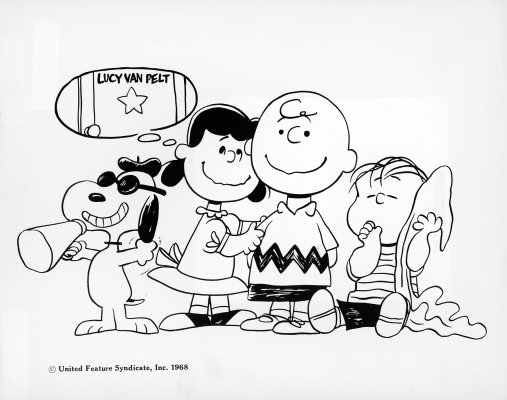 See How Peanuts Addressed Feminism, Nuclear War and More
Next Up: Editor's Pick