How Justin Bieber Killed the Mustache

RIP, the mustache. Justin Bieber’s decision to sport one in public this week might represent the final nail in the coffin for a facial feature that had already gone from being a symbol of manliness to an ironic punchline. After all, what self-respecting Brooklyn poseur can be proud to comb his lip caterpillar now that the Biebs has one?

The pop icon appeared at Paris Fashion Week Wednesday with a wispy dusting of facial frizz atop his lip. He had previously experimented with one at various points in recent months, but it now seems to have gone beyond overgrown bum fluff to an actual grooming choice. No doubt intended to be a hipsterish affectation, the mustache instead made him look like a ripe pubescent whose father hasn’t bought him a razor yet.

But the fact that the nation’s premier former teen idol apparently thinks it giddily ironic to wear a mustache in public vividly illustrates the decline of a male style choice once proudly sported by film stars, political gods and war heroes.

The early 20th century was the mustache’s prime era, when mustachioed leading men like Errol Flynn and Clark Gable ruled Hollywood, and Teddy Roosevelt could be among the manliest of presidents with a veritable slab of hair resting beneath his nose. It was fashionable for U.S. airmen to wear “bulletproof mustaches” as a superstition in WWII and Vietnam — but none was more impervious to attack than that of “triple ace” Robin Olds, whose non-regulation ‘stache became nothing less than a symbol of rebellion. It was, he said, “ the middle finger I couldn’t raise in the PR photographs. The mustache became my silent last word in the verbal battles…with higher headquarters on rules, targets, and fighting the war.”

The mustache as symbol underwent a kind of metamorphosis in the 1970s, however, when it became a signifier of gay culture and, eventually, of pornography. Although it was arguably the mustache’s masculine potency that attracted it to these subcultures, its association with them watered down its appeal to the mainstream. It had something of a resurgence in the 1980s, thanks to the heroic efforts of Tom Selleck and Burt Reynolds, but almost disappeared from popular visibility towards the end of the century, when goatees and sideburns became more en vogue.

This wane in popularity is a development some have linked to a general decline in American maleness. Here’s Wesley Morris, writing in the Boston Globe in 2009, on how the newly sensitive men of the 2000s, “afraid of seeming too serious about being male,” relegated the mustache to the vintage store bargain bin:

Today, men who wear a mustache do so with a giant pair of inverted commas on either side of it. So firmly has it become a joke that an annual charitable event (“Movember”) now exists daring men to grow one for an entire month each year — as if the act of wearing a mustache was now so hilariously out of fashion, men need to be challenged to do it.

But now that young Bieber has sported a mustache, no doubt in an attempt to co-opt some hipsterish cool for his increasingly fragile personal brand, the irony is almost entirely washed out. It’s too soon to say, but this could be the final death knell for the hipster mustache. And who would wear one then?

Morris, in his excellent 2009 essay, calls for a hero to bring the mustache back into public esteem — but the negative associations may now run too deep for that. This reporter once shaved a beard off into a mustache for a party, and was greeted with cheers, laughter and selfie invitations. But midway through the night, I caught myself in a mirror and realized my mustache was no longer ironic. To most people I encountered, it was just a mustache. I’ve never worn one again. 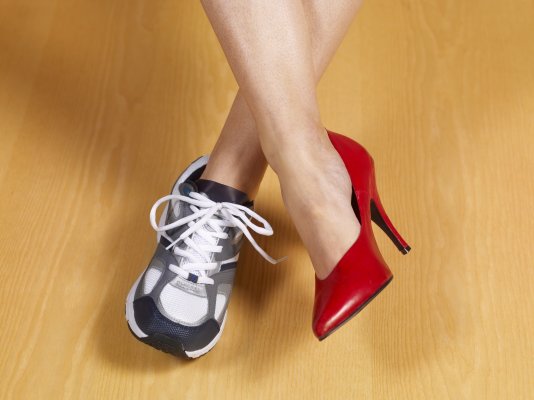 6 Embarrassing Office Wardrobe Malfunctions to Avoid
Next Up: Editor's Pick