Marina Silva was the running mate of the Brazilian Socialist Party’s presidential candidate Eduardo Campos when he died in a plane crash on Aug. 13, less than two months before elections on Oct. 5. His sudden death and her subsequent entry into the race changed the dynamic of the election. Silva tripled Campos’ share in the polls, and quickly surged ahead of the incumbent, the Workers’ Party’s Dilma Rousseff, though, with two days to go until the vote, Rousseff has now edged back ahead. As the Green Party’s presidential candidate in 2010, Silva, who grew up in poverty in the Amazon rainforest, took 19% of the vote. This year, Silva could force a second round run-off with Rousseff. A former Brazilian environment minister credited with helping slow deforestation in the Amazon, Silva spoke to TIME about her proposals for the weak Brazilian economy, her thoughts on Brazil’s relationship with the U.S., and her upbringing deep in the Amazon rainforest.

On what she would do to put Brazil back to the path to growth after it tumbled into recession this year:

On where Brazil went wrong:

“While various countries in the world during the crisis that began in 2008 were doing their homework to gain musculature and go back to growth, Brazil under the current government underestimated the crisis. And in underestimating the crisis, did not do what it needed to do. And now when all of them start to recuperate from the crisis, Brazil is suffering the consequences.”

On Brazil’s relationship with the U.S.:

“The United States is an important country from the economic point of view, from the cultural point of view, ecological, and it is desirable that this partnership should be increasingly deepened, safeguarding the interests of both parts.”

On the 2013 allegations that the National Security Agency eavesdropped on Brazil’s President Rousseff and state-controlled oil company Petrobras:

“This created great discomfort in our diplomatic relations but we have to work so that this mistake can be repaired. Obviously for it to be repaired there needs to be a gesture from the country that committed the invasion of spying. And we have the opening for this episode to be overcome in the best possible way and we will always defend our sovereignty with vigor, the protection of our interests, but we don’t think this should deepen the crisis, the separation. Very much on the contrary, we want space for cooperation.”

On whether she would have cancelled a state visit to Washington as a result of the scandal, as President Rousseff did:

“Any government that feels invaded has to have a strong gesture. You can’t suffer an invasion of the protection of our security in terms of information without a strong reaction. I don’t imagine that if the United States had been spied on, that it wouldn’t have had a strong reaction.”

On the mass street protests that swept Brazil in 2013:

“What society was demonstrating was that in Brazil, in the world, there is a big change underway. A new political animal is emerging. This new political animal no longer moves in the way it used to, directed by the parties, by the unions, by the NGOs, or by charismatic leaders. This new political animal, that is mobilizing in the whole world, in the United States, in Europe, in Asia, in Brazil, is the fruit of the technological changes that happened, which provided communication from person to person, as in the case of the internet. They are authors, they are mobilizers, they are protagonists, they are people who do not want to be political spectators, they want to take on a political role, live, experience.”

On growing up in a family of rubber tappers in the Amazon forest:

“It was a very significant life, with many difficulties, but at the same time, with a lot freedom, with a lot of creativity, with a lot of learning, a lot of affection. I was a very stimulated child. We were eight siblings. Seven women with me and a man—except that my brother was one of the youngest. From the age of four, for five years, I was raised with my grandmother, in a house in the middle of the forest, a wooden shack on stilts, that was some 15 minutes from my father’s shack.”

On what she learned from her childhood: 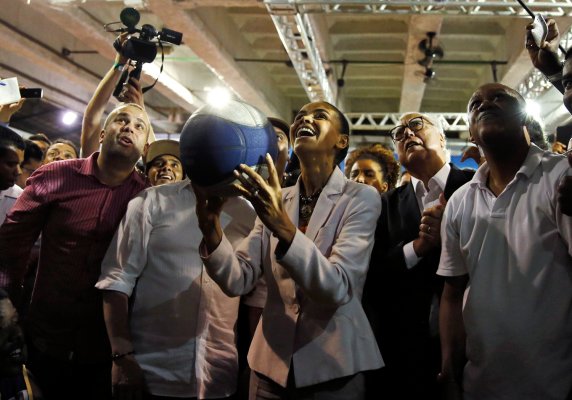 Marina’s Moment
Next Up: Editor's Pick