Behind the Messy Science of Police Lineups

Thomas Haynesworth answers questions from the media after he was released from the Greensville Correctional Center in Jarratt, Va., on March 21, 2011.
P. Kevin Morley—Richmond Times-Dispatch/AP
By Josh Sanburn

In 1984, Thomas Haynesworth—an 18-year-old resident of Richmond, Va.—was accused of rape by five women, one of whom had identified Haynesworth by spotting him on the street. Later, four other victims picked his face out of a police lineup. That was the man who raped them, they said. One of them even told the jury, “He had a face I couldn’t forget.”

Haynesworth was convicted in three of the attacks and sentenced to 74 years in prison. But he was innocent.

In 2009, DNA testing linked Leon Davis, who had been convicted of other assaults in the Richmond area around the same time, to one of the women who initially accused Haynesworth of rape. Several attorneys eventually investigated the cases involving Haynesworth and reached the conclusion that in fact Davis was responsible for all three rapes. In March 2011, Haynesworth was released from prison after almost 30 years behind bars. In December, he was fully exonerated.

The Haynesworth case is one of the most egregious to emerge from the fallibility not only of human memory but of police lineups and the way they’re often conducted around the country.

Most people think of the lineup the way it’s often shown in movies or on TV: You bring a handful of unsavory guys into the police station. One of them is the real suspect while the others are just fillers. Then the witness immediately points and says, That’s him!

But few departments conduct lineups today with live suspects. Most use photo arrays, sometimes on a computer, that are presented to a witness. Over the last few decades, a handful of researchers have studied the way those lineups are administered with troubling conclusions: Too often, police lineups lead to eyewitness misidentifications, put innocent people in prison and allow the real culprits to go free.

According to the Innocence Project, eyewitness misidentification has been a factor in 72% of convictions that have been overturned by DNA testing. The National Registry of Exonerations, which works in conjunction with the University of Michigan, traces 507 of the 1,434 exonerations back to mistaken witness identification. But according to researchers, many police departments don’t know the underlying problems associated with troublesome lineups, don’t have the resources to conduct better ones, or are confused as to the best way to go about them.

On Thursday, the National Academy of Sciences, a non-profit organization of experts and academics around the U.S., released the first comprehensive report to review decades of literature on lineups while offering sweeping recommendations on how they should be conducted, including ensuring that those administering them are not aware of the suspect’s identity, developing standard instructions for witnesses so as to not bias their pick, videotaping the ID process and recording confidence statements from witnesses at the time of an identification.

“Eyewitnesses that lead to erroneous convictions are very disturbing,” says Tom Albright, a professor at the Salk Institute for Biological Studies, who co-chaired the committee. “It’s bad for society if the bad guys go free, and it undermines the criminal justice system, which is a serious long-term problem potentially.”

A number of factors can affect a person’s memory, especially in a charged moment like when a crime is taking place. If someone has a gun, for example, we’re more likely to pay attention to the weapon than the face of the person holding it. Our emotions and internal biases can alter the way we remember an incident. Or maybe the problem comes from something as simple as the angle from where someone witnesses a crime and an inability to get a good look at the perpetrator.

“I argued that what we should be concentrating on are the variables over which the justice system has some control and help advise the legal system about how they might reduce the likelihood of mistaken identifications,” says Gary Wells, an Iowa State University professor who has been the leading researcher on lineups for years.

Wells was essentially a one-man shop of eyewitness research through the 1980s and into the 1990s. He helped introduce the idea of the double-blind procedure, in which officers who were administering a lineup didn’t know the real suspect from the filler picks. By doing so, officers couldn’t ask leading questions that could bias the witness. He championed sequential lineups (photos shown one at a time) over simultaneous lineups (photos shown together and often six at a time), arguing that it was a more difficult task for eyewitnesses and would provide a higher standard for IDing a suspect.

But his research often went unnoticed, remaining stuck in the halls of academia and not taken seriously by law enforcement or merely unknown to officers in the field.

“I think we’d still have this huge gap where the work we’ve done would be written off as pointy-headed researchers in the lab,” Wells says, “until the DNA exonerations came.”

Around the late 1990s, as DNA testing took off, it turned out that a number of false convictions could be traced back to witness misidentification. Soon after, then-Attorney General Janet Reno created a working group that included Wells to produce some basic guidelines for how police departments in the U.S. should conduct lineups.

In the last 15 years, a number of police departments have begun taking those reforms seriously. Baltimore, Boston, Dallas, Denver, Minneapolis, Philadelphia and San Diego have all changed the way they conduct them in the last several years, and most of those agencies have implemented blind, sequential procedures.

For the most part, the recommendations released by NAS on Thursday endorsed many of the things for which Wells has been long arguing. The report calls for law enforcement agencies to provide officers with training on vision and memory as well as guidance on how to prevent contamination of a witness with leading questions that could affect their decision-making. It also calls for double-blind lineups and standardized instructions to inform witnesses that the suspect may or may not be in the lineup. It pushes agencies to document confidence judgments from witnesses at the time of an identification, confidence that can often irrationally grow in strength by the time they’re called to the witness stand. And it urges agencies to videotape the entire ID process.

However, it doesn’t recommend sequential or simultaneous lineups, in part because the academic debate over the two has gotten messy.

A new way of studying the accuracy of a lineup has emerged in the last few years, most prominently by John Wixted of the University of California-San Diego, who uses something called a “receiver operating characteristic,” or an ROC curve, which takes into account witness confidence in an identification. Eyewitness confidence numbers are plotted along the curve and appear to show that administering a simultaneous lineup has produced more accurate IDs than sequential ones. Other ROC studies appear to have similar findings.

Another study conducted by Wixted and Karen Amendola of the Police Foundation has analyzed lineup selections as they relate to the strength of evidence in actual cases over time in Austin, Texas. That study also appears to have found that sequential lineups are not superior to simultaneous ones and that, in fact, innocent suspects are less likely to be mistakenly identified from simultaneous lineups.

Some researchers, however, dispute those studies. Among the naysayers is Jennifer Dysart, an associate professor of psychology at John Jay College of Criminal Justice.

“They’re getting these really crazy data that are completely inconsistent with the general pattern of results,” Dysart says.

She says she believes Amendola has incorrectly analyzed her numbers regarding the Austin evidence-based findings and didn’t have a sample size big enough to conclude that simultaneous lineups are a superior method. But she also believes there may be ulterior motives at work in the new ROC analyses done by Wixted and others.

“I think they want to take down Gary because he’s been the lead researcher in the field of eyewitness identification for over 35 years,” she says.

“There’s a lot of noise out there,” Wells acknowledges, referring to the ongoing simultaneous/sequential debate. “I think it’s fair to say that it’s unresolved at the moment. I have a feeling that in the end, we’re going to end up discovering that there’s not a huge difference between them.”

The NAS recommendations steer clear of the back-and-forth entirely. But most lineups researchers praised the report’s findings overall, including Wells.

“This is a huge shot in the arm,” Wells says. “It’s a ringing endorsement of the science. And now we have the task of bridging the gap between the science and the legal system.” 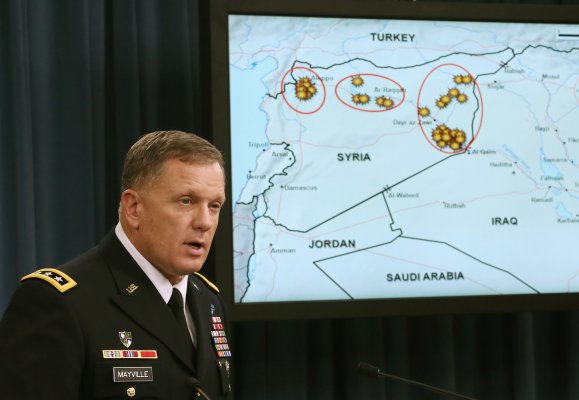 Pentagon Unsure What to Call Its Operation Against ISIS
Next Up: Editor's Pick