Kim Jong Un waves to spectators and participants of a mass military parade celebrating the 60th anniversary of the Korean War armistice in Pyongyang on July 27, 2013.
Wong Maye-E—AP
By Hannah Beech

It has been precisely a month since corpulent young dictator Kim Jong Un disappeared from public view, prompting frenzied speculation about his health and the state of political play in North Korea.

Kim was last seen at a Sept. 3 concert, ensconced in a red easy chair next to his wife, Ri Sol Ju. Late last month, the youthful marshal was a no-show at a meeting of North Korea’s rubber-stamp legislature. The cloistered nation’s state-run TV aired images of his seat at parliament—empty. Rumors began flying as the disappearance ran into weeks that Kim was either dying or had been deposed. But North Korea experts say that the likeliest reason is also the simplest: That the Supreme Leader is sick.

Video of Kim at a July event marking the 20th anniversary event of the death of his grandfather, North Korea’s founder Kim Il Sung, showed him walking with a peculiar gait. In July footage, he was clearly sweating. State-run TV acknowledged that Kim was suffering from “discomfort.” Chosun Ilbo, the South Korean daily, translated a TV voice-over aired last month that praised: “our marshal, who lights the path of leadership for the people like a flame, although he was not feeling well.”

Yonhap, the South Korean news agency, has speculated that the latest scion of the three-generation Kim ruling dynasty may be suffering from gout, a form of arthritis nicknamed the king’s malady because it can be triggered by a rich diet and sedentary lifestyle. Both Kim’s father, Kim Jong Il (known as the Dear Leader), and his grandfather (referred to as the Great Leader) suffered from gout, according to Yonhap.

Photos of Kim taken since he assumed power show a rapidly expanding man, at least in terms of his girth. Obesity is a risk factor for gout. “The guy is seriously overweight,” says North Korea expert Andrei Lankov, who studied in Pyongyang in the 1980s and now teaches at Seoul’s Kookmin University. “It’s not good when you’re talking about a country where so many people are malnourished.”

With limited information available about Kim, North Korea-watchers are often left to dissect state-media coverage of his trips to factories or army installations that aim to capture the hereditary dynasty scion in all his glory and magnanimity. A photo released by the official North Korean Central News Agency in August, for instance, shows a grinning Kim at a military-run factory, standing next to a conveyer belt churning out twists of dough.

North Korean state media reports also serve to educate local elite who know how to read between the lines. “These are signals but signals only for people in the know,” says Lankov. “I am quite sure the official media reports about his ill health would have been signed off on by the great man himself.”

Another possible hint that Kim is not fully incapacitated, as some of the wilder North Korea rumors have it: a leadership shuffle was recently announced in Pyongyang. “I don’t think that would have been authorized without him,” says Lankov. “He may be undergoing some sort of treatment but I’m pretty sure he’s capable of making management decisions.”

Kim has vanished from public view before, 10 days in July, for example, as well as 18 in January. But this is his longest absence from state news coverage since taking over from his father in December 2011. Still, North Korea-watchers caution against the conspiracy theories involving coups or intricate power plays involving members of the Kim clan. John Delury, a professor at Yonsei University in Seoul, notes that North Korean officials have been busy in recent weeks globe-trotting on a “major charm offensive.”

“If there had been regicide or revolt in Pyongyang, it’s unlikely the wheels of North Korean diplomacy would spin like business as usual,” Delury says. “These episodes [like Kim’s absence] reveal as much about us as them—our own assumptions, even obsessions, when it comes to North Korea. We assume North Korea must be on the brink of collapse, so when the young leader suspends his relentless ‘onsite guidance visits’ for a few weeks, we assume he’s been overthrown. Precisely because we have fewer sources of reliable, direct information about North Korea, it pays not to rush to judgment.”

On Wednesday, at the Asian Games being held in Incheon, South Korea, the North Korean women’s soccer squad captured a surprise gold medal by defeating the Japanese team. At the press conference, the North Korean skipper said the “players trained with dedication and never stopped fighting,” the AFP reported, “to return the warm love of our dear leader Kim Jong-Un.” 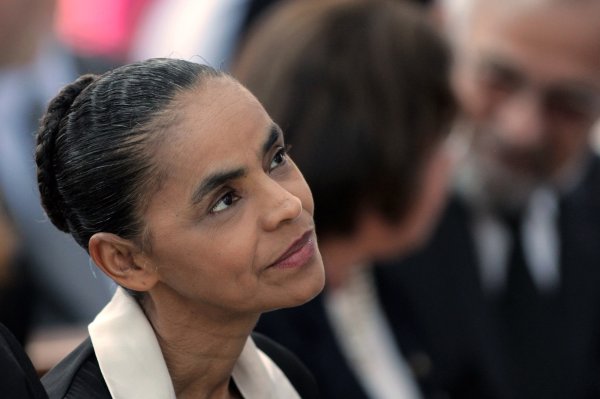 Marina Silva Speaks to TIME as Brazil's Presidential Race Enters the Homestretch
Next Up: Editor's Pick