With his office surrounded by student protesters, Hong Kong’s embattled, Beijing-backed leader, Leung Chun-ying, said late Thursday night, local time, that he would not resign as chief executive, but offered students the chance to meet with another official, Chief Secretary Carrie Lam. He said the dialogue must be based on the Basic Law and framework of the National People’s Congress — effectively a nod to Beijing.

The announcement, which seems unlikely to please protesters, was made just before midnight as police and pro-democracy demonstrators were locked in a tense standoff outside government headquarters. Earlier in the evening uniformed police officers carried what looked to be riot gear into the walled compound. Protesters responded by calling more people to the scene, setting the stage for a long, tense night.

The mood in Hong Kong remained as delicate as it has been since the night of Sept. 28, when riot police fired tear gas into a crowd of pro-democracy demonstrators rallying in the heart of the city. Photographs from the scene showed people in makeshift protective gear — swimming goggles, plastic wrap and raincoats — using umbrellas to shield themselves from the smoke. The images spread quickly, fueling outrage over the use of force. And the “Umbrella Revolution” was born.

The police withdrew as tens of thousands of Hong Kong people took to the streets, shutting down major thoroughfares from the financial district on Hong Kong Island to densely packed neighborhoods across the harbor, in Kowloon. For three days and nights, these sites became parallel cities. People slept on the pavement, hung banners and sang songs. They called for the resignation of Leung, and full democracy. To some, it felt like victory.

But on Oct. 2, the mood changed. A front-page commentary in a Chinese Communist Party mouthpiece, the People’s Daily, suggested the central government was in no mood to compromise. “The actions of “Occupy Central” have flagrantly violated the laws and regulations of Hong Kong, severely obstructed traffic and disrupted social order,” it reads. “If matters are not dealt with according to the law, Hong Kong society will fall into chaos.”

At the same time, movement organizers gave the government an ultimatum: Leung Chun-ying goes, or we escalate. Some planned to block access to Leung’s office Friday morning to force the head of Hong Kong’s government to come out to face the crowd.

After Leung’s press conference, the scene outside the Chief Executive’s Office was tense, but there was no violence. To the south, in the shadow of the People’s Liberation Army’s headquarters, stood dozens of police officers. To the north, closer to the harbor, were thousands of demonstrators. The crowd swelled out into the road, spurring repeated warnings from the police.

At 1 a.m., student leader Joshua Wong urged calm. He said the students must put safety first, and should be patient. Soon after, Occupy Central With Love and Peace (OCLP), one of the groups involved in the demonstrations, issued a statement: “OCLP hopes the talks can provide a turning point in the current political stalemate,” it reads. “We will fully support the students in the process.”

As of 7 a.m., Leung’s office remained surrounded by several hundred protesters. Thousands more were camped out on nearby roads. What comes next? “We’ve discussed it all night,” said a woman surnamed Tsui. “But we still don’t know what to do.”

One demonstrator, Mart Kwok, 28, said the protests should be widened. “We should get more people to support us, not just students, but more workers. More strikes. If we get larger, we can’t be ignored.”

Despite the tense atmosphere at the barricades, dedication remains high. Woody Yip, 23, told TIME that she quit her job because of the protests. “I have given up my job. I know that this will be a long time and I can’t leave this.”

Added Fiona Chau, a 20-year-old student, “I think most of us are frightened, but we are doing the right thing. So we can’t be scared.” 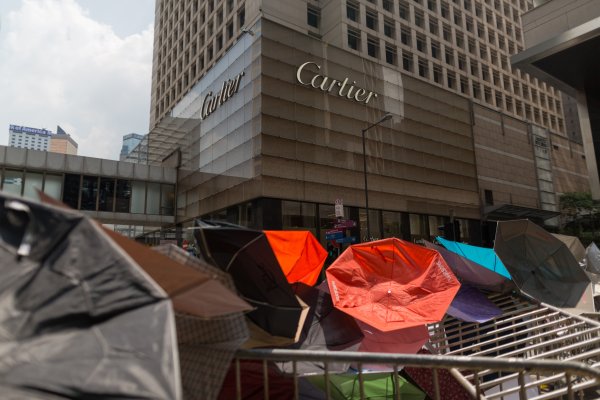