In her years as Time’s Bureau chief in Afghanistan, Pakistan and the Middle East, Aryn Baker, who now covers Africa, has embedded with U.S. soldiers and covered their hazardous missions–but even that did not fully prepare her for the risks of reporting from Liberia on the war against Ebola. News of the first confirmed case in the U.S. underscores what her reporting shows: unless much more is done much more quickly, the toll of the disease in West Africa could grow exponentially, destabilizing whole parts of the continent and, in the most dire CDC projection, striking as many as 1.4 million people by January.

The challenge in covering this story is physical, certainly, but it is more than that. Putting on the required protective gear is relatively easy: Tyvek bodysuit, hood, goggles, face mask, rain boots with booties over them, one pair of gloves taped to her sleeves, then another on top of them, so not an inch of skin shows. “It doesn’t take long for the whole contraption to start fogging up with sweat, heat and humidity,” Aryn says, “so it’s helpful to be taking video on my iPad–that way I can review the footage later, when I’m not peering through a foggy mask.”

The dangerous part is getting out of the suit, making sure that the outside layers, which are potentially contaminated, don’t make contact with the inside layers. This means being sprayed down with a chlorine solution, leaning forward to take off the goggles, making sure no sweat runs down into her eyes. More chlorine, then a gradual removal of layers, more spraying, until she bundles up all her protective gear and throws it in a garbage bag to be incinerated. “The process takes about 10 minutes, but it feels like much longer because I am concentrating all the time on not making any mistakes,” she says. “When I’m out with the body-collecting team or the ambulance team, I will do this five or six times in a day.”

“At night I sometimes wake up in a panic, thinking about the time I touched my face with my gloves by accident, or how I leaned against a wall to steady the camera,” she adds. She keeps a thermometer by her bed, so she can check her temperature to make sure she is not running a fever.

It is strange to be in a place where you can’t touch anything: no shaking hands, no comforting a woman whose mother has just died, no tap on the back when she wants to get someone’s attention. “I never thought before how much touching is a part of how we communicate,” Aryn says. “I saw a little girl the same age as my daughter fall down in the street the other day, and it went against every instinct I have as a mother not to rush in and pick her up. One of the nurses at the temporary orphanage I visited told me that sometimes she puts on a protective suit just so she could hug a crying child in need of comfort.”

Aryn has become used to the sight of death, even people left to die in the streets because there is no place for them to go. But every day also brings examples of a deep and abiding compassion and courage on the part of caregivers: the Liberian nurse who spent three times the recommended time in her moon suit so she could meet each patient’s needs; the American educator who has turned her school into a short-term orphanage for children whose parents have died of Ebola and whose relatives won’t take them in for fear they also carry the disease.

That, too, is a part of this story: when the worst that nature throws at us uncovers the best that human nature affords. 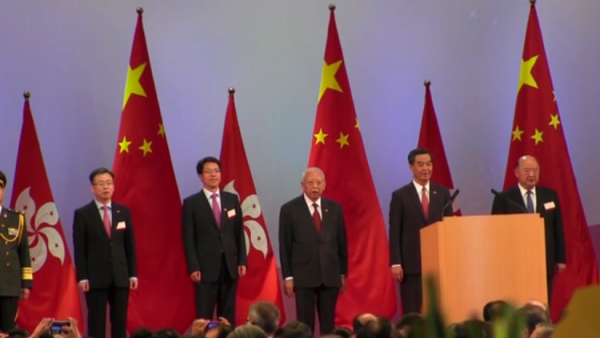 Hong Kong Marks National Day With Demands for Reform
Next Up: Editor's Pick