Sigourney Weaver: Why I Signed On for Alien: Isolation

In the 35 years since Alien was released, the classic movie has been the source of inspiration for several video games — but Alien: Isolation, out Oct. 7, is the first one that snagged star Sigourney Weaver to voice the part of Ellen Ripley. Though the main game focuses on Ripley’s daughter, Amanda, Weaver’s character shows up in some of the game’s extra downloadable content.

Here, she talks to TIME about why she decided to return to the Alien world, what that was like and whether she’d ever go back to it on the big screen.

TIME: How’d you get involved in the game? Why this one?

Sigourney Weaver: I had been approached to participate in a couple of different Alien games but I felt that this one was very different. First of all, there was a desire to put the player into the world that [director] Ridley Scott created, which is quite a terrifying one, and to let you loose in this situation that was so powerful in the first movie. That’s the experience of the game that I had to do with. The regular game, what touched me about it right away was Ripley’s daughter Amanda, who’s mentioned so briefly in Alien — there’s a whole other life, a story about her and her colleagues in space and the connection between her and her mother. They’d never had that connection because Ripley died or disappeared so long ago. So I was immediately intrigued by the idea that they had chosen to pick up this small but potent detail and turn it into an experience.

How was it pitched to you?

They did have to educate me in what kind of game it was. This was a very passionate homage to Ridley’s work that I think is quite unique, and to recognize that people would love to be in that world, navigating this empty, not really empty, ship, with a flamethrower. I thought it’s pretty juicy.

What’s not to love?

Again, I’ve only seen my part of it. The other part of the game, which has to do with Amanda and a whole other generation, I’m looking forward to seeing.

Are you a gamer yourself?

We have Grand Theft Auto and Crazy Taxi and stuff like that. My husband and daughter are enthusiastic, and I enjoy it. And I’m actually delighted that games are expanding and giving you more substance besides the basic target practice. Now it’s a much more immersive experience for the player, in a sense the player gets to do what we actors do, which is to go into a make-believe world and totally believe that you’re there. Of course, we don’t get killed quite as often. Or, if we do, we don’t get another chance to come back.

That’s a cool way to look at it. When did you first see that similarity with acting?

I think after Avatar, I realized that people really love going into these worlds and having an experience. I totally get that. It’s just going to get bigger and bigger and this is a particularly cool entry into this world.

What was it like to return to the character?

As if I’d never stopped doing it. I opened my mouth and I heard her voice. It was a surprise to me. It was a powerful experience.

It’s been 35 years. What do you think has allowed the movie to have such extreme cultural staying power?

I have to credit Ridley for creating an experience of space which was so much closer probably to what it would be like — a real place where people work, a dirty, gritty real environment with a real company to work for that has other priorities. I thought he brought such a fresh eye to the world of science fiction, which, frankly, was usually pretty sterile, and certainly not haunting and creepy. [Other sci-fi] was sort of fantastical with girls in tiny bathing suits, the ones I’m thinking of. It was a very visceral experience to make the film so it doesn’t surprise me in that sense that it would still be a very visceral experience for an audience member, even today, to watch it. The interesting thing about science fiction is that it’s always relevant. It’s always out ahead of us. And I do think people love to be terrified. Alien terrifies you in a wonderful and eerie and elegant way.

It was one of your first on-screen roles…

Well, you’re very kind to say I’d done anything before. I had a walk-on in Annie Hall and a tiny part in an Israeli film. I didn’t know anything when I started and I remember the first week, Ridley came up and said, ‘Can you try not to look in the camera?’ I said, ‘I am trying not to look in the camera but you keep putting it right in front of me.’ I didn’t know anything! I hadn’t really thought much about film. As an actor, I was pretty fixated on theater and a lot of it was classical theater, so I was just in heaven running around these gorgeous sets. I couldn’t believe they had created this whole world, making it so believable, for me. And I learned everything on that film.

You recently did another Ridley Scott movie, Exodus: Gods and Kings, which is coming out soon. What was it like to work with him again?

He hasn’t changed much. He’s a genius with a camera, and all the details of this world were fantastic. I just felt so incredibly thrilled that I got to be an Egyptian queen, something I’ve wanted to do since fourth grade.

Get out of the way of the chariots! That’s going to make a great game.

Would you ever do another Alien movie if it became a possibility?

I was loath to do a fifth one — we were supposed to do 4 and 5 together, and I felt that I was very ambivalent about that. At the same time, I’m aware that we never finished the story. Part of me would be very intrigued by doing that with the right director. But beyond that, it’s just an idle thought. 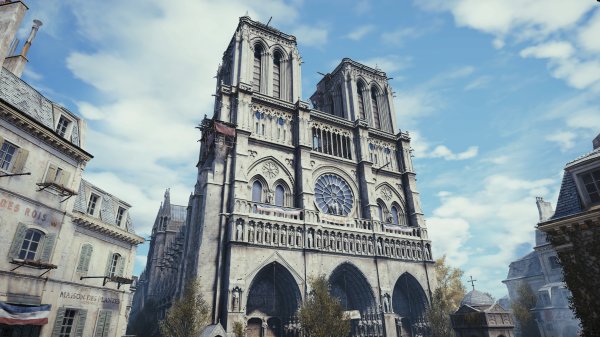 Assassin's Creed Unity Will Only Run at 1080p on PCs
Next Up: Editor's Pick